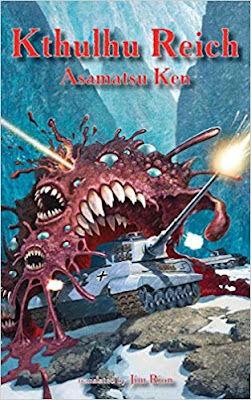 Rudolf Hess battles the elder gods. Adolf Hitler monkeying around with black magic books after he dropped out of art school. A female vampire lures Nazi soldiers to her castle and tricks them into setting in motion an apocalyptic plot. So you thought Dennis Wheatley was the only writer obsessed with Nazis and black magic? Think again.

Kthulhu Reich (2019) is a collection of bizarrely over-the-top, sometimes ludicrously entertaining, horror stories from the fertile imagination of Asamatsu Ken. The tales have been meticulously translated into English by Jim Rion, an expatriate English teacher and translator formerly of Kansas now living in Yamaguchi prefecture. Publisher Edward Lipsett of Kurodahan Press assures me that while Rion’s translations seem to be near parodies of the Weird Tales school of writing they are accurate and in the spirit of the original Japanese texts. I found them to be generously peppered with enough American vernacular and colloquialisms to give the stories a retro-pulp magazine feel. Lipsett joked that though I may think they may be too Western or “Americanized” these are German characters written by a Japanese writer who speak in Japanese in the original stories and now English in this translation. But in all accounts they should be speaking in German! No matter. They do indulge in the typical “Ja wohl, Herr Kapitän!” we are used to hearing from British accented actors who play Nazis in the old war movies of days gone by. 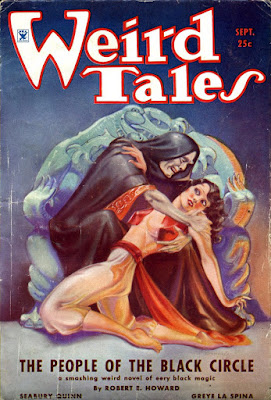 I didn’t really know what to make of this book before I cracked it open. I figured I should prepare myself for some kind of Dennis Wheatley/H. P. Lovecraft mash-up by way of Japanese worldview. Was I ever wrong! These stories could easily have been lifted from the pages of any of the American shudder pulps. Rion, the translator, must clearly be a fan of the kind of stories Lovecraft and all his imitators wrote back in the day. So faithful are these stories to the spirit of Lovecraft’s Cthulhu Mythos that the entire book is annotated with scholarly footnotes that make it sound as if the creatures encountered in the pages are actually real. In addition to the detailed descriptions recounting the history of Lovecraft’s many “elder gods” that appear in the book, along with the lives of Lovecraft characters (and those created by Derleth, Bloch and Robert E. Howard) there are eye-opening footnotes on the historical facts surrounding the occult interests of Rudolf Hess and his influences on Hitler. We also learn about the members of The Hermetic Order of the Golden Dawn who were also wrapped up with the Axis powers and German soldiers. Who knew there were magicians in wartime England sympathizing with the Nazis?

But onto the stories themselves… 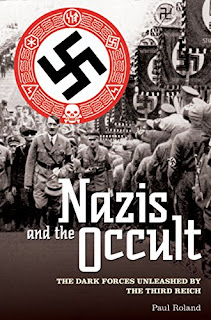 Those that are modeled after Lovecraft and pay homage to his Cthulhu Mythos are by far the most entertaining. Minor stories like “The Colonel’s Self-Portrait” and “April 20, 1889” rely too much on gimmicks. The first is a shaggy dog story with an ending I should’ve seen coming from page two. The other is done as a collection of diary entries and letters. Both stories are less effective if the reader is an avid student of World War 2 history. The title of the second is a dead giveaway to the final twist and lessens the power of what might have been an eyebrow raising surprise on the last page had it been named anything else. And a warning to the fainthearted (are there any among horror fiction fans?) -- "April 20, 1889" also deals graphically with the Jack the Ripper murders and goes into disgustingly obscene detail in how the crimes were committed. Splatterpunk fans have something to look forward to there.

The most successful and effective stories of the seven in this volume are those that abandon the traditional trappings of vampires and witchcraft and go all out in depicting the wild adventures of trippy black magic obsessed Nazis.  The footnotes tell us that a lot of this stuff is based on fact. That's double the trippiness for your buck right there.

First published in separate issues of Hayakawa S-F in 1994 and 1995 two stories make up one long novelette of recurring themes and characters. These two should be read in the order as arranged and saved for last for they are truly the cream of the crop in this nifty book. The first of this double feature "The Mask of Yoth Tlaggon" is like a Hammer horror movie on paper. Instead of Charles Gray as the evil sorcerer I'd cast the more appropriate Klaus Kinski as the evil Rudolph Hess, Hitler's Deputy Führer, bent on mastering the universe and conquering Third Reich with the help of an ancient artifact that allows the wearer to commune with powerful gods from an alternate universe.  It's a wild ride of a story that almost tops the best scenes in Dennis Wheatley's masterful occult thriller The Devils Rides Out. Hess is joined by Tatewaki Goto and Clara Haffner, two intelligence agents in disguise as diplomats. Clara is also "a runic magus" well versed in reading the language of ancient spells that will come in handy during the rousing climax, an operatic showdown of black magic and phantasmagorical visions.

The saga of the Mask of Yoth Tlaggon continues in the story immediately following “In the Wasteland of Madness” in which a young aristocratic Nazi, Major Erich von Müller, is forced to wear the mask and report what he's seen. His visions offer up clues of an impending expedition to the Antarctic where Kriegsmarine Leutnant Krenze, the brawny, blond haired "very model of a German soldier" expects to uncover the lost world of Thule, believed to be the origin of the Aryan race. What they discover there instead is more horrifying than beautiful.  Lovecraft fans will eat this one up. Once again the plethora of footnotes fills in the background on the origins of the strange creatures, the lives of the historical figures who appear or are mentioned in passing, and the litany of arcane occult texts and forbidden books created by Lovecraft and his acolytes. It's hard to believe that the Nazis genuinely were involved in explorations of the occult and black magic, but there are documented facts to reveal it is in part true. The legendary and secretive exploration of the Antarctic seems to be more anecdotal and apocryphal than factual though many people believe it did take place. What the German soldiers discovered there is left to the imagination of the true believers and writers like Asamatsu.

This is a bizarre and surreal example of mash-up of fact and fiction that delivers the goods in three of the seven stories. Reading these stories seemed like a flashback trip to the 1960s drive-ins that used to show Hammer horror movies overstocked with bloodthirsty vampires and vengeful creatures from the dark side.  I had a blast reading this book, loved the Lovecraft homage, and recommend it to  the horror hounds out there in search of something completely different.  Dennis Wheatley and Lovecraft I'm sure are smiling somewhere in the Great Beyond knowing that this book exists.
Posted by J F Norris at 11:02 PM