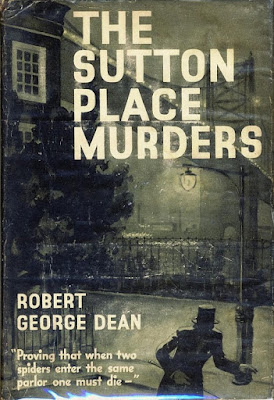 THE STORY: Murder and mayhem in the financial world of 1930s Manhattan. Insurance investigator Paul Andrew Thompson (he goes by Pat, the first initials of his name) is hired to prove a suspicious death is suicide so his firm can avoid paying out the $250,000 policy. But when another suicide occurs Thompson is certain that a killer is disguising his work, what the newspapers will soon dub The Sutton Place Murders (1936).

THE CHARACTERS: While the story seems dominated by men (police, lawyers, the district attorney and several business associates of Harry Mitchell, the drowned man the insurance company believes killed himself) the real interesting characters are the women. Susan Barton, is Thompson's girlfriend who as a reporter has access to the "morgue" and archives of her employer. She is enlisted to help dig up dirt in the past lives of several female suspects. Susan has several theories about how the crimes were committed. The scenes with she and Pat are probably the best in the book.

Whenever Pat is interacting with a woman character like sly and evasive Alice Woods or vamping Laura Hess the book becomes much more interesting. Even the eccentric widow Louise Mitchell and a seemingly insignificant maid like Madeline Hine are better delineated with intriguing quirks than the many cookie cutter male characters we have encountered over and over in crime and detective fiction of this era. As the story progresses it becomes clear that the women are the ones the police should be paying attention to. Plots and schemes are uncovered and a deadly game of blackmail seems to be at the root of all the mysterious deaths.

INNOVATIONS: Dean likes to emulate the hardboiled style by laying it on heavy with banter and wisecracking dialogue. "Pat" Thompson could have been a great long-running series character. It's a shame that he appears only in three books. The scenes with Pat and Susan are the liveliest parts of the book and sound similar to the repartee you hear in movies like The Thin Man series and other urban and urbane crime films featuring husband/wife or male/female detective pairs.

The detection in the book is surprisingly well done. One of the better examples involves the typewritten suicide note purportedly left by Laura Hess Pat does some inventive thinking which leads him to believe the suicide was staged and the note clearly not typed by the victim. He also wants to know if Harry Mitchell's death was a suicide then where was his note? Clues related to clothing play a big part in the plot too. Susan offers up some ideas that most of the men would never think of and is convinced that one of the suspects, Louise Mitchell, is a man-hater if not a lesbian as some of the men later surmise.

The talk of lesbianism in the book is done rather frankly and colloquially for a 1930s book. When Susan remarks that Louise Mitchell has no man in her life Pat quips, "You mean she's a Les?" Later eyewitnesses report seeing someone dressed in men's evening clothes having visited Louise in secret. Everyone thinks it's a man, but Susan is certain it was woman in disguise. Many of the men start making bad jokes about lesbians thereafter (see "Things I Learned" section below).

QUOTES: (After waking up with a hangover Pat says to himself:) So this is what comes of trying to drink a woman under the table. Just a sacrifice on the altar of insurance!

The Frenchman was tall and thin like an adagio dancer; his complexion pale, almost sallow; and his face was the type that would be termed handsome by some women for whom life had begun at forty.

Pat: That means you do really adore me, under that scant veneer.
Susan: As one strip of veneer to another, let me repeat for your dull powers of comprehension; I hate you. Vindictively, I might add.

Pat: I'm giving you the chance to a flaunt your deductive powers.
Susan: Mmmm, I see. This is the page where they put the notice: 'Dear Reader, you have been given all the dope; now, it's up to you.' Well you can go to hell Mr. Sporting Opportunity Thompson!

THINGS I LEARNED: Cholly Knick is mentioned in passing. In the context I figured he was a writer. My assiduous Googling revealed the name to a shortened form of Cholly Knickerbocker, the house name for a gossip column created by reporter John W. Keller who started his career with the New York Recorder in the late 19th century. When he left that paper in 1902 to join Hearst’s New York American, later the New York Journal-American, he took the pseudonym and his column with him. One of the more notable Cholly Knickerbockers was Igor Cassini who in the 1940s co-wrote with longtime columnist Liz Smith. For the full history of Cholly Knickerbocker click here.

On page 130 District Attorney Hoffman alludes to a line of poetry from Kipling in an attempt to make a quip about lesbians. He says that “the colonel’s lady and Judy O’Grady” (from Kipling’s “The Ladies” ) are lesbians under their skin making the statement when the murder case involves a woman who dresses as a man in order to meet another woman in secret. The actual line is “sisters under their skins” and was never intended by Kipling to imply sexual attraction between two women. Identifying the Kipling quote led me to a fascinating article by grammar maven and lexicon expert William Safire who wrote an essay about the prevalence of misquoting popular writing. Rosie O’Grady, gilding the lily (see Shakespeare’s King John where it is actually “to paint a lily”) and “into the breach” (rather than the actual “unto”) from Henry V were all cited as the three of the most often incorrectly quoted phrases.

THE AUTHOR:  Robert George Dean (1904-1989) worked as a journalist and drove an ambulance during the war years. In addition to a short three book series featuring "Pat" Thompson and Susan Barton he created Tony Hunter, a private eye who works for the Schmidt Agency. Hunter appeared in ten books between 1938 and 1953. Using the pseudonym "George Griswold" he wrote four espionage/adventure novels with the mysterious Mr. Goode.  I thought maybe one of his books might have been turned into a movie or that he wrote at least one movie script because he's so good at that snappy dialogue you hear in 30s and 40s crime movies. Sadly, his name does not turn up in the Imdb.com listings so the chances of Pat and Susan or Tony turning up on screen are fairly slim.