FFB: Case of the Cold Coquette (a rerun) 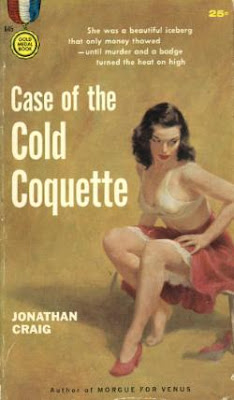 Here's another rerun for you pulled from the back files of Pretty Sinister Books. I read nearly all of the Jonathan Craig police procedurals and wrote them up over a three year period.  The only two not reviewed on this blog are the last two books in the series. Though they were popular posts (one in particular garnering over 1700 hits) I got very few comments on them when I first ran them. This may be in part because -- with the exception of one post -- none of them were featured as part of the Friday's Forgotten Book meme. Enjoy this late summer rerun!

In the opening pages of Case of the Cold Coquette (1957) Eddie Macklin is shoved into the path of an oncoming subway car. His corpse is a mess, the police have to take him away in pieces. The medical examiner jokes, "I could practically do the autopsy right here without lifting a scalpel." Gallows humor is the only way to survive the mean streets of Lower Manhattan. Selby and Rayder examine the contents of Macklin's clothes and find nearly $500 in cash and receipts from a theater ticket agency and an after hours liquor joint that show Macklin to be a man of expensive tastes. Why then is he wearing cheap off-the-rack clothes and unpolished battered shoes?

The two cops learn that Macklin was leading a double life in two separate homes. One residence is a small room in a cheap tenement on West 24th Street where he talked to no one, never had visitors, and played his guitar and sang folk tunes that annoyed his cranky landlady. His other place is a swank midtown apartment near Columbus Circle that he shared with Marcia Kelpert, the "cold coquette" of the title.

Marcia Kelpert is a high priced call girl who specializes in long term commitments to only very rich clients. She's found her latest wealthy lover in Macklin. She provides Selby and Rayder with their first real leads and through her stories they begin to understand the dual life of Eddie Macklin. She mentions Eddie's hatred of Peggy Taylor, a popular jazz singer with whom he attempted to collaborate on a recording of some folk tunes. Eddie was an expert in the origins of American folk tunes, an amateur guitar player and a fairly good singer. But his partnership with Peggy ended after a nasty fight. This bit of info will lead the cops to Taylor and her agent, the equally shady George Sullivan. 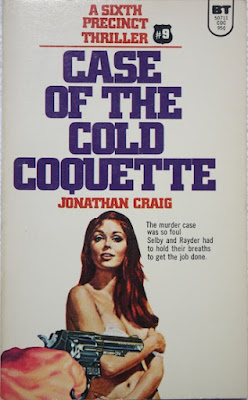 Craig focusses the story on the life of the victim which will become the growing trend in much of crime fiction, especially the police procedural, from the late 1950s to the present. Each interview provides another layer of Macklin's complex life: his multiple addresses, his primary source of income as a bookkeeper, the basically friendless life he led, and his mistrust of nearly everyone. Selby soon realizes that Macklin's source of wealth was related to another of his non-musical interests -- blackmail.

As in The Dead Darling when the story moves to Greenwich Village (the two cops' usual beat) Craig takes advantage of that colorful neighborhood to introduce us to a variety of oddball characters. There is Ace Wimmer, a newspaper seller who fancies himself a secret journalist even to the point of wearing a hat with a fake press card tucked into the band; Mercator, who gets his quirky nickname from his hobby of selling maps of the Village with special locations for secret thrills; Teddy Sheaffer, an ex-vaudeville ventriloquist who haunts the local bars with his dummy plying drinks from tourists and doling out info on Village denizens; and Alice from the Movies, a statuesque prostitute who appeared in some News Reel footage of Times Square that garnered her a lot of attention and provided her with her odd nickname. But one of the strangest characters is Dukey Nardo.

Nardo is a snipe grabber. Provided with a report from the Bureau of Criminal Investigation, Selby discovers that Nardo had been examined at Bellevue where it was revealed that Dukey Nardo derived "sexual gratification from obtaining the unsmoked portion of a cigarette - provided it was being smoked by a young and attractive girl - and finishing it himself." He started out by sitting near a smoking girl and switching cigarettes with her in a shared ashtray and moving up to the daring and extremely creepy job of plucking a cigarette right out of the woman's hand or mouth and running off with it to drag on it ecstatically. Snipe grabber. Don't tell me you can't learn something from reading old mystery novels.

Another thing you will learn is of two unusual medical conditions that affect the circulatory system. Knowledge of these medical conditions provides a huge clue to Selby in recognizing the identity of the murderer. I guess if you've gone to medical school or have an extensive knowledge of diseases you might be able to recognize the killer when first introduced, but don't count on it. The identity of the killer came as a complete surprise to me. This is one of Craig's skills in writing these books. You're wrapped up in the unravelling of Macklin's confusing and fascinating life that you lose sight of the hunt for the killer and things just slip right by. These are not just police procedurals, but cleverly constructed and subtly clued detective novels.
Posted by J F Norris at 1:41 PM