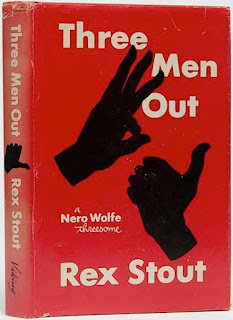 We're saluting Rex Stout today in a web-wide reading of his books for the Friday's Forgotten Book meme hosted by Patti Abbott though most of his books, I think, are hardly forgotten. I chose to continue my reading of the Nero Wolfe canon with Three Men Out (1954). This volume includes three novellas all of which were published under different titles in The American Magazine between September 1952 and December 1953. All of them were subsequently reprinted one or more times in Ellery Queen's Mystery Magazine. As with most of the Nero Wolfe books the US paperbacks were first printed by Bantam and remained in print from the 1950s throughout the 1980s. I liked all of these long short stories for various reasons, but the first one seemed the weakest of the lot.

"Invitation to Murder" was originally published as "Will to Murder". The first title is uttered by Herman Lewent as part of his introductory dialogue. Lewent is both client and victim in the story. As the second (original) title may suggest to a wily Wolfe reader the novella is about a large inheritance, the money and estate that Lewent feels he's been cheated out of. He seeks out Archie and Wolfe to help him find out what happened to his share of his father's estate which was inherited by his sister. She died suspiciously of ptomaine poisoning after eating a plateful of artichoke appetizers at a party and Lewent thinks that someone in her husband's household killed her. Reluctantly, Wolfe takes on the case and Archie is sent to the home of Theodore Huck, the wheelchair bound husband, in a somewhat undercover capacity to smoke out the killer...if in fact there is one. When Lewent dies Archie is tasked with finding a real murderer. He and Wolfe try to prove that Lewent was murdered because of his knowledge of Mrs. Huck's suspicious and conveniently timed death. 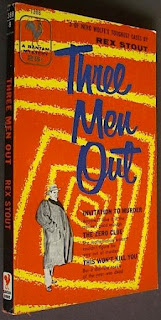 The suspect list is small in this story and therefore the sniffing out of the culprit is not at all difficult. Besides the invalid husband who is the most fleshed out of the characters, there is his nephew Paul Thayre, an aspiring composer of "modern music" and Huck's three female employees: a housekeeper, a secretary, and a nurse. None of these women is really s given any full treatment as a character. They're sort of ciphers. Archie of course is attracted to a few of them, notably Mrs. O'Shea, the buxom, hip swinging, widowed housekeeper who he thinks is Huck's secret paramour. But when Lewent's murder by bludgeoning is examined closely there really can be only one possible killer. The only surprise here is how the body was moved from the actual murder site to where Archie literally stumbled over it. Not much of a mystery tale and though Wolfe solves it with his usually aplomb anyone could figure out this one.

A better mystery and better tale is "The Zero Clue" which resembles the work of Ellery Queen. It's no wonder that the story was reprinted four times in EQMM between 1963 and 1976. The Wolfe novella includes a rather puzzling dying clue, a plot device practically invented by the Queen writing team.

This is also one of the few times we learn that Wolfe had a rival in the private detective business, though this detective is of a most unusual sort. Leo Heller is what one might call a probability detective. As an ex-professor of mathematics Heller made a name for himself by using the laws of probability in determining the outcomes of anything from a horse race to a political election. He then turned to becoming a private detective of sorts using his various calculations and formulae in helping people with everything from completing business deals to locating missing persons. Archie says the rumor has it Heller was so successful that he was pulling a six figure income. Heller crossed paths with Wolfe in one case where they had the same client but Wolfe was fired when the client thought he was moving too slowly. Heller then delivered for the client but he used much of the data and info gathered by Wolfe's operatives which led to Wolfe's negative opinion of Heller as a man of ethics in the private detective world.


Now Heller wants to hire Wolfe to verify his suspicions of a client who may be a criminal. Wolfe is still steamed about the past and his anger is only intensified when Archie tries to get permission to take the case because Wolfe and Theodore are in the midst of dealing with a thrip invasion in the orchid greenhouse. Archie goes to Heller's office anyway and finds him dead with Cramer and other police already investigating. On the desk in Heller's office the police find eight pencils and one eraser arranged to form what appears to be the initials NW. Cramer is convinced that the rivalry between the two got the better of Nero Wolfe and he had Archie take out Heller like a hitman. Wolfe, however, sees through the meaning of the dying clue almost immediately and asks the police to pay close attention to anything involving the number six. 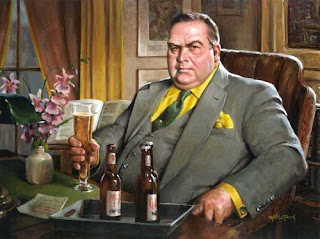 The suspects include all of the prospective clients who were in the waiting room or who had recently paid a visit to Heller's office. Among them are a nurse who wanted Heller to help her uncover the identity of the person who firebombed her hospital; a society dame with a cache of anonymous letters that hint at blackmail; an egotistical inventor with a temper who sought out Heller to provide him with the missing formula to make his latest invention workable; and Karl Busch noted as a man of "NVMS" (no visible means of support) on the police notes Archie spies. Busch seems to be the criminal of the bunch for he wanted Heller's help in winning a horse race. Heller provides him with the name of the horse to bet on but with a name like Zero Busch was too superstitious to accept it as the real winner.


Wolfe listens to all their stories and sees that not only was his first thought about the dying clue wrong, but that Heller's mathematics background is actually the key to the entire case. And armed with some arcane knowledge he gathers from a textbook about the history of mathematics he not only solves Heller's murder but discovers the person who blew up the hospital where Susan Maturo, the nurse, worked. The story is not exactly fair play since it requires that the reader also have that arcane knowledge, but it's nevertheless a superior mystery story with some of the best plotting for a story set in a single room I've read in a long time. This could easily be adapted for the stage and it should be! 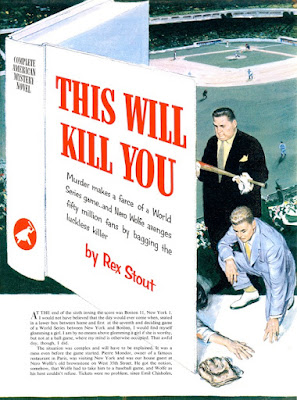 The last story of the bunch "This Won't Kill You" is equally good, but because it deals with baseball I tended to waver in and out of it. In fact, I skipped entire pages at the start of the story that described the baseball game that Archie, Wolfe and a visiting chef from Paris are attending. There are some funny moments with Wolfe indignant about the chairs in the stands that obviously will not accommodate his mammoth size. (Wolfe's need to find suitably large furniture to sit in is a running joke in all three stories.) There is all sorts of 1950s name dropping of baseball players that went right over my head, too.

The story is about the drugging of four baseball players on the New York Giants and the murder of a fifth player suspected of drugging them. The large cast of characters includes a showgirl wife who is the object of many a player's roving eyes and who supplies the story with a subplot that goes on a bit too long. The real mystery is so tied up with the game of baseball that for me it didn't mean much. The mystery was well told but sports fans would appreciate it a lot more than someone like me who doesn't give a damn about professional athletics. For me the biggest mystery was the decision of the Viking editors to change the verb in the original title "This Will Kill You" to a negative.

Overall, a good collection with the second and third novellas the best of the trio. But for me "The Zero Clue" is absolutely top notch. It also appears to be the unanimous appraisal for that novella. "The Zero Clue" turns up in the top five (some rank it as #2) of all 39 novellas in numerous "Best of Nero Wolfe" lists all over the internet and in several reference books.
Posted by J F Norris at 11:07 AM