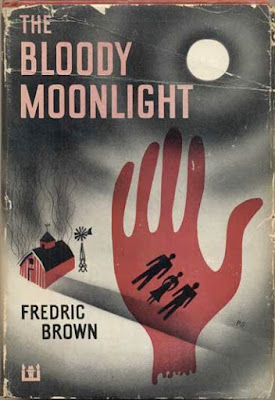 THE STORY: Ex-carny worker Ed Hunter and his Uncle Am are situated in Chicago working for the Ben Starlock Agency as private detectives in their third adventure, The Bloody Moonlight (1948). The case involves an inventor who has created an interstellar radio receiver, a potential female investor who wants to know if the inventor’s claims that he has communicated with Mars are true, and some gruesome murders that may be the work of a werewolf. Now how can you not want to know more?

CHARACTERS: In previous books Ed and Uncle Am were confined to their previous life, so to speak, in the world of travelling carnivals with their sideshows and amusement attractions and the con artists and murderers hiding among the tents and Midway. Having proven themselves as amateur sleuths they now turn professionals and are taking on seemingly routine work until this decidedly bizarre case involving extraterrestrial communication and lycanthropy. Ed is sent from the Chicago offices to travel south to the central Illinois town of Tremont where he meets up with a variety of intriguing characters.

Among them are Stephen Amory, the eccentric inventor who has a secret about his new radio system more eyebrow raising than the rumors that he’s listening in on Martians. There is also Justine Haberman, who as Ed and Uncle Am’s rich client has a smaller role than I anticipated but also raises the sexual innuendo bar several notches high in her scenes with Ed. She is so taken with Ed she loans him the use of her Cadillac which makes him all the more noticeable in Tremont. Sheriff Kingman is one of those rural policeman with a short fuse and little tolerance for city slickers. He doesn’t like Ed much and isn’t afraid to express his dislike violently. And then there’s Mollie Kingman who also sets off Ed’s libido in a dangerous way. She has a secret too that shouldn’t have been such a surprise to me, but darn it if Brown didn’t succeed in fooling me. 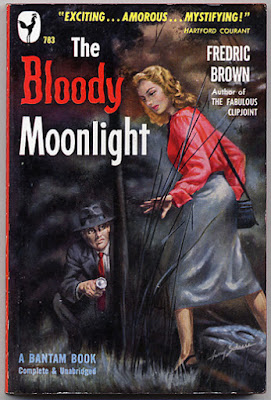 Caroline Bemiss, editor of the Tremont Advocate, is unquestionably the most intriguing and lively of the bunch. She is also a former carny worker and when she learns that Ed Hunter (a plain name) is the nephew of the very same Am Hunter she worked with many moons ago they become instant friends. She has a maternal quality that is very likeable and her rapport with Ed enlivens the book each time they have scenes together.

Ed and Caroline spend many hours together sorting through the oddities of the murder of a man whose seems to have been attacked and killed by a wild beast and whose body then disappeared. When Ed is fingered by the irate Sheriff Kingman as Suspect #1 and throws him in jail Caroline bails him out. She then does her best to keep Ed out of jail while also entrusting him to provide her with inside dope on the murder case so she can finally scoop the Chicago newspapers with headline news.

INNOVATIONS: It's easy to see that the story is an innovative blending of science fiction, horror and detective novel plot devices. Brown spent equal time as a crime writer and science fiction writer back in his days as a fictioneer for numerous pulp magazines. His interest in genuine science fiction (as opposed to the kind of SF-Fantasy that filled the pages of pulps) shows in his detailed descriptions of the physics of radio wave propagation, the history of radio transmission, radio wave discoveries, and his knowledge about possibility of life on other planets and their satellites. Of course, this is all science circa the late 1940s and some of it has been disproved, but to readers of this era it must’ve seemed fairly sophisticated stuff in a mystery novel. 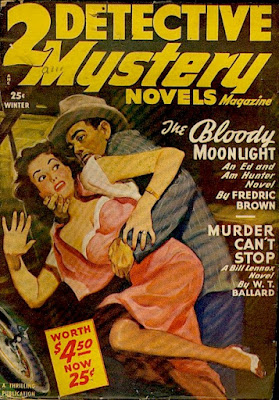 This is one of the few detective novels I have read where lycanthropy is treated as a mental illness rather than relying on the usual mythology and legends found in werewolf movies that treat the phenomenon as real. We also learn of the African leopard men who exploited legends of were-leopards to commit ritual revenge murders against rival tribesmen. Apart from Guy Endore’s groundbreaking novel The Werewolf of Paris (1933) there are very few mystery or detective novels that incorporate this rare mental illness in a story of possible werewolf activity. Brown does a good job of wavering between monster lore and abnormal psychology in dealing with the reasons of who or what is killing the men in Tremont. Ultimately, the solution for the bizarre murders is a bit of a letdown but not without one subtle twist. Not until Leslie Whitten wrote Moon of the Wolf (1967) almost twenty years later do we see a truly modern approach to similar ideas explored here. 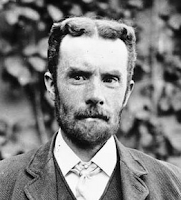 THINGS I LEARNED: Oliver Heaviside was a self-taught physicist and electrical engineer who in 1902 first theorized about a layer in the atmosphere that reflects radio waves and allows them to travel beyond the horizon. At the same time another physicist in a different part of the world Arthur Kennelly was developing his own theory about radio wave propagation. For decades this atmospheric layer was known as the Kennelly-Heaviside layer. Today it’s known as the E layer of the ionosphere. The Heaviside layer is mentioned early in The Bloody Moonlight when Ed Hunter is talking about Amory’s invention and how it could receive transmissions from outside the Earth’s atmosphere. 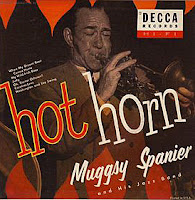 Francis "Muggsy" Spanier (1901-1967) was a Chicago cornet player and jazz bandleader I had never heard even though back in my college days I was an ardent fan of swing and big band music. But this ignorance of mine is easily explained because he’s not truly from the swing era. Spanier made his name in the 1920s through the late 1930s prior to the big band era. He was the leading horn player in the Chicago “hot jazz” scene for years until Bix Biederbecke came along overshadowing all that Spanier had accomplished. In the novel, Ed is a jazz enthusiast and asks to hear a Spanier record when he first visits Justine Haberman who happens to have a large collection of jazz albums and a very expensive record player leading us to...

The Capehart Phonograph! This was considered a top-of-the-line record player during the 1930s and 1940s primarily for its ingenious record changing device. It was a real luxury item and cost a pretty penny.  The Capehart had innovative state of the art manufacturing as well as high end cabinetry that made it a combination record player and furniture showpiece. The record changer flipped the record so that the album could play with little interruption from A side to B side or vice versa. The Capehart was so desirable, yet so outrageously priced, that it soon became a symbol of wealth and sophistication in popular culture. There are two websites (here and here) devoted to the Capehart Deluxe phonograph.  The second website includes some impressive pictures of various models. The photos of the Capehart 400 models -- priced between $1000 and $1700 in the 1930s-- are my favorites.  Justine Haberman apparently had some money to throw around!

EASY TO FIND? There are several copies of the original Bantam paperback in the used book market. Hardcover editions, either the US or the UK, tend to be more expensive and those with DJs are priced in the collectible market since Brown has always been a collectible author. A little over ten years ago an indie press released an omnibus of the first four Ed & Am Hunter detective novels called Hunter and the Hunted (Stewart Masters Pub Ltd, 2002) and new copies of that mammoth hardcover reprint can still be found via the leading online book retailer. That same retailer offers eBook editions of all of Brown’s mystery novels but only in Kindle format (obviously). In any case it should be fairly easy to find a copy of this book whether you prefer print or digital.
Posted by J F Norris at 12:00 AM