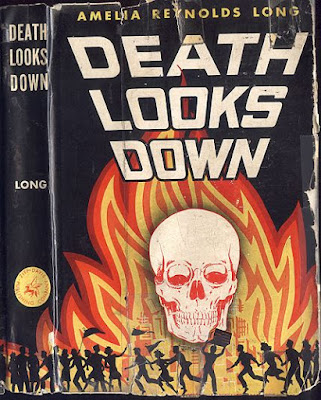 For some reason I keep stumbling across academic mysteries ever since that Tuesday Night Blogger salute back in June. Death Looks Down (1944) is another mystery set on a college campus and one of the more gruesome mystery novels I've read this year. With a high body count and some very nasty ways for some unfortunate characters to shuffle off this mortal coil it makes for some flesh creeping reading. A familiarity with the work of Edgar Allan Poe will prepare the reader for the onslaught of a variety of weird murders and hiding of dead bodies found in its pages.

I wasn't expecting this to be as good as it turned out. After all, Amelia Reynolds Long has a reputation for being one of the many authors consigned to that dubious hall of fame known as "Alternative Mystery Writers." I've written about one of her loonier books (The Leprechaun Murders) and have read five others. All of them show a talent for bizarre plotting told in an unfortunate writing style dominated by improper word choices, poor grammar, surreal metaphors and lapses in logic. Much to my surprise Death Looks Down is not only almost completely free of those writing faults the plot, although very weird, all works out rather well. That this book was published by Ziff-Davis, a publisher with a smart editorial staff, might have something to do with the final product. Her previous publishing house, Phoenix Press, was not known for editing at all let alone publishing writers who had a command of English or the use of logic in creating plots. Death Looks Down also succeeds because Long focuses on her two areas of expertise: literature and academia.

Katherine "Peter" Piper, Long's mystery writer/sleuth, has decided to pursue a master's degree and has enrolled in University of Philadelphia's English literature graduate program. Along with six others she is currently taking a seminar on the works of Poe. Discovery of a manuscript of Poe's morbid elegy "Ulalume" in his own handwriting and its subsequent theft and later disappearance sets off a wild tale of greed, collecting mania, and murder.

The characters are completely involved in the multiple crimes and trying to prevent anyone else from dying at the hands of a mad murderer who finds inspiration for his killing spree in the pages of Poe's grotesque tales. Though published in 1944 we get no inkling of the time period other than it is definitely not modern. Reynolds has an ultra-conservative worldview and finds it necessary to express this through her characters. The only aspect of the book that resembles anything remotely 40ish is that everyone is obsessed with social niceties and etiquette. From coarse Sgt. Boone, an average guy cop whose speech is riddled with slang, to the prim and proper Miss Kutz who dresses and talks like a little girl, every character is always making some aside about proper behavior. It's as if each character is channeling Miss Manners.

Sgt. Boone to a suspect: "Do you generally walk into people's rooms when they ain't home, Mr. Phillips?"

Ginnie Pat in the college dining hall to her two table mates: "May I be excused?" [Seriously? Graduate students?  In a dining hall? Help me.]

He paused to reach for his pipe; then, remembering that he was in the library where smoking was forbidden, he regretfully put it back again.


The last sentence shows you how Long has tendency to overstate the obvious. But she just needed to remind us that everyone was sitting in the library where, for Long, etiquette is paramount. I'll spare you all the stuff in the beginning of the novel when the first victim is discovered in the stacks and how incongruous a murder investigation can be in a library "where there are rules." Maybe it was meant to be amusing, but it comes off as schoolmarmish.

The book is pure puzzle with 99% of the story devoted to solving the crimes. There is no attempt to develop character relationships or give us deep insights into their lives, make any type of social commentary (other than the etiquette nonsense), or remind the reader that the story takes place during wartime. That's fine with me because the story is engrossing enough with multiple puzzles to keep you turning the pages. At two key moments Long actually manages to create a chilling atmosphere worthy of her inspirational source. The section inspired by the obscure Poe tale "Metzengerstein" includes one of her best written horror sequences. It both repels and fascinates in its depiction of college kids gone wild with hedonism in their pursuit of grotesque amusements. The illustration on the first edition dust jacket will give you a hint as to what is involved. There is also an unconscious nod to Christianna Brand's style of detective novel in that several of the characters takes turns in proposing solutions to the mystery. By the end of the book four separate and plausible solutions have been worked out, in part or in total. Some feat for Amelia Reynolds Long who usually has difficulty in turning out one coherent solution to her murder mysteries!

One thing I wish she hadn't done was to divide the book in sections with each named after a Poe tale. This spoils what could have been several gory surprises when the victims were discovered. Instead, as the reader approaches each new section he already knows what to expect, especially since three of the five sections are inspired by very well known Poe stories.

THINGS I LEARNED: There was a lot about the publication history of Poe's writing, his work as a editor at two magazines, and a passing reference to Griswold. And that last bit I had to look up.

Rufus Griswold started out as one of Poe's supporters when he published his poetry in the groundbreaking anthology Poets & Poetry of America (1842). But their tacit business friendship turned ugly when Poe reviewed the final book. In his thoroughly critical essay of the anthology Poe targeted the unbalanced editorial focus. Griswold obviously favored some poets over others. One poet, for example, had over forty poems included while in Poe's opinion other poets received little to no attention. The absence of some of the best writers of the day was also pointed out. Griswold never forgot that critical essay and he became Poe's rival for the rest of his life. When Poe died Griswold wrote an unflattering obituary hardly eulogizing the man instead leaning heavily on character assassination. To this day what Griswold wrote, much of it lies according to Poe's friends and relatives, is the portrait most people have of Poe when they think of him: morose, alcoholic, drug addicted, temperamental, anti-social, and friendless.

The real detective of Death Looks Down, the character who presents the final and true solution, is Edward Trelawney, an investigator for the Philadelphia DA's office who is of Irish descent. He speaks Gaelic and tends to launch into his native tongue when he's angry. There is one instance when an Irish word appears in the story. I'd never heard or read it: spalpeen - Irish slang for a rascal.

This is my first review for a book published in 1944 for Rich Westwood's Crime of the Century meme for July. I'll have two more to entice you before this month is over.
Posted by J F Norris at 9:43 AM