THE STORY: Caroline Watts has mixed feelings about her new position as the physical education teacher at Abbey School for girls. The previous games mistress died suddenly, some say she dropped dead of fright. But it is the school's matron who unsettles her even more. An odious woman, supercilious and scoffing, puffing away on noxious cigarettes the matron claims to be able to communicate with the dead via her "third eye" as well as a spirit who acts as her guide into the realm of the afterlife. Caroline is very wary of Miss Yaxley-Moore, the matron, who seems to be manipulating the headmistress Mrs. Nash while simultaneously draining her bank account. When a young girl who suffers from chronic asthma succumbs to pneumonia and is left to Miss Yaxley-Moore's charge Caroline becomes ever vigilant worried that the matron may do the girl harm. Caroline soon finds herself trapped in a web of treachery and attempted murder.

THE CHARACTERS: There may be few monstrous women to compare with Maude Yaxley-Moore in crime fiction history. There is no better summation of The Third Eye (1937) than The Saturday Review's pithy phrase "hard to excel as a study in malevolence, fear and lurking terror". Yaxley-Moore is a mixture of all-consuming egomania, bitter jealousy, superiority, and subtle tinges of self-loathing. Such a conglomeration of unattractive qualities in one character is unmatched in most crime novels of this era. As a movie fanatic at matinee western might be rooting for the guys in the white hats and waiting for the bad guys to finally get their comeuppance any reader devouring the pages of The Third Eye cannot help but wish for a vile demise for this truly dreadful woman.

Yaxley-Moore is a stark contrast to young Caroline. Though she naively finds herself bonding quickly with strangers, Caroline is far from stupid and not wholly virtuous either. She does have an unlucky habit of placing her trust in the wrong people and realizing it too late. The novel takes on a Perils of Pauline aspect in the very suspenseful middle section where Caroline is trying to return to Abbey School via a bus armed with some evidence that proves Miss Yaxley-Moore was responsible for a student's death through negligence.

There is also Miss Bat of Bat House, Yaxley-Moore's half sister. Equally selfish and patronizing this elderly lady hides an even darker personality beneath her veneer of Victorian sophistication. They share a mutual antipathy for one another, politely tolerate each other's company and eccentricities and will do anything to spare shame and disgrace falling on the family name. They join forces against poor Caroline plotting and scheming like a couple of ancient Borgias.

ATMOSPHERE:  This is an extremely well done contemporary Gothic novel. White has a thorough understanding of how landscape, weather and houses all add to an oppressive atmosphere. One passage in particular caught my attention and perfectly encapsulates how Yaxley-Moore's personality infects everything and everywhere she goes:


The air grew cloudy with smoke--while the mental atmosphere was charged with the poison-gas of hatred. Had they been articulate, the gracious walls might have panted for the open windows and invigoration of youth, in a whisper of crumbling plaster and creaking wood.

Caroline herself finds herself pleading for youth and vigor when she is beset by troubles and mishaps after trusting only older women. In the chapter entitled "The Village of Old Women" late in the book she chants to herself "Please be a young beautiful woman" as she rings the doorbell of a house of a stranger who she hopes will help her find her way back to the bus. "Please let her be young. Anything but an old woman!" And who answers the door, do you think?

INNOVATIONS: The narrative is told from multiple viewpoints creating suspense and using dramatic irony to heighten the tension. The reader knows of the plotting against Caroline but also of Caroline's plans. Yet White still holds a few surprises in check for the final pages so that all the villainy is indeed thwarted. That we get to know the inner thoughts of both our intrepid heroine and her two villainous antagonists makes the reading enriching, engaging and unnerving all at once. While this really cannot be considered a crime novel in the true sense there are acts of amorality and anti-social behavior that make several of the characters (including a handful of minor players on the coach bus) appear to be the worst kinds of sociopaths. The introduction of a paranoia and mistrustfulness on Caroline's part is well served. Each act of kindness seems tainted with self-serving evil. No one on the bus can be trusted. Which person is an emissary of Miss Yaxley-Moore? The woman dressed in brown? The aristocrat in furs? The androgynous creature who looks like a man in woman's clothes? Or all they all part of a plot to keep Caroline from reaching the school? It's remarkably well done and told literately and often movingly. 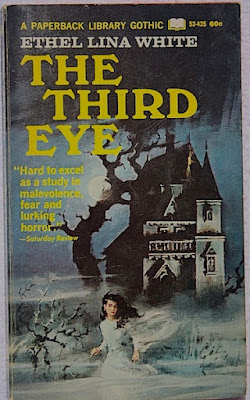 The relationship between Caroline and the misfit student Flora Baumgarten is mixed with pathos and absurdity. Ultimately, the novel is about neglect not just from Yaxley-Moore but from Caroline as well. She learns that her attempts to be kind fell short. She regrets that she often joined in the cruelty of the girls and staff toward the sad overweight girl with respiratory problems. Caroline finds herself contemplating "the pitiful tragedy of frustration" while on the bus and is determined to make good on her own failures as a teacher and friend to Flora. This may be the most rewarding section of the book.

EASY TO FIND? The Third Eye has been reprinted by the independent UK press Greyladies and can be purchased directly from their website. A handful of used copies of both the 1940s and 1960s paperback reprints seem to be easy to find and are all affordable. Take your pick -- new or old. Probably the best edition will be the newest one from Greyladies. But act now since this press only prints a limited number and when they're all sold they don't put out another edition. Either way, you'll find this unusual suspense novel to be a rewarding read on so many levels.
Posted by J F Norris at 12:29 AM