In honor of April Fool's Day here's a very silly entry in the subgenre of comic crime -- Skuldoggery (1967) by Fletcher Flora. 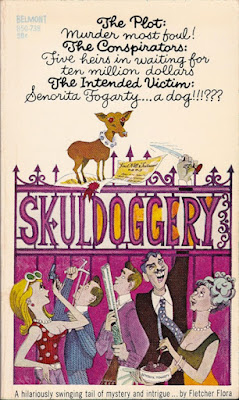 THE STORY: When the Jarbelo family gathers for the reading of Hunter Jarbelo's will hoping to hear how each are to inherit a share of his ten million dollar estate they are in for a rude awakening. He has included a proviso that the entire estate is to go toward the care and well being of his Chihuahua -- Senorita Fogarty -- as long as she remains alive. Together the family conspire to cut short the life of the dog but not without considerable effort.

THE CHARACTERS: Like all good farces of this type nearly everyone is greedy and/or stupid. Few of the family members come off as anything resembling a real person or an intelligent human being. That's quite all right though, for the entire book is written in a very strange imitation of an Evelyn Waugh satire. Unlike Flora's usual writing style he adopted for his fast paced paperback originals in the James Cain vein or his lesbian "erotica" he wrote for the sleaze publishers this book has a patronizing tone emphasizing the Jarbelo family's flaws in the progression of their many failed attempts to eliminate the fated Chihuahua.

Only Hester -- twin sister to Lester and daughter of Flo, Hunter's elder daughter -- is presented as anyone with a modicum of cunning, charm and expediency. The rest are drunks, louts, layabouts and generally perfect cartoons of the idle rich. Standing in their way to the Jarbelo fortune are the Crumps, Hunter's faithful servants, whom he appoints as Senorita Fogarty's guardians and keepers of the estate. Just getting into the house to talk to one of these servants is a job in itself as the Crumps know only too well that the others intend to do the dog major harm. They take their job as guardians very seriously. But could they also be as self-interested as the heirs? The temptation to use the money not only for the Chihuahua but for themselves is oh so hard to resist.

When one of the Crumps unexpectedly drops dead under suspicious circumstances the police enter the picture. The scenes between Det.-Lt. Sylvester Bones and the family make for some excellent farcical reading. And I couldn't resist including a large chunk down in the "Quotes" section. 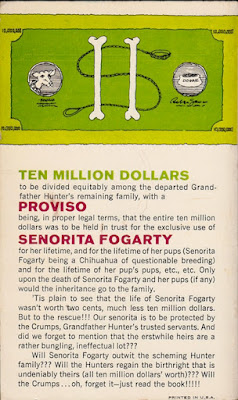 INNOVATIONS: It's the odd narrative voice that Flora adopts for this book that really makes it stand out from his other better known crime fiction. that and it seems to be the only all out comedy he wrote in novel length. Hard to believe that the story is set in the US with passages like this:

"Hester, on the other hand, had in the meanwhile been busy. Her business had begun, in fact, the previous afternoon immediately after leaving Flo and Uncle Homer and Lester, and it had been in the beginning a kind of preliminary session of furious thinking. It was apparent that someone had to assume the initiative in the matter of nudging Senorita Fogarty into dog heaven, and it was equally apparent that Lester was not the one to do it. Indeed, Lester had proved himself incredibly incompetent at every turn, and it was impossible to believe that he would suddenly improve."


MORE QUOTES: There are a lot of passages I'd love to quote at length. I'll settle for a half page snippet of my favorite scene in the book: 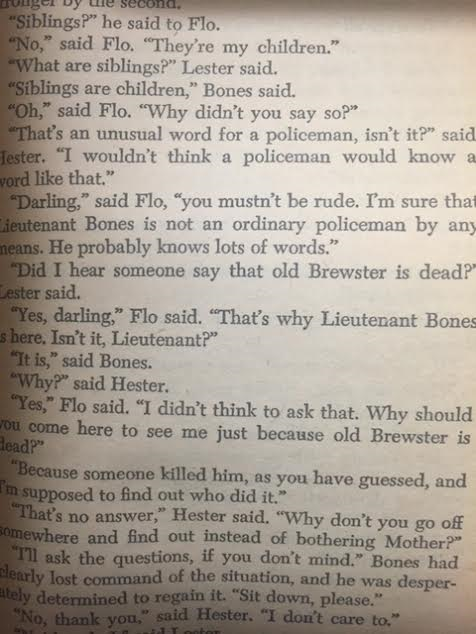 I had a blast reading this one. I ended up reading passages aloud to Joe and we cracked ourselves up. If you're a fan of silly farce, clever wordplay, and comic crime populated with the basest and most venal characters, then Skuldoggery is right up your alley. It's not exactly uproarious or hysterically funny but it ought to raise more than a few smiles and inspire a couple of good chuckles. And it's certainly very different from anything else Fletcher Flora ever wrote.
Posted by J F Norris at 9:05 AM