She Let Him Continue - Stephen Geller 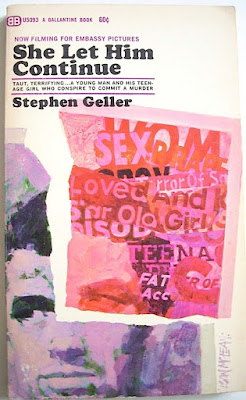 I’ve not read any JD pulp fiction, but I’m pretty sure that She Let Him Continue (1966) is a reaction to a subgenre of popular fiction that flooded the drugstore paperback racks during the 1950s and 1960s. There are no leather jacketed, motorcycle riding, juvenile delinquents in Stephen Geller’s novel but the rebellious youth attitude, the beat poet prose and the disregard for all adult authority are present in this high octane, reinvented version of a JD pulp novel.

She Let Him Continue is narrated by 22 year-old ex-convict Dennis Pitt who imagines himself to be a CIA operative. He works in a chemical factory in the aptly named New England town of Gravemoor where nearly everyone he meets is half dead or so bored with life any sort of diversion will entertain them. Take for instance Dennis’ quasi landlady Mrs. Bronson who along with her husband runs the motel where Dennis lives. When not discussing with Dennis the sensationalized crime stories of rape, child murder, and kidnapping in the local tabloid she’s showing an unusual interest in Dennis himself. Or is her Mrs. Robinson-like seductive posing only part of Dennis’ elaborately constructed delusions? Dennis spurns the attentions of Mrs. Bronson and focusses instead on recruiting 17 year-old Sue Ann Stepanek as comrade in his covert missions. And true to this JD pulp Sue Anne is more trouble than Dennis can handle.

Stephen Geller writes the book in a sort of hipster Beat Lit style shunning chapter divisions and the use of quotation marks in all the dialogue. The result is like reading the transcript of an uninterrupted drug induced hallucination. Pill popping is one of Dennis' hobbies along with his baroque fantasy life and he and Sue Anne freely take drugs as they turn into thrill-seeking daring adventurers as part of Dennis’ strange plan to sabotage the chemical plant. Dennis is fully aware of his pretense as a CIA agent and lets us in on that big lie fairly soon. But we believe along with him that Sue Ann is just a naïve teenage girl he’s exploiting for companionship and eventually sex. 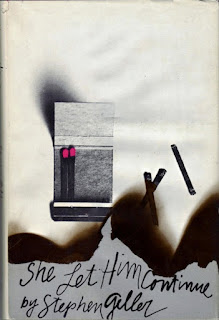 As this hallucinatory journey continues each of Dennis’ encounters with the mostly ineffectual adult characters reveal a frustrated troubled young man orphaned at an early age, corralled into his aunt's house, bullied by teenage girls, abandoned by peers, and eventually turning to arson as his ultimate rage-filled teenage response. Upon release from prison he is badgered by his exacting parole officer and harrassed by his boss at the factory. He is coping with indifference and lack of empathy on a grand scale which he collectively labels “the pressure.” The chemical plant is a symbol of all that is corrupt in the world as Dennis watches it pour out filthy sewage, sinister “red dye” and stinking pollution into Gravemoor’s river. Blowing up the sewage chutes is an act of revenge on the world that turned its back on him, led him to commit a selfish crime and robbed him of five years of his adolescence in prison. We begin to feel an odd empathy for the young man as he dreamily riffs on "the pressure", the polluted river and everything promised to him that was spoiled or taken from him.

With Sue Ann as his sergeant he plans to battle the world. Under Dennis’ mentorship Sue Ann is given a test to prove her worthiness as a CIA agent. She surrenders to Dennis’ will and with the help of some pills to loosen her inhibitions we watch her unleash her inner demons in a violent climax. All too quickly we realize Sue Ann was not at all the naïve waif she was first presented as. The pills are not to blame. It’s clear that she and Dennis have a lot more in common than misfit sexual attraction. And Sue Ann actually turns out to be much more dangerous than the fantasy plagued Dennis. 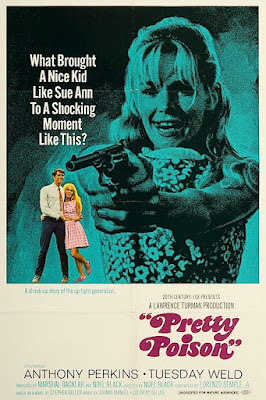 Geller’s novel served as the inspiration for two movies. The first retitled Pretty Poison (1968) is something of a cult sensation among exploitation and psycho-thriller fans. Unsurprisingly, Anthony Perkins plays Dennis though he was three years shy of his fortieth birthday when he made the movie. Tuesday Weld is Sue Ann whose part is substantially rewritten to hint at a vixen in training just as aware of her capacity to corrupt as Dennis is aware of his CIA fantasy world. I’m not so sure I like this change but Weld carries it off with a sinister subtlety ultimately exploding into a kind of bloodthirsty teenage version of Bonnie Parker that another immature or less intelligent actress might overplay into a tired caricature.

The movie was remade for TV in a boring revamp updated to 1996. Grant Show, best known as one of the bland hunks on "Melrose Place", plays Dennis with an unattractive boyish haircut and as Sue Ann we get the uninspired Wendy Benson who went on to play supporting roles in a string of forgettable TV series throughout the 1990s and early 2000s. Much of the TV movie is just a copy of the far more interesting original. The changes in storyline like Dennis’ aggressive sexual nature don’t add to a better understanding of what Geller was really after in his portraits of two furious young people of the 1960s. As acted by Show and Benson we get vapidness personified not deeply troubled frustrated souls caught in a world they want desperately to control but cannot.

More on the first Pretty Poison movie coming in a post in a few days.
Posted by J F Norris at 9:54 AM