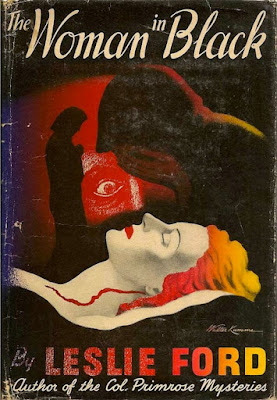 THE STORY: Grace Latham is invited to a Washington dinner hosted by Dorothy and Theodore Hallet. Theodore is grooming his employer Enoch B. Stubblefield, a millionaire industrialist, for candidacy for President. At the dinner is young Susan Kent who just the night before had approached Grace for help in a predicament. She has been unwisely accepting money as a "subsidy" for her husband's chemical research into synthetic rubber after she gave two influential businessmen some of her husband's papers meant to be destroyed. Among other guests at the dinner party is Mrs. Lawrence Taylor, the mysterious woman in black of the title. She has been stalking Stubblefield and harassing him for a wrong done to her in the past. The next day Mrs. Taylor is found murdered in a boarding house. More death follows as secrets are revealed, Susan Kent's compromising of her husband's research looms large over the story, and misguided good intentions turn very deadly.

THE CHARACTERS: Grace Latham is on her own in The Woman in Black (1947). I believe it is her only solo adventure. Colonel Primrose, her usual cohort in crime solving, is recuperating from the measles. Sergeant Buck, however, is there as Grace's substitute Watson, doling out advice and keeping her posted on the Colonel's recovery. The supporting cast of suspects and victims is a lively lot ranging from Milton Minor, an arrogant writer working on Stubblefield's biography; Dorothy Hallet, the epitome of a Washington society hostess; Freddie Mollinson, an ugly depiction of a vicious old queen who plies his trade in gossip and rumor; Susan Kent who at first seems like a vapid wife with no sense at all, but in the end proves to be a sympathetic portrait of a woman who loves not too wisely but too well; and Stubblefield himself. He's an interesting depiction of a megalomaniac businessman with his eyes on everyone's prize and whose charm and unflappable persona are a façade for ruthless ambition and self-interest. I couldn't help but draw comparisons between Stubblefield and a certain member of the current US Presidential candidate race. I wonder if Ford based him on some prominent industrialist of the post WW2 era. The complications involving Susan's indiscreet handling of her husband's not so well guarded research into synthetic rubber polymers, the politics of a pre-presidential campaign, and the more familiar subplot of Mrs. Taylor, her daughter and their ruined life that Stubblefield was responsible for all blend into a fine mystery novel with some very good detection. 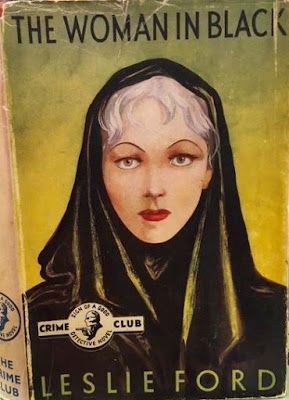 INFLUENCE & INNOVATION: The story for me was unexpectedly engaging for its depiction of the Washington social scene. It's also a good example of how Ford's style and choice of subject matter influenced Ellen Hart Smith who wrote under the pseudonym Louisa Revell, a writer I've just discovered and have been writing about on this blog. Julia Tyler, Smith's character, is almost a clone of Grace Latham (albeit a much older Grace) in attitude, speech, and narrative voice. This is only the second Ford novel I've read and it vastly differs in tone and treatment from The Clue of the Judas Tree, the first book of hers I read. That other book, a very early non-series mystery, resembles more of a woman in peril mystery along the lines of Mignon Eberhart. Apparently the early Ford mystery novels are more in line with the HIBK subgenre. Not so in the case of this well done, smart and humanistic detective novel.

There is some business with a gun disappearing and reappearing that reminded me of the literal gunplay in the Perry Mason novels. No real knowledge of ballistics or guns is needed as in Gardner's books. But it got to be a bit ridiculous with finding the gun, hiding the gun, retrieving the gun, and trying to get rid of it by dumping it on other suspects. 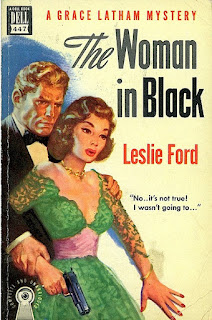 QUOTES: This book often had a wicked sense of humor.

"I could imagine what Dorothy must have been feeling just then, as I can imagine how an architect must feel standing by while somebody picks up the foundation of a house he's built and gives the whole thing a heave-ho into the open sea."

"...the advice I was trying to give him didn't have the chance of the proverbial snowball on the steps of Capitol Hill..."

Mrs. Stubblefield (an occultist and astrology nut): "Your aura was a lovely blue last night. Now it's yellow."
Grace: "That's the jaundiced view of life I'm taking at the moment."

EASY TO FIND? Yes, indeed if you like hunting the world of used books. No modern reprints or reissues exist. Thanks to her unfortunate and ill-deserved reputation for being un-PC Leslie Ford will probably never be reprinted unless a real smart and courageous indie press decides to revive her. And I think she should be. There are multiple paperback editions (I counted four) as well as three hardcover editions of this particular title. Prices range from $2 for a reading copy of the later Dell paperback to $40 for a US 1st edition with a dust jacket. All very reasonable prices, I'd say and some are outright steals. I love the dust jacket for the UK edition! I may just buy that copy myself.

This was such a nice surprise after all I've read about Ford and her supposedly snobbish view of life in Washington and all the nonsense of her being racist. True she can't resist having Lilac, Grace's smart as a whip housekeeper talk in that insulting Butterfly McQueen dialect, but there is nothing at all racist about Ford's worldview. Snobby sophistication as well as outrageous hubris goes hand in hand with the Washington elite now as much as it did then. That hasn't changed at all. But her treatment of the middle class and working class characters, in this book at least, comes off more fair minded and compassionate than how she feels about the arrogant and ambitious characters of Washington's upper strata. Milton, Freddie and Stubblefield are actually more villainous to Ford than the murderer! And for me Lilac is a breath of fresh air and a force of common sense in this book - despite her poor grammar.
Posted by J F Norris at 10:24 AM