FFB: This Is the House - Shelley Smith 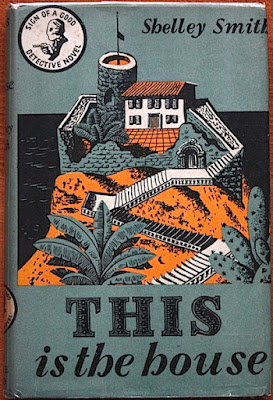 THE STORY: This Is the House (1945) is a Caribbean homage to the British claustrophobic village murder mystery. The Jacques family lives in a converted Portuguese fortress on Apostle Island not far from Haiti and they are dropping like flies under mysterious or violent circumstances. Voodoo, smuggling and espionage also figure.

THE CHARACTERS: Julia Jacques is the sad matriarch of the family who in the opening chapter is in the end stages of a terminal illness that has left her paralyzed and bedridden. Unable to speak or barely move a muscle she withers away under the care of a solicitous nurse, her supercilious sister Hattie, and her aloof husband.  She dies mysteriously by suffocation that may have been the result of a cat falling asleep on her face. Quentin Seal, a detective novelist and casual acquaintance of the family, is troubled by the coroner’s dismissal of death by misadventure and ponders whether Julia was somehow cleverly murdered. Then another member of the family dies and this time there is no question that murder was done. Quentin is approached by M. Jacques and goaded into using his skills in creating and solving fictional murders to help the family avenge the deaths. Prudence Whitaker, secretary to Hattie Brown, acts as Seal’s sometime sleuthing cohort. A vagrant beach bum named Boris Borodin makes a cameo appearance and will figure into an intriguing subplot that will eventually tie all the criminal activity into a carefully orchestrated scheme years in the making.

Oh, let me not forget the gibbon named Orlando! For a while I thought that there was going to be a nod to Poe with the introduction of Hattie’s exotic pet, but he’s really only present to raise the bar on the surreal elements several notches higher.

A little past the halfway mark Napoleon Orage enters the story as a representative of the Wigtown police force and surprises most of the characters when he turns out to be a native. A black police officer in the Caribbean? Unimaginable! More of Smith’s very welcome satire.

Smith shows off her obvious love of the genre and has created in this early work (her third crime novel) a hodgepodge of detective novel and adventure thriller. She manages to work into her engaging plot several familiar motifs of the traditional detective novel including a quasi locked room puzzle, alibi breaking, a whiff of supernatural in one character’s use of macabre voodoo spells, and an oddball romantic subplot. All the while the story is filled with intriguing incidents, eccentric characters, puzzling murders and one very well hidden murder method. Clues are so artfully placed that even the most assiduous reader will miss most of them resulting in some eyebrow raising surprises in the denouement. True to an old-fashioned whodunit the big reveal takes place in a sitting room with all the surviving suspects listening to Quentin Seal deliver the elegantly presented solution. In a nod to Christianna Brand’s trademark of multiple solutions Seal shows how every single member of the family was capable of committing one or more murders before he and Prudence unmask the real culprit and reveal the unexpected conspiracy.

INNOVATIONS: One lurid murder combines a dollop of illicit sex, a corpse found in a compromising state of undress, and a nightmarishly timed plunge of a paper knife. The investigation reveals that one suspect was witness to the murder but completely oblivious that a murder took place. For that daring touch of sex and a thoroughly horrifying murder This Is the House gets my vote as one of the earliest transgressive detective novels. Smith takes a huge risk in dreaming up a crime of passion that other more polite mystery writers of this era would never dare imagine. It would be forty plus years before a similar murder sequence would ever be considered in fiction again only to lose its power to shock when the concept was cheapened in grotesque overuse in 1980s slasher movies.

One passage foreshadows what will become one of Smith's own trademarks in her crime fiction. Quentin Seal considers then dismisses several suspects in the role of the killer and when he finds he must discount Julia's creepy older sister Hattie he remarks to Napoleon: "You've cleared my mind. [...] She seemed so delightfully suitable for the part, too. It's so right to have a nasty old woman whom everyone dislikes for your murderess rather than your innocent and bashful heroine." Hattie is actually very reminiscent of Luna Rampage and Mrs. Jolly who will appear as Smith's badass biddies in future books.

The title comes from the nursery rhyme “The House that Jack Built.” In the opening pages of the book the cast of characters is listed with each of them matched up to the characters in the rhyme. Some are obvious like M. Jacques for Jack and Father Xavier as the priest, while others are satiric like Hattie cast as the cow and the gossipy bitch Ellen Foley as the cat. The full nursery rhyme is printed as a prologue with Jack being replaced by the family name Jacques. Seems to me this is a nod to Agatha Christie’s penchant for using nursery rhymes as inspiration for plot gimmickry and the book’s title. In fact the whole novel might well be seen as Smith’s homage to Christie for it satirizes the English village mystery and its closed set of suspects by transporting it to a seemingly tropical Eden just as claustrophobic and ridden with secrets and hidden passions. 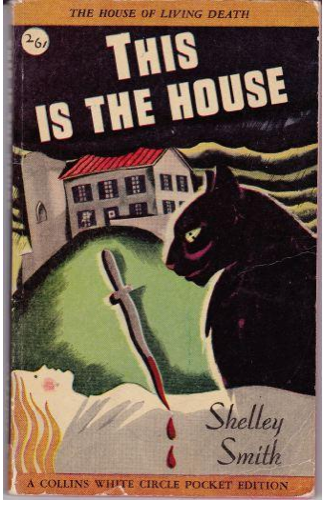 EASY TO FIND? I thought it might be one of Smith's hard to find books since no one has ever written about it on the web until I did. Even Good Reads, a website I tend to avoid, doesn’t include it in her bibliography. (No surprise there, actually.) But a genuine surprise was finding nearly 35 copies waiting to be purchased and read out there in the digital used book market. There may be even more waiting to be discovered in bookshops that have no internet presence. Very good news indeed! It was published only in the UK and Canada and you have a choice between hardcover (Collins Crime Club, two editions) or paperback (Toronto’s White Circle, the Canadian paperback arm of Collins). Prices range from $2 for a paperback reading copy to $25 for a VG+/VG+ copy with a DJ. I say go for a hardcover with DJ even if most of them are the 1948 reprint. I’ve never seen so many affordable copies of a 1940s era mystery novel with DJs in such great condition! Another surprise: In 1964 This Is The House was translated into German and published under the title Das Haus auf der Apostelinsel (literally, The House on Apostle Island).

WANT MORE? I’ve written about Shelley Smith a lot. She’s one of my favorite writers who I think worked best --and perfected-- the malice domestic and “badass biddy” subgenres. Click here to bring up all the Shelley Smith tagged posts over the past five years.
Posted by J F Norris at 6:14 AM