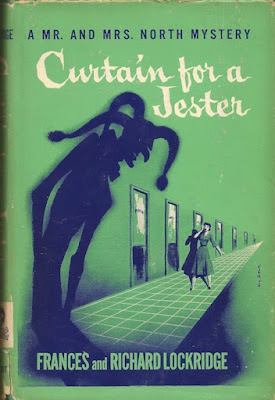 Today I guess might be called April Fool's Eve. Coincidentally, Curtain for a Jester (1953) opens at a party on April Fool's Day.  The host is Byron Wilmot, owner of Novelty Emporium, and an inveterate practical joker. Not the fun kind of joke good for a harmless laugh, but the nasty kind. Wilmot is a prankster of the cruelest, most sadistic type. Most of his guests become victims of one sort of humiliating prank or another at his mean spirited party. Two guests arrive in costumes Wilmot provides for them -- as a witch and a boy in short pants -- only to be embarrassed when they discover they are the only ones in Halloween get-ups. The costumes also reveal how Wilmot perceives their relationship as the woman is an unattractive spinster and her date is a boyishly handsome man four years younger. Wilmot's nephew, a recovering alcoholic, is (not too realistically) goaded into drinking by his uncle and quickly falls off the wagon in a very ugly fashion.

Then there's the shooting prank involving a red haired mannequin and a cap pistol. It's the most disturbing of all the jokes played out that night. Not so much for the toy gun being fired off in rapid succession but for the target. This bothers Pam North more than anyone. She just can't dismiss the image of that weird red hair on the plastic model nor the strange scar on its face. The following morning Wilmot is found stabbed and the mannequin has been thrown out the penthouse window smashed to pieces on the street below. But the red wig is still there clearly making it identifiable as the mannequin seen at Wilmot's party.

And so Pam and Jerry North are embroiled in another strange murder case. The police would like to overlook its puzzling aspects but Pam in her relentless prodding will not let them go ignored. The book might very well be subtitled Or, The Riddle of the Auburn Dummy so prevalent is the repeated talk of this redheaded mannequin. At one point Jerry makes a crack that was for me the only truly funny line in the book: "Or for red hair read red herring."

Of course Jerry is wrong and Pam is right. The dummy, its scar, and the hair all prove to have significance and the shooting prank eventually points to a dark secret in the past of one of the party guests. A subplot involving an FBI investigation into undercover activities at the novelty shop and warehouse is not so interesting and seems thrown in to fill up the pages. Sadly, the mystery of who killed Wilmot and why is not as mysterious as the Lockridges would have us believe. It's all rather obvious even if they manage to put a bit of a twist into the plot.

That I made it all the way through this book is sort of an achievement. I guess what I learned most about reading this is that I really can't stomach Mr. and Mrs. North. The book is filled with loads of ersatz Manhattan sophistication and phony humor lifted from 1950s TV and B movies. They have a trio of cats named after alcoholic beverages (Gin, Sherry, and Martini) two of which have an uncanny knack for sensing the bad guys in the cast. The policemen sport comic Irish names like Aloysius Mullins and Artemus O'Malley. Everyone is always being offered cocktails at all hours of the day and night. Pam spends a lot of time discussing how she likes her martini prepared (with a lemon peel, no olive) and whether or not they live up to her standards. But at least she drinks them with gin and vermouth and not vodka and chocolate liqueur.

Worst of all the climax is meant to be a melodramatic pursuit with eerie overtones but only succeeds in being unintentionally ridiculous. Rather than the intended action sequence lifted from 1950s TV crime show the finale is more reminiscent of a Judy Bolton mystery or -- to flash forward to the 1970s -- a Scooby Doo cartoon. The villain dons a Punch outfit complete with oversized mask that completely encloses the head. The DJ illustration, therefore, is not a metaphorical image but a literal one. It depicts exactly how the disguised killer is described in the final scene as he chases Pam North and the spinster secretary through the warehouse. When caught the killer tries to commit suicide but the knife he's grabbed off a countertop turns out to be a gag knife with a collapsible metal blade. It's all meant to thrill the reader, but it's all sort of pathetic.

And the Lockridges have the most irritating writing style. It's stilted and arch and the sentences tend to be broken up with parenthetical clauses that would be better dispensed with. Here's an example of some of the worthless drivel you have to wade through:

Cue tittering laughter. I'm afraid I was not even smiling. I was scowling.

The rest of that page goes on for another eight paragraphs, mostly made up of brief lines of dialogue, with Pam and Jerry arguing over where the coffee disappeared to and whether or not Jerry should stay for breakfast once they find the coffee. Jerry eventually leaves for work and Pam heads to the grocery store and the breakfast drivel goes on for two more paragraphs starting with this:


"Pamela bought coffee--also oranges, bacon which would turn out to have really been cured and could be returned if not (and which had not, and was not returned), English muffins, a dozen eggs and a jar of red caviar."

"...and a jar of red caviar." For breakfast. There's some of the ersatz 1950s sophistication for you. See that unnecessary and awkwardly written jokey parenthetical comment? There are loads of those. What has any of this to do with the murder of the sadistic practical joker? Absolutely nothing. Who would care about this? This is a perfect example of the lighthearted mystery gone haywire.

I'm afraid I've had my fill of Gerald and Pamela or Pam and Jerry, whichever you prefer. The Lockridges don't seem to know which names they prefer either. Nor do they seem to care about writing a mystery novel that sticks to crime rather than domestic riddles and marital squabbles that would be better left to the world of dreary soap operas.
Posted by J F Norris at 12:59 AM