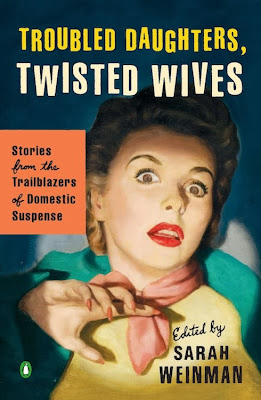 Yes, it's a brand new book and it's my choice for Friday's Forgotten Book. I guess this is a cheat of sorts. Since many of these women writers are utterly forgotten (but not by me -- I've written about many of their novels here) and this review is months overdue (I finished this book back in August) it's time to get it up on the blog.

Sarah Weinman has gathered together an impressive array of woman mystery writers who were instrumental in the development of a subgenre she likes to call domestic suspense. The anthology brings together pioneers in crime fiction like Margaret Millar, Elisabeth Sanxay Holding and Charlotte Armstrong with stalwarts like Patricia Highsmith, Dorothy Salisbury Davis, and Dorothy B. Hughes. Rounding out the group are the modern and all too often forgotten writers like Nedra Tyre and Celia Fremlin, and wonderful new finds like Joyce Harrington and Barbara Callahan. There are a total of fourteen women represented with a variety of stories that run the gamut from creepy and atmospheric to outright nasty. There is even a surprise happy ending delivered in "Everybody Needs a Mink", an atypically lighthearted story from Hughes normally known for her novels of paranoia and dread.

I would’ve liked a better story from Margaret Millar than her oft anthologized "The People Across the Canyon", a story even if you have never read it before will seem very familiar as it recycles an idea used too frequently in crime fiction. The story from Shirley Jackson, a master of both the novel and short story, is unfortunately the weakest and least satisfying in the collection. There has to be a better example from her pen than "Louisa, Please Come Home" which lacked bite and pizazz compared with the quality of the others selected. But the rest of the stories each have something to recommend them. Below are highlights from half the collection.

"A Nice Place to Stay" by Nedra Tyre
Tyre was a regular contributor to Ellery Queen’s Mystery Magazine where she published over forty short stories. In this tale she captures the voice of a loner woman whose only desire is a comfortable life, good food and a nice place to stay. An opportunistic lawyer jumps on her case and turns her into tool to advance his career. But the narrator has a surprise in store for all his hard work.

"Don’t Sit under the Apple Tree" by Helen Nielsen
I am a big fan of Nielsen’s novels and also her TV scripts for shows like Alfred Hitchcock Presents. In this story she takes the old trope of the anonymous phone caller and gives it a Nielsen triple twist. The story is notable for her narrative trick of weaving back and forth between the past and present in order to build suspense.

"Lavender Lady" by Barbara Callahan
An example of the creepy domestic suspense story and very well done. The story tells the origins of a popular folk tune as narrated by a singer/songwriter. Slowly we learn how her muse has affected her creative life. The repetition of the song lyrics are like the chants and doggerel of doom so often found in fairy tales.

"Lost Generation" by Dorothy Salisbury Davis
The most experimental and mature of the lot. As in The Judas Cat and The Clay Hand, both early novels about how violence uncovers the corruption of small town’s population, Davis does in miniature and with an economy of words another story of rural life and crime. The narrative structure is layered with ambiguity and requires assiduous reading to glean all the subtleties. The relationships are revealed through bare bones dialogue and minimal description. It’s almost like a radio drama. Quite an impressive feat, loaded with sharp details and yet it’s the one of the shortest pieces.

"The Heroine" by Patricia Highsmith
As I was reading this one I couldn’t help but think of “The Turn of the Screw” and movies like The Nanny. Another one of those stories about a possibly mentally ill woman left in charge of children. Lucille has an obsessive need to prove herself and suffers from a few delusions. You know something is odd about her but you keep hoping that she isn’t a crazed lunatic. The ending is a shocker.

"Mortmain" by Miriam Allen DeFord
Probably the nastiest story in the collection. Reminiscent of the kind of macabre irony Roald Dahl perfected in his short fiction. DeFord tells the story of a greedy nurse taking care of an ailing deputy sheriff and how her scheme to steal money from his safe goes horribly wrong. Has a gasp inducing ending proving this story to be the only true noir tale in the collection.

For me the gem of the book is "The Purple Shroud" by Joyce Harrington, a writer whose work I knew nothing about until I read this tale. It’s a little masterpiece. Each carefully chosen word rings true. The brilliant use of weaving imagery from the work on the loom to the spider spinning its web, the language used to evoke the serenity of Mrs. Moon’s state of mind as she plots revenge on her womanizing husband –- it’s all perfect. Here is the epitome of what Weinman talks about in her informative introduction defining the aspects of domestic suspense. If I were you I’d save it for the very last and savor it like a fine wine. It’s really that good.
Posted by J F Norris at 11:30 PM