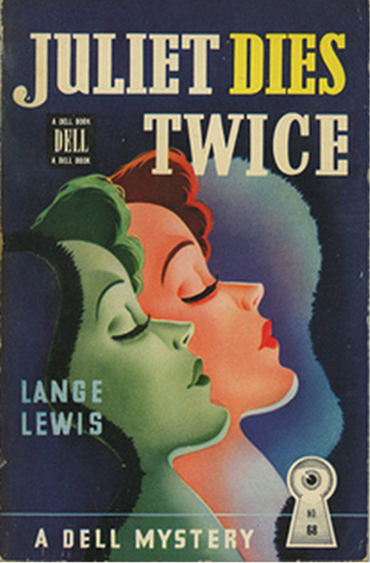 I had such hopes for Juliet Dies Twice (1943), Lange Lewis' second detective novel after having so enjoyed her debut Murder Among Friends. But when I encountered three bugaboos of mystery fiction I thought "Uh oh" and the red flags went off for a trip into the land of cliche and run-of-the-mill plotting. It looked like Juliet Dies Twice was going to be a sophomore slump of a novel. And those three bugaboos? An escaped lunatic, an amateur theatrical company, and a trunkful of Freudian psychological "insight".

The amateur theater business is tolerable for its lack of verisimilitude because Lewis has circumvented the actual structure and process of a theater by making this company a combination student/faculty group on the campus of small university. The building itself is unusual even for an academic theater and it allows the writer to create some unheard of and cumbersome rules like the fact that a prop room is located in a basement far away from the stage and is accessible only by two doors (one inside and the other leading outside the building). The key to the inside door is in the hands of a secretary in a different building and must be asked for in order to access. That's right the theater department doesn't even have control over a key to their prop room. You get the idea how convoluted and contrived the plot is with that business alone. Add to that an escaped lunatic, the abundance of Freud love and completely outdated views of mental illness and it's enough to drive anyone to the analyst's couch screaming for a healthy dose of common sense. 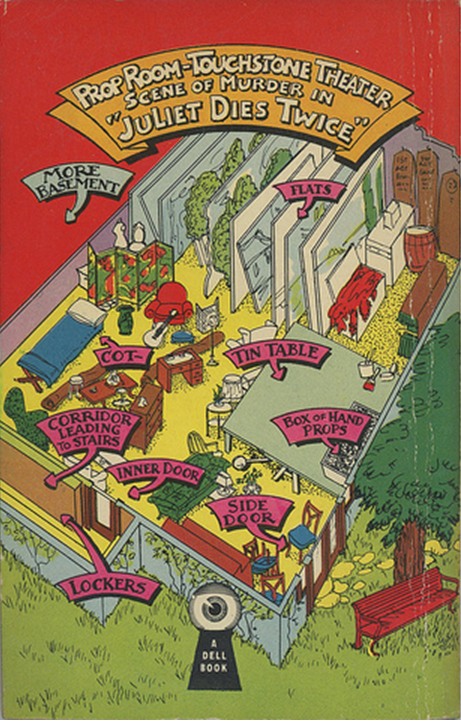 Lewis also seems to have reinvented Lt. Richard Tuck, her very smart and capable police detective for this second outing. Gone are his capacity for compassion and his use of imagination to get inside the head of a murderer. Instead Tuck has been reshaped into one of many cookie cutter detectives in the genre, a wisecracking jaded cop. He shares the crime solving stage with a smart alecky know-it-all amateur sleuth -- the often irritating Eudora York, a psychology and theater major at the college. Together they investigate the murder of a student actress who was to play Juliet in Shakespeare's tragedy and offer up odd theories about the personality of the "fiend" who did the deed.


But the story is redeemed by Lewis' crisp writing and her cast of supporting players. Each of the student actors and actresses has some quirk or idiosyncrasy that makes them stand out from the rest of the cast. They range from five foot five Paul Ober, the best actor of the lot frustrated by his being typecast because of his height to Ames Hanna, Eudora's wealthy playboy of a boyfriend whose sick sense of humor has Eudora worried that he may be a lunatic himself.

Every now and then Lewis also surprises with a scene of poignancy or jolts the readers out of the dream world of play acting and Shakespeare's star crossed lovers into the reality of a country on the verge of war. Midway through the story one of the most superficial actresses – Meg Fife, a graduate student in the theater program – does an about face and allows us a glimpse into who she really is. She laments that the world is changing around her, that the stage once provided for her an escape but now she is afraid. "I've tried to tell myself that I'm seeing the slow crumbling of a philosophy of life which I and all my generation believed to be the only one. There’s khaki everywhere now, you hear soldiers marching past your window early in the morning[...] Everywhere the individual and his aims and plans are growing less and less important. I try to tell myself that's what frightens me." It was the most moving and real scene in the entire book, especially since it has an eerie resonance for our modern times when war and violence seem inescapable. 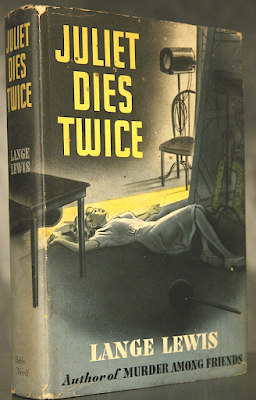 There are a few twists that call to mind some of the best from Agatha Christie’s cabinet of magic tricks. I was reminded of an overused detective novel trope that crops up most obviously in Peril at End House, but Lewis manages to find a new way to pull off that trick. She fooled me at least. The lunatic will end up playing a large role in the denouement and his appearance helps to explain some of the creakier elements of the contrived business surrounding the baffling murder of Ann Laird. The revelation of the murderer, however, is anticlimactic. With a motive firmly rooted in a reality of ennui and nonchalance the final chapter may have resonance for a 21st century reader. For me I was craving a more satisfying, fantastical solution that merited all the clever puzzles that had held my interest for the majority of the book.
Posted by J F Norris at 3:18 PM