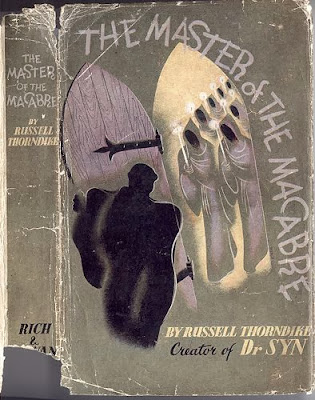 In the tradition of works like Arthur Machen's The Three Impostors and R. Austin Freeman's The Uttermost Farthing: A Savant's Vendetta (which this book markedly resembles) The Master of the Macabre (1947) is another collection of supernatural and macabre tales that take the form of a quasi-novel. Taylor Kent, writer of thrillers, is travelling by car to deliver a package to Charles Hogarth. En route he encounters a raging snowstorm, loses control of his car and crashes not far from Hogarth's home. Kent now injured with a broken ankle is rescued by Hogarth's servant Hoadley and taken to the house where he soon becomes both guest and invalid. While recuperating Hogarth shows Kent his collection of macabre objects and relics he has amassed over several decades. Each one has its own peculiar story and over the coming nights Hogarth proceeds to relate several stories.

The book has an amazingly similar structure and skeletal plot to The Savant's Vendetta in which a sinister collector of human skulls also tells a variety of stories to a house guest. Each novel has an underlying connecting story that recurs throughout the narrative resulting in a surprise climax. In the case of Thorndike's book the climax has to do with the ghost of the corrupt Abbott Porfirio who haunts Hogarth's home and who appears in a series of apparitions which Kent first attributes to nightmares.

An aspect of the novel I found most interesting is Thorndike's take on the haunted house as a living entity. This idea had previously been explored by Bulwer-Lytton in the late nineteenth century in "The House and the Brain" and to much greater effect in the mid 1920s in Cold Harbour by Francis Brett Young. The topic would continue to be explored by generations of supernatural fiction writers and would reach its apotheosis in 1959 with The Haunting of Hill House by Shirley Jackson and continue to be reworked by Richard Matheson (Hell House) and Robert Marasco (Burnt Offerings) in the 1970s. In Thorndike's book prior to the serial narration of the stories of the objects both Hoadley and Hogarth discuss the weird influence the house has on its occupants. The house is described as being "susceptible," exhibiting "the strangest properties", displaying "powerful and insidious" effects. There is talk of the Spanish Chamber being the "most active" room in the house with weird examples of what goes on there. Thorndike carries this discussion to the objects themselves when Hogarth says to Kent:

"Come over to the tapestries and I promise you they will treat you entirely sympathetically. You may think me childish, but I have always hugged the belief that every so-called inanimate object in this world, whether beautiful or ugly according to our standards, has a being--an entity of its own. When you are fond of a thing -- your typewriter, for instance -- why shouldn't that thing be fond of you? I almost think that things can think."


The "insidious influence" becomes a running theme throughout the book as each relic in Hogarth's collection has its story told. Yet this theme is rarely mentioned in any reviews or criticism of Thorndike's book. That Thorndike was an early proponent of this popular motif in haunted house literature cannot be denied. It is unfortunate that his obvious fascination with the idea of objects that are alive and a house with influence has been overlooked by supernatural fiction critics.

Instead Thorndike is usually discussed for his other obsession -- graves, decaying corpses and the grisly aspects of death. Building upon an already rich library of supernatural and weird fiction tropes Thorndike is clearly paying homage to the grotesque penchants of Poe, Machen, James and Blackwood in these stories. Pickled maggots, graveyard ghouls, live burial and other assorted often repulsive set pieces all make their appearances.

Of the stories I enjoyed the most are his very Poe-like tale of a man fleeing execution by hanging  during a breakout of plague and his bizarre idea to disguise himself as one of the victims of the disease. When is thrown into a mass grave his harrowing, nightmarish escape recalls some of the more grisly sequences in the tales of the American master of the macabre. There is also a very well done and brief story of a 20th century Ahab named Captain Dawson and his obsessive pursuit of a man-eating shark known as "Great Crafty."  It's both a nod to Moby Dick and an eerie prediction of Peter Benchley's massive bestseller Jaws.  There are other tales as well which make up quite a mixed bag (many of them go on far too long)  including a very strange one about the origins of a shovel with a horseshoe welded to its handle and a protracted tale about the scarlet lining of an Indian soldier's coat that has several sequels throughout the book.

The Master of the Macabre was released earlier this year in a new trade paperback edition from Valancourt Books. It includes a biographical introduction about Russell Thorndike by supernatural fiction authority, avid book collector and writer Mark Valentine. The book is available through Valancourt Books and amazon.com in both tangible and digital editions. I'm very happy to see The Master of the Macabre back in print as it has so much to recommend it as both a turning point in haunted house literature and the development of the supernatural short story.
Posted by J F Norris at 8:02 AM