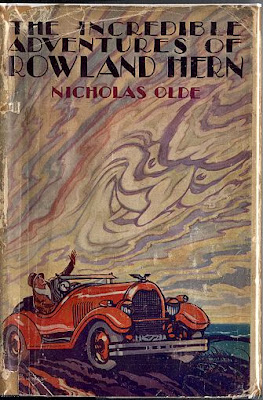 Who was Nicholas Olde? No one seems to know. In addition to this collection of clever and often quite funny mystery short stories, Olde apparently was also the author of two slim volumes of poetry published in pamphlet form in the early 1930s. It is generally thought that Olde was a pseudonym and attempts to uncover any biographical data on him have yielded nothing. Whoever he was he certainly read a lot of G. K. Chesterton. The plots and dialogue are rife with the kind of paradox that Chesterton imbued his mystery stories—not only with Father Brown but also in the Gilbert Pond stories and the tales found in The Man Who Knew Too Much.

Another Chestertonian aspect of some of the stories is an element of the supernatural and the impossible crime, or more often an impossible problem. Chesterton employed these often in the Father Brown stories. Readers will surely find analogies between many stories. “The Windmill” by Olde and “The Invisible Man” by Chesterton share similar solutions to their crimes, for instance. “The Monstrous Laugh” tells of a town haunted by phantom laughter and a local superstition that is similar to the seemingly supernatural aspects of “The Ghost of Gideon Wise,” “The Dagger with Wings” and several other Father Brown tales.

Robert Adey in his excellent bibliography of impossible crime stories and novels, Locked Room Murders, makes a side comment about Olde’s book having been undeservedly passed up for Queen’s Quorum status. Had it been listed in that Hall of Fame listing of seminal short story collections in the detective fiction genre, Olde would perhaps not have been condemned to obscurity and the book might not have descended into the limbo of forgotten and neglected works. In the countless anthologies devoted to crime and detective fiction published since the 1930s, only three publications have ever included a Rowland Hern story: “The Windmill” in Twelve Murder Tales, one of Jack Adrian’s anthologies for Oxford University Press (1988); “The Accidental Disembowelment of John Kensington" and “The Invisible Weapon” both in Japanese translation, the first in Hayakawa's Mystery Magazine (#468, 1995) and the other in a 1990s locked room story anthology, the title of which is Japanese (I cannot reproduce it here). It’s a shame this has happened because The Incredible Adventures of Rowland Hern contains some of the most ingenious and funny detective stories of the 1920s.

Like most detective fiction fans I had never heard of Nicholas Olde or Rowland Hern. No surprise given the fact that Olde and the quirky Rowland Hern have both been overlooked (or shunned) by nearly all of the crime fiction historians and critics. Through sheer serendipity -- that miracle that usually leads me to a treasure of a book -- I was lucky enough to obtain a copy through the internet in the spring of 2005. Lucky, because as I later discovered, it is among one of the rarer books in mysterydom and sought after by collectors of impossible crime stories. Later research revealed that the copy I stumbled upon was the only copy being offered via the internet and has been the only one for several years. An attempt to locate other copies, even in academic libraries or public libraries, showed less than ten copies held in the US and UK. There may be other copies in private collections, but I’ve been unable to verify the existence of even one. All of this made me think that someone ought to reissue this book. And the sooner the better.

As I delved into its pages I discovered the book to be filled with the bizarre, the surreal and the outrageous. Throughout the fifteen stories in the volume the reader is treated to several wicked clergymen, a devious physicist, a vengeful botanist, and many murderous lords, earls and other titled gentry. The plots involve a secret code in a lost language, a murder committed with an invisible weapon, a tell-tale beard, a near disembowelment, a village where no one laughs, and a killer whose motive is linked to a literal battle of wits.

The more I read the more I thought Olde cannot really intend these to be taken seriously. They must be detective fiction parodies. As such they are perhaps some of the earliest examples. I can think of only Philo Gubb, the correspondence school sleuth created by the American humorist Ellis Parker Butler, as the earliest of intentional detective fiction parodies in short story form. The first clue that Olde’s mood is far from somber in ...Rowland Hern are the characters’ decidedly British and often alliterative monikers. Here’s a brief line-up of these unusual suspects: Pounceby Brisket, K.C., Sir Chudleigh Chalfont, Mrs. Tregaskin Simpson, Hercules Herklot, Sir Pendragon Higginbotham and Porteous Pemberton- Drysdale. And the names give only a hint of the oddities that the reader will encounter.

In “Potter”, one of my favorites in the collection, Hern and his nameless sidekick head off to a boutique that specializes in the sale of exotic animals. Why? Because Hern is in need of an armadillo and the emporium has several sizes to choose from. Their advertisement is certainly enticing to anyone in search of exotic animals: “Potter & Hara, Wild Beast Merchants. Tigers from £85, certified Man-eaters 5s extra. Snakes and crocodiles a specialty. Free burglary insurance policy presented to each customer.” How can one go wrong with those promises? Exactly why Hern needs that desert beast is never explained. And must we really know? The mere fact that he needs an armadillo is surreal enough. How many fictional detectives have ever required an armadillo to solve a case? Or for anything! 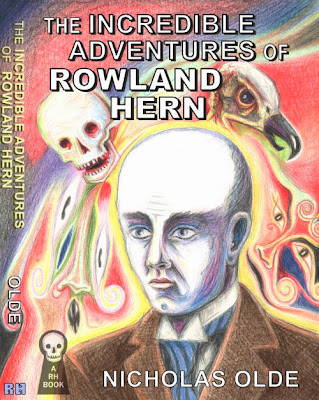 Olde’s sense of humor reaches its pinnacle in “The Mysterious Wig-Box.” For a story written in 1920s it displays a truly contemporary black humor presenting us with legal professionals who make light of killing and death during a sensational murder trial. Their lively repartee receives hearty laughter and applause from the irreverent courtroom attendees. The trial ends in a surprising acquittal of the serial killer thought to be obviously guilty. Later the defense attorney (one of the punning wits of the courtroom) is found decapitated in his home and his head decorated with his barrister’s wig is found in a wig-box in a railway station. Hern sees in this bizarre crime a particularly nasty sense of humor. The victim lost his head, after all, along with his ears and nose. What appears to be a wanton and insane act is in fact a purposeful and vengeful crime. When Hern reveals the killer’s identity his cohort is astonished. He says, “Apparently [they] were on the best of terms. […] They were even joking with one another during the trial.” Hern replies, in his characteristic Chestertonian paradoxical manner, “Yes, and that was the trouble.” It was their sense of humor which led to the crime. The first time I know of in crime fiction that the telling of jokes served as a motive for murder.

For decades The Incredible Adventures of Rowland Hern was one of the legendary and unattainable books of the genre. Thankfully, that is a thing of the past.  Mystery fans now have an affordable edition to enjoy available from Ramble House. Nicholas Olde’s original sleuth need no longer be imprisoned in that limbo of forgotten and neglected fictional creations. I suggest you acquaint yourself with him soon.

(This is an abridged, slightly altered version of my introduction to the Ramble House edition of The Incredible Adventures of Rowland Hern first reissued in 2005.)
Posted by J F Norris at 10:36 PM