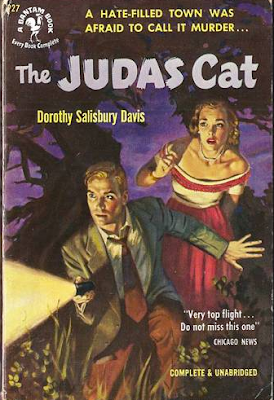 A mysterious death, a bizarre murder method, a locked room, inheritance schemes, fraudulent wills, secrets galore and a horde of suspects unwilling to cooperate -- all the makings of a grand old detective novel of the old-fashioned school. Dorothy Salisbury Davis takes these intriguing ingredients of a traditional whodunit recipe and created The Judas Cat (1949). She whips up a tale of long held family secrets while simultaneously exploring the effects of small town's population at the mercy of corrupt businessmen and an opportunistic mayor.

The death of 92 year-old Andy Mattson arouses the curiosity of reporter Alex Whiting and Chief Waterman. The man is found in his locked home with a starving and out of control cat prowling the outer room. Mattson died from an apparent heart attack according to the coroner, but with a look of utter terror on his face that leaves Alex Whiting asking several questions. What exactly happened in that room to terrify the old man? Was he frightened to death? Why was the room locked? Why did the cat need to be killed to prevent it from attacking the two men investigating the scene? Delving into the life of the reclusive nonagenarian Whiting and Waterman uncover a secret side to Andy Mattson known to only a few. He was a toymaker of ingeniously designed wooden wind-up figures and had sold many of them to a toy manufacturing factory in the next town over. Mattson was also a mathematical wizard with superior engineering skills and had collaborated on some designs for hydraulic equipment during World War 2. Both the toy designs and hydraulic equipment lead to another inquiry into the legal ramifications of patent ownership that complicate the plot and provide a strong motive for Mattson's possible murder. Add to these facts the search for a hidden will and there is quite a bit of fuel that make Mattson's death seem less than natural. 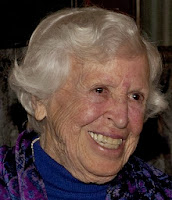 Davis in her first crime novel shows a mastery of both plotting and characterization. Though on the surface it has the appeal of a puzzling detective novel at the heart of the novel is a profound study of the after effects of a violent death on the entire population of a town. From the nosy neighbor Maude who clearly knows a lot more than she's willing to tell to the Machiavellian town mayor to a sinister veterinarian the cast of characters is rife with intriguing personalities with plenty of skeletons in their closets. A climactic town council meeting that s calls into question the investigative methods of Chief Waterman and his unorthodox use of a newspaper reporter as a deputy is one of the highlights of the story. During the meeting the chief accuses the mayor of plotting with wealthy Henry Addison, owner of Addison Industries and is sure that some business chicanery is at the heart of Mattson's death.

Anthony Boucher one of mysterydom's most insightful and prescient critics, called The Judas Cat "rewardingly perceptive novel" and predicted that Davis would be a writer to watch in the future. She proved to live up to the promise of this first captivating novel with a run of top notch suspense stories that further developed the crime novel and elevated out of the realm of the too often maligned whodunit.
Posted by J F Norris at 9:55 AM