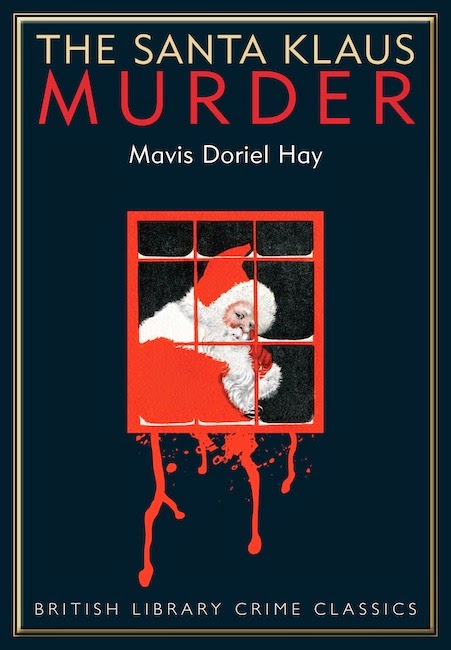 Chances are you have no idea who Mavis Doriel Hay is. She wrote only three detective novels in her brief career and none of them were published outside her native England. But obscure or not and regardless of her brief output the British Library has decided to revive an interest in this forgotten woman by reprinting all three of her books. Fittingly, as we approach the holiday season, her third mystery The Santa Klaus Murder (1936) is the first to be released with others to follow in June 2014.

The plot is classic for the era. Set in the home of Sir Osmond Melbury wealthy patriarch who is rumored to be writing a new will in favor of his very officious and very young secretary The Santa Klaus Murder is practically a textbook version of the English country house mystery novel. During the Christmas morning celebrations Sir Osmond is shot dead in what appears to be his locked and shuttered study. The suspects include his son and three daughters, their spouses and a handful of servants and houseguests. Yet only one person – a guest dressed as Santa who also discovered the body – appears to have had the opportunity to have committed the crime. And he is without a motive for doing so. The story has all the makings of an impossible crime for those who had real motives have perfect alibis at the time of the murder.

The detection is top notch and there are multiple mysteries the police inspector must solve in addition to the baffling murder. As with many mystery novels of the day seemingly airtight alibis may be completely fabricated as many of the suspects lie and collude in order to protect one another. The book also includes such familiar components as a map of the crime scene and a list of characters and their relationships to one another. The well drawn map of the first floor detailing the unusual architecture of the Melbury estate serves as the frontispiece. The reader will find himself referring to it frequently in order to understand the complex arrangement of where each suspect was at the time of the murder. 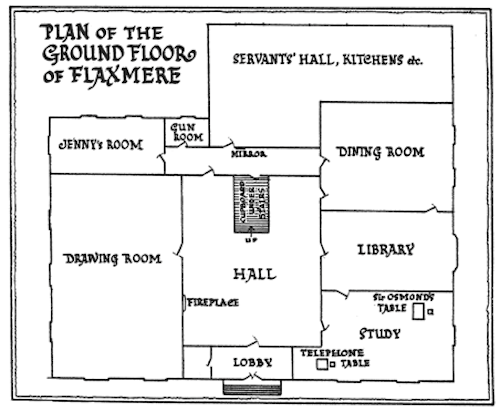 Well placed clues are easy to spot and lend themselves to a nicely done competition between the reader and Colonel Halstock, chief constable who serves as one of the several narrators. A surprise element that comes as a late discovery to the characters will seem rather obvious to well-read detective novel readers. For the highly astute it is indeed possible to solve the complicated plot as this is a rather well done example of a fair play detective novel with all clues and evidence provided to the reader and nothing withheld or produced at the eleventh hour. In fact there is a "Postscript" explaining all the clues that reminded me of the notebook pages of Mrs. Bradley in Gladys Mitchell’s mystery novels. Let this be a warning to those who like to peek: the last chapter mentions the name of the murderer many times over in an enumerated list detailing motive, means and opportunity.

For those not as entranced with the puzzle elements of the plot The Santa Klaus Murder also has much to offer in intriguing characters. Hay has a few words to say on the misery of a shell shocked World War 1 veteran (ironically named Evershot) and the effects he has on his wife and relatives. Edith, Sir David Evershot’s haunted and conflicted wife, is probably the most interesting and complex of the women characters and her role adds a much needed gravitas to the sometimes lighthearted proceedings. As in most detective novels there is the recurring motif of role playing compounded by a literal masquerade in the use of the Santa Klaus costume that the murderer uses ingeniously in order to confuse everyone’s notion of time and location.

Hay’s other mystery novels Murder Underground and Death on the Cherwell will be released in new editions by The British Library in the early summer of 2014. Curt Evans has already given us a taste of Hay’s earlier work in his review of Murder Underground, though it does not sound as engaging or clever as this last book.
Posted by J F Norris at 9:26 AM