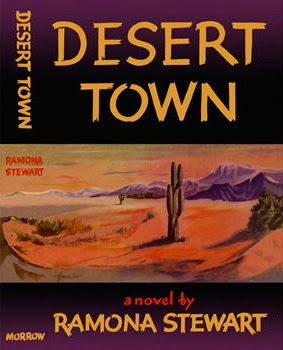 Based solely on the plot blurb on the rear cover of the Pocket Books edition any reader would think that Desert Town (1946) by Ramona Stewart is an early sleaze novel about a trampy, rebellious daughter and her domineering mother. "You little slut," her mother said. is the bold headline intended to grab the attention of a prospective reader. As usual the publisher is teasing and misleading by appealing to a taste for melodrama and raunchy language. A thorough reading of the book itself reveals so much more than vulgarity and a mother and daughter at odds with one another. Desert Town is a very strange exploration of love in all its forms and the pursuit of one’s desires. But not specifically sexual desire.

At the heart of the novel is one of the oddest love triangles in pulp fiction. Paula Haller – Eddie Benedict—Johnny Ryan. And it’s not the men vying for the woman as one would think in one of these triangles. Instead we find Johnny and Paula competing for the affection of Eddie. Yet there isn’t a hint of homoerotic lust between the two men. Theirs is a very intense devotion that defies brotherly male bonding with obedience and need taking the place of sexual attraction. While Paula is drawn to Eddie’s strong personality, his toughness, his brooding good looks Johnny wants Eddie because he needs him to achieve his status in the world of racketeers. But for the bulk of the book Johnny is depicted as a jealous lover constantly trying to get rid of Paula. He threatens her as would a woman who feels she is losing her man to a younger, sexier rival. He belittles her in front of Eddie similar to a women who is slighted.

Incredibly strange to read these exchanges coming from the mouth of a man who intimidates Paula with his eyes "the shade of redwood bark," his "animal warmth" she feels when she shakes his hand upon first meeting him and how he seems to demand of her "recognition of his slow moving, powerful aliveness." Stewart has a quirky way with her prose. She can be spot on in a descriptive passage about the desert landscape then like a beginner driver shifting gears too quickly she slips up and allows her tendency towards purple prose to sputter across the page with awkward word choices and indulgent metaphors. It's slightly forgivable for a first time novelist and the weirdness of these odd slips in writing adds another level of the surreal to an already strange story of attraction and repulsion among the three main characters. 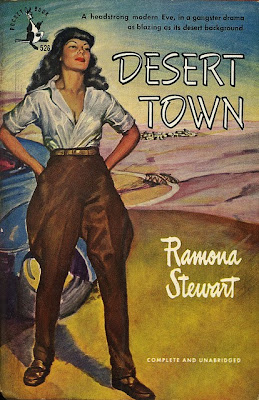 The rivalry between Paula and Johnny is further complicated by the fact that Paula is a dead ringer for Eddie’s recently deceased wife Angela. There’s an element of Rebecca in the way Paula uses this similarity to her advantage and it’s all the more creepy when you recall she is a seventeen year-old not yet graduated from high school and Eddie is at least ten years older, perhaps even older, though his age is never stated outright. Fritzi is always reminding her daughter of the inappropriateness of the relationship as well as warning Paula that Eddie is just plain no good.

The mixed signals are intentional on Stewart’s part. She develops the kind of misdirection found in a detective novel by allowing the reader to view Johnny Ryan only through Paula's eyes. This allows Stewart a narrative coup de grace delivered by Johnny Ryan like a boxer's knockout blow in the penultimate chapter.  His revelation crushes both Paula and Eddie as it was intended and he comes out like a champion.

Stewart’s other strength is in her creation of the supporting players who surround the trio and the frustrated scheming Fritzi. There is Lena Raines, the wife of the town undertaker, who trades in a promising career in biochemistry at a local university for a life of domesticity only to discover she has trapped herself in a marriage as barren as the desert town she thought would be a blissful escape. She turns to alcohol and racing her husband's car recklessly in a sort of dance with death. But she's always rescued and prevented from hurting herself or anyone by policeman Luke Sheldon to whom she is attracted and secretly desires. Sheldon turns out to be the savior figure of the book and the only decent and ethical cop in Chuckawalla.

The other policemen are Pat Johnson and Tom Hansen, another male duo in a near co-dependent relationship that borders on the perverse. Hansen is a former rodeo champion who had to give up his chosen life due to permanent injuries sustained while bronco busting. We learn he is a sadistic thug and Johnson, his only real friend, tolerates and sometimes encourages Hansen’s hobby of doling out regular beatings to the jail’s prisoners. At a poker game where the two cops are joined by Doc Waley and Jim Raines (Lena’s husband) the men discuss the death of a drunk who died in the jail. All know (as does the reader) that Hansen beat the drunk to death. But the conversation circumvents that reality and they spend the night dismissing the poor old drunk who died an accidental death. The casual nature of the talk perfectly captures how inured the town has become to violence and corruption. How they are willing to allow murder to go unpunished in order to preserve and maintain their twisted status quo. Even Fritzi Haller's assortment of brothels and her casino The Purple Sage are allowed to flourish in Chuckawalla thanks largely to her frequent bribing of the police while all other officials conveniently look the other way.

In addition to exploring the dark side of male friendships Desert Town is also a coming of age tale for Paula Haller. She wades through this crooked, deviant world trying to find a path to happiness and womanhood. Paula constantly complains of being treated as a child and wants to grow up quickly. She finds herself testing her limits, pursuing dream men and dream jobs, falling in and out of love as quickly as the desert winds change and the rainstorms come and go. And she encounters dangers and perils as she comes to see how her mother has changed and how the hedonistic businesses she runs are far from fun diversions and that the men she deals with are far from gentlemen.

Stewart's story originally appeared as a serial in Collier's magazine and was purchased by Hollywood prior to its being published in book form. The movie adaptation was retitled Desert Fury and came out in 1947, the same year the book was released. The movie stars Lizabeth Scott and Mary Astor as Paula and Fritzi; John Hodiak and Wendell Corey as Eddie and Johnny; and Burt Lancaster as an amalgam of the good Luke Sheldon and the evil Tom Hansen with good winning out over evil in the blending of the characters (even if he did end up with the bad cop's name). Amazingly, Robert Rossen who adapted the story retained nearly 80% of Ramona Stewart's original dialogue and scenes -- a testament to her dramatic skill.

Finally, here is some good news: Desert Town is the sophomore offering from Raven's Head Press. The book is in the final stages of production and will be offered for sale, if luck is on our side, by the end of this month. The new edition will include a killer cover design and a foreword by me on the unusual writing career of Ramona Stewart. She began with stories for the "slicks" and ended up writing occult thrillers of which The Possession of Joel Delaney, made into a very disturbing movie with Shirley MacLaine and Perry King, is her most well known. An announcement will be posted here when our edition of Desert Town is officially released. Stay tuned!
Posted by J F Norris at 9:47 PM