FLASH FICTION: The Terrible Thing at the Edge of the Lake 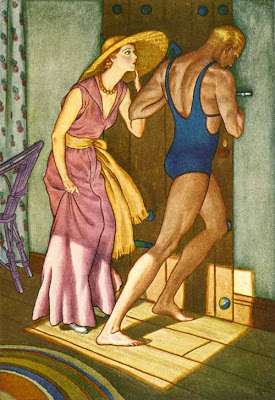 Yvette who blogs at "In so many words..." offered up a Flash Fiction Challenge for today.  Participants were to write a brief story about what's going on in the painting by Mario Cooper shown at the left. The picture was used to illustrate a story in one of the many magazines for which Cooper often did artwork. Writers were to ignore the original story (I don't even know what it was) and make up their own tale of why the young man in the swimsuit and the woman in the flouncy dress were locking the door.

Mine is a very strange blend of psychological and material horror. Today also happens to be Gay Pride Day in Chicago and I believe I was visited by the ghost of a certain playwright whom I have always admired. So here's a tribute to him. Apologies to the man for borrowing one of his characters and quoting a few of his lines. I secretly think might see the humor in it all.


*     *     *
The Terrible Thing at the Edge of the Lake
Why they called it a summerhouse was a mystery to her. It was barely more than a single room, sparsely furnished with a tiny fireplace in the corner as its sole source of heat. Far too small for a house, you could barely call it a cabin. A shack really. But a cozy shack someone transformed into a private retreat here tucked away in the woods just a few yards from the shoreline of Moon Lake. The casino was only a ten minute walk through the neglected path and polka music was drifting from the ballroom. She glided to its syncopated rhythm thinking to herself. She came here for an escape, to meditate, quietly summoning the courage she needed. In her mind she carefully constructed the sentences, choosing the words carefully, trying not to make it as hurtful as she knew it was going to be.

The door burst open. A rugged young man drenched from head to toe in a tight fitting swimsuit that showed off his athletic build came rushing in. He was startled when he saw her dancing with herself.

"Huh? What are you doing here?"

"Oh Allan, you've been swimming. Come here by the fire."

"Allan? You've got the wrong guy." He headed for a small bureau, opened a drawer and pulled out a towel and began drying himself.

"You know what's going on out there?"

"Dancing, gambling, drinking, laughing. They're all too gay for me. Such a sad night this is. The loss of love is always sad."

He stared at her and smirked. Drunk. Sure as hell she's drunk. Dancing with herself in this shack.

"Someone said a guy fell in the lake. I jumped in and pulled him out. His throat was torn open, his head's a bloody mess. Looks like some kind of animal got him."

"Allan, I know all your secrets. There's no use covering them up with romantic tales."

The music stopped by now. Sounds of a crowd replaced the lilting jaunty melody. A woman screamed.

"Listen, I'm not Allan, lady. I told you that. What are you doing here? This is for the lifeguards only."

"I saw you with him. Caught you in flagrante delicto. Disgusting it was. No… that's not right. You. You disgust me! Yes. That's it."

She paused, took her scarf from her neck, and draped the lampshade. The light in the room softened and was tinged with the colors of roses and lilacs that made up the printed pattern. She started to sway to a melody only she could hear.

"Say… Do you know something about that kid out there?"

"Well, I wouldn't call him a boy. Looked to be early twenties. I don't know about beautiful either. His face was pretty much gone. And there were weird footprints around the shore edge, too. Some kind of animal attack, I'm sure. But never seen any prints like those."

Another scream. This time not a woman's. Something bestial. Something from the abyss.

"What the--?" He ran to the door and threw the bolt. Grabbed the only piece of furniture, an overstuffed armchair, and shoved it against the doorway.

"Don't be frightened, Allan. You are what you are. A temptation to everyone, both women and men."

"Stop calling me Allan. Didn't you hear that? That thing by the lake out there?"

"Cripes! I'm stuck in this shack with a kook. We've gotta get outta here. There's a way out through the basement I think. Come with me, lady."

"Call me Blanche, please. After all, we're husband and wife, Allan." She was at the other window seemingly ignoring him and the threat at the door. She looked out into the cloud covered sky. "I've been looking for the Pleiades tonight -- the Seven Sisters -- but those girls are not out tonight."

A shot. Then another and another. More screams and shooting. Once more that terrible unearthly cry echoed in the woods, closer this time. Footsteps crunching in the pine needles strewn in the pathway to the door of the shack. Scratching at the door. A pair of gleaming eyes peering in the window.

The window burst in a shattering of glass. A hairy clawed arm intruded into the space. The young man who wasn't Allan grabbed a log from the pile near the fireplace and beat furiously at the arm, claws digging into the wood, then his wrist. He let loose with an excruciating wail of pain.

She stood in place with a look of concentrated effort. Thinking of the lack of stars in the night sky, thinking of the right words for Allan. She watched as the young man who wasn't Allan was dragged out of the window frame screaming for his life, screaming for Blanche.

The music started up again. Blanche unbolted the door and made her way back to the ballroom. She resolved to have one last dance with Allan. She would abandon him there with the choice words she just composed. He was never really hers. And it was all so disgusting. She cocked her head and caught that haunting tune again. She started to cry. That melody -- that lively polka of the Varsouviana -- would never sound the same to her after tonight.