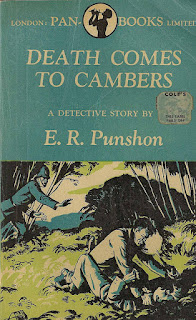 Death Comes to Cambers (1935) was my second venture into the work of E. R. Punshon. I was slightly disappointed. The book is epic length for story essentially about one strangling murder and theft of some jewels. Its 288 pages felt twice that long due to long interview sequences between Bobby Owen, Punshon's policeman detective, and each of the suspects. The problem is that each of the suspects is interviewed twice. In some cases Owen returns for a third time to ask even more questions. This see-sawing between suspects draws out the story, lessens tension and frustrates the reader. A detective story while it may uncover the past and deal with past events should move forward in time, ever forward towards the solution. Travelling back to re-interview someone already given ample stage time in the narrative is allowable to a point, but constant instances of repeat interrogation seems to me like a writer who is padding his story unnecessarily.

Additionally, some of the characters take the time to pontificate on their personal views and raise some topical issues that Punshon apparently was taken with at the time. This is the second detective novel in which I have encountered a debate between religious views of the origin of man in stark contrast to a scientist exploiting Darwinian evolution theory for his own ends. An amateur archeologist and a rigidly conservative minister are at odds in their battle between science and faith throughout the novel. Punshon attempts to make this a possible motive for the murders that occur in the story but it's a weak attempt.

The archeologist is convinced his theory of the development of modern man will turn the world of anthropology upside down. He claims man's use of tools and the reason for using them is what separates man from ape. The conservative reverend calls his theories blasphemous.

Only in the final third of the novel when Owen starts to do real detective work as opposed to routine questioning does the book truly get interesting and enter the realm of originality. There are two encoded messages found in a newspaper Personals column Owen must solve. One is so involved the solution to the code rivals that of the mechanism of the Enigma machine that Alan Turing figured out. The murderer's ingenious method of creating his alibi for the time of the murder is what I consider the book's saving grace. And there's one other surprise in the finale that breaks the rules of a traditional detective novel that I also admired.

Unlike Diabolic Candelabra fascinating in its oddities from start to finish, the characters and situations in Death Comes to Cambers are overly familiar and often dreary to get through. The gossipy landlady, the garrulous tradesmen, a barkeep who knows everyone's business all turn up as they do in most of these mysteries set in small English villages. It doesn’t help that in this book Punshon is still clinging to a baroque writing style that belongs to the early Victorian era. He constructs paragraph long sentences that could be trimmed for coherence and readability. Often these long sentences are really several sentences run together with a series of useless commas and dashes. As a matter of course these long sentences then make many of the paragraphs run uninterrupted for the entire page length. Cumbersome is an understatement.

Death Comes to Cambers is a very scarce book, possibly a genuinely rare book. I found a copy in France, but had to pay an exorbitant fee to have it shipped to me. Currently online there are only two copies for sale -- one in English, the other in French. There is a second English edition listed by Le-Livre.com, but this the one I bought and the seller has obviously not removed the listing from other bookselling sites. I wouldn't lose any sleep over not finding a copy. It's a good novel but it takes some endurance and patience to get to the meat of the story.
Posted by J F Norris at 8:33 AM