This was found inside one of the many copies of The Omnibus of Crime I have purchased over the years.  The Omnibus of Crime was the Book of the Month Club selection for August 1929. Inside the copy I bought was the ad seen below for the September BOMC selection, Ultima Thule by Henry Handel Richardson, a book and author I knew nothing about until I did my research for this post. 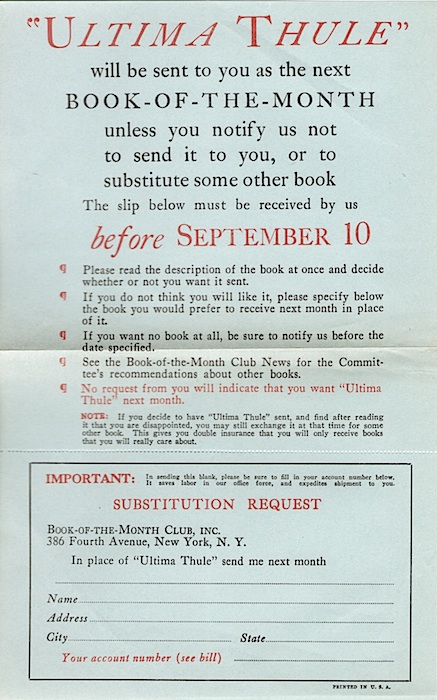 The Book of the Month Club was only three years old in 1929.  Weren't they polite in their requests? And that deadline date in giant red letters is very helpful.  I remember being a member of one of their offshoots, Quality Paperback Book Club, in the 1980s and the reminders were not anything like the one above. I usually lost the dumb postcard or forgot to mail it back by the deadline and ended up with books I had no desire to read let alone own.

"Henry Handel Richardson" turns out to be the pseudonym for Australian writer Ethel Florence Lindesay Richardson who you can read about at the website for the Henry Handel Richardson Society.  (Is there a society for every forgotten author of the past?). Ultima Thule is the final novel in a trilogy about an Australian physician named Richard Mahony and is based in part of Richardson's own father and her upbringing. The three novels that make up the trilogy are Australia Felix (1917), The Way Home (1925) and Ultima Thule (1929). All three were later published in an omnibus edition and titled The Fortunes of Richard Mahony in 1930.  For a synopsis of Ultima Thule click here. Interestingly, it was only with the publication of the final volume that the entire trilogy, The Fortunes of Richard Mahony, was suddenly recognized as a great work of fiction.
Posted by J F Norris at 11:53 AM