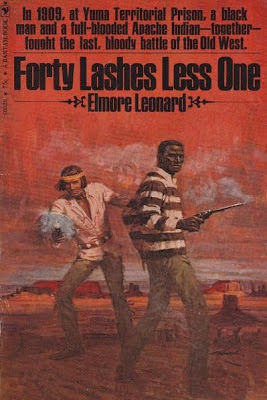 I wanted a western for today's tribute to Grand Master Elmore Leonard so I chose Forty Lashes Less One (1972) And here were my reasons: very odd title sure to have some unusual meaning, the very cool cover with two gun-toting characters in threatening poses and early 20th century prison garb, and a mention in a 2009 blog review that the book was going to be a Quentin Tarantino movie. While he may have been inspired by this book Tarantino's Civil War era spaghetti western Django Unchained, which won him his second Academy Award for Original Screenplay, has little in common with Leonard's novel. I have not seen the movie but based on the trailer and reviews I have read the only thing it shares with Forty Lashes Less One is a lead character who sticks it to the white man. And but good!

Based on the cover of the original 1972 paperback (seen at left) I expected this to be a prison break novel. I was pleased to discover it's more than that. There is a helluva a lot going on in this book beyond the actual plan to escape from jail. Ostensibly set in 1904 in a crumbling prison in the Arizona desert where the inmates are awaiting transfer by train to a brand new facility it felt more like a book set in the 1950s. No matter, the characters and situations are the selling point as they usually are in any book by Leonard. Everett Manly, a failed minister, volunteers to serve as interim superintendent of the Yuma prison and while there decides to try some inventive forms of prisoner rehabilitation involving an unusual combination of Bible thumping sermons, lessons in the origin of different races, and -- of all things -- athletic competitions.

It's all sort of an accident how it comes about. Harold Jackson, a wily black prisoner, and his cell mate the simple-minded Raymond San Carlos, an Apache who likes to think of himself as Mexican, have not been getting along. The insult each other and have been fighting regularly. The usual punishments don't seem to be working. Mr. Manly is determined to bring out the good in each man and make them friends, but his Bible lectures fall on indifferent ears. Until he makes the mistake of saying "We are all related by blood" leading to a hysterical discussion that begins with Adam and Eve and leads to talk of incest and miscegenation. Harold and Raymond grill Manly mercilessly. At first Manly taken aback but since he finally has gotten their interest he answers their questions getting into deeper water as he goes. Then he hits upon a brilliant idea. He talks of the legacy of Geronimo as a hero to the Apaches and the legends of the Zulu warriors of Africa. Manly shows that not only do Harold and Raymond share metaphoric blood they share an ancestry of heroic warriors. It's an epiphany of sorts for all three.

Soon Mr Manly finds he has two warriors in training on his hands. There are foot race competitions and handmade spear throwing contests. Harold and Raymond now make up their faces with stripes of iodine and white paint inspired by illustrations they saw in Mr. Manly's books. Harold even says all that is missing is a real lion for him to spear. The prison yard becomes an arena for a mini Olympics between Black man and Indian with all the white prisoners acting as their audience of gamblers and hecklers. And all the while Mr Manly never realizes that his seemingly naive pupils are waiting for the precise moment to prove what they truly are capable of. 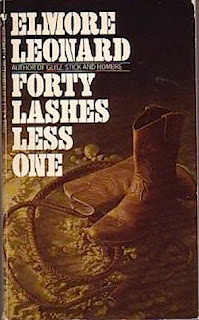 While the dubious religious education and more successful athletic transformation of Harold and Raymond is going on Alpha prisoner Frank Shelby and his gang of sycophants are plotting their escape. With the help of Frank's brother Virgil who makes weekly visits each Sunday Shelby is hoping to sabotage the train that will transport the prisoners from Yuma to the new prison in Florence and free the gang of eight including Norma, one of two female prisoners who has a few tricks up her sleeve. But no fictional prison break ever goes as planned and with two warriors on the verge aboard the train, underestimated by both Shelby's gang and Mr. Manly, there is plenty of action and revenge waiting to explode.

This was one quirky western. I liked the subversiveness of it all. The characters are so utterly unexpected in how they change from beginning to end.  Harold and Raymond seem like patsy symbols, dumb and dull at first but Leonard cleverly undermines the entire story as roles are reversed and Black man and Indian once sworn enemies become ever sure and true allies. Manly who you want to succeed at his goofy experiments is a character to be both ridiculed and pitied. Shelby is typical of the villains Leonard creates -- vile and loathsome without one redeeming quality you're hoping for an equally vile end for the man. Somehow everyone around Shelby suffers worse than he does. Glib, self-assured, conceited, and essentially untouchable, he's a bad guy you'll see again and again in Leonard's books. Does he get his comeuppance? You'll have to read the book to find out. The ending is absolutely perfect. If you don't bust out laughing I guarantee that you'll break out in a broad grin.
Posted by J F Norris at 4:51 AM