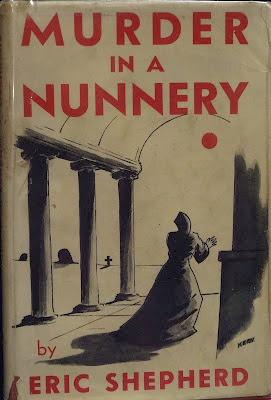 Jacques Barzun is quick to point out in his brief Catalog of Crime entry for this humanistic detective novel that the setting is not a nunnery but a convent school. True the primary setting is a school, but where do nuns live but in a nunnery? More hairsplitting from our dear departed academic. Titular misnomers aside Murder in a Nunnery (1940) was quite the sleeper when it was first published. Though published by small press Sheed & Ward it managed to get picked up by the Catholic Book Club in 1940 and turned into a minor sensation. Twenty two years later it was reprinted as a paperback from Dell's Chapel Books imprint and sold thousands of more copies.

Eric Shepherd has written both an engaging detective novel and a primer in the life of 1940s British nuns. Shepherd's sister was a mother superior according to a book review in Rockford, Illinois Catholic newspaper The Observer, (see the article here) so he presumably knows of what he writes. The most interesting thing I discovered was that most of the elderly nuns refer to themselves as Mother rather than Sister. Perhaps that's peculiar to England or to this order, though we are never told to which order these nuns belong. But onto the story itself...

Baroness Sliema, a temporary guest at the convent, has been found stabbed in the chapel during daily mass. Not particularly well-liked by both the staff and the students her death becomes the topic of girlish gossip peppered with flagrant talk of a well deserved violent end. When the police are called in we begin to see what Shepherd has in mind as the secular world meets the religious world head on. The police are in for quite an education themselves as the murder investigation progresses.

First to arrive on the scene is the brash Detective Sgt. Osbert whose insensitivity and rudeness is matched only by his own discomfort at being treated as a guest, not as a cop, by so many old women in funny costumes. He can't wait to call in Scotland Yard and hand the case over to Chief Inspector Andrew Pearson. Pearson is the complete opposite of Osbert -- gentlemanly, suave, decorous to the point of embarrassment. He first mistakenly asks to see the Lady Abbess and is immediately corrected, almost reprimanded, by Mother Peck, second in command:, "Reverend Mother is not in the habit of receiving visitors on the doorstep." Pearson experiences his own level of discomfort as well, but he soon warms up to Reverend Mother Superior in whom he sees kindness, wisdom, and a love of strict discipline. It is the disciplined life of the nuns that most impresses Pearson and he surprises himself in drawing analogies between life in a convent and the life of a policeman. As the case progresses he sees that nuns and police have a lot in common. 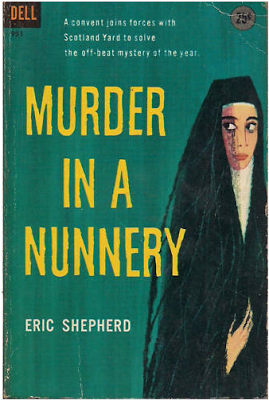 There is an element of the rambunctious gang of St. Trinian's among the girl students. Led by Verity Goodchild, who is anything but good or truthful, they are the typical ragtag bunch of unruly girls you come across in books of this sort. Inez Escapado, a tall tale telling South American student, is saddled with thick phonetic accent Harry Stephen Keeler would've been proud of. And Philomene, Verity's best pal, has a temper issue and a speech impediment that comes and goes depending on how emotional she gets. You'd expect them to all turn Nancy Drew and try to solve the murder for themselves but they are more interested in the ghostly figure of a mysterious nun seen wandering the grounds at night. Only Verity is brave enough to wander the school grounds looking for evidence. While trying her best at girl sleuthing she encounters a group of nosy tabloid reporters and photographers and ends up the subject of exploitive glamour shots. One of the photographers rewards her with a piece of cloth he found that turns out to be a torn piece from a nun's veil. Evidence! Apparently, there was someone in a nun's habit roaming the grounds at night. Whether it was a genuine nun or someone in disguise Verity leaves to Chief Inspector Pearson to uncover.

Among Pearson's primary adult suspects are the haughty Venetia Gozo, a Maltese woman who acted as secretary to the Baroness; Mrs. Moss, the Baroness' companion; Baron Sliema, the victim's son; and Mr. Turtle, the handyman-gardener for the convent grounds. Turtle was my favorite of the lot. He seems to have wandered into the book from the pages of a George Eliot novel complete with Yorkshire accent. He's filled with the refreshing kind of common sense and common talk so welcome after pages of theology and philosophy from Reverend Mother and girlish antics from the students. Turtle is also the only man in this world of women. Having the inspector around gives Turtle a chance to kick back and let down his guard. His invitation to Pearson at the tail end of his interrogation scene is priceless: "And should you ever find the oppression of women too much for you up at the 'ouse, you come down 'ere and refresh yourself with Turtle."

One more thing about Pearson's detective skills. He is equipped with an overly sensitive sense of smell. Throughout the book his olfactory bulb is assailed with a pungent odor that seems to permeate certain rooms. It's vaguely familiar, but each time he tries to put a name to the scent he comes up wanting. The piece of veil Verity finds is reeking with the smell. It trails throughout the cloisters near the scene of the crime. The smell haunts him throughout the story. And it will prove to be the most damning clue in determining the identity of the murderer when that odor's source is discovered and it's given a name.

In looking for images from the various published editions of Murder in a Nunnery I discovered it was also adapted into a play. Emmet Lavery, a screenwriter, condensed the large cast of characters to one of only eight adult female roles, three adult men, and five girls. It was produced in May 1942 for Catholic Theatre Guild of Los Angeles with the playwright also serving as director. Incredibly, for what appears to be a community theater troupe, several of the leading roles were played by film actors. Lavery must have had impressive studio connections. In the role of Reverend Mother Superior was Margaret Wycherly best known as James Cagney's mom in the classic gangster movie White Heat. Inspector Pearson was played by Pedro de Cordoba, a character actor with over 125 of films to his credit including Saboteur, The Mark of Zorro, Juarez, Captain Blood and Anthony Adverse. John McGuire, a B movie leading man and supporting player whose best role is probably as the reporter accused of murder in Stranger on the Third Floor, played the shifty Baron Sliema who in the play adaptation has an added secret and a surprise scene not found in the book. I bet that was some production to watch.

Fourteen years later Eric Shepherd wrote a sequel called More Murder in a Nunnery (1954). I have yet to find a copy so I am unsure if Pearson meets up with Reverend Mother Superior at Harrington Convent School again or if she acts as an amateur sleuth with her sister colleagues without Pearson.
Posted by J F Norris at 12:35 AM