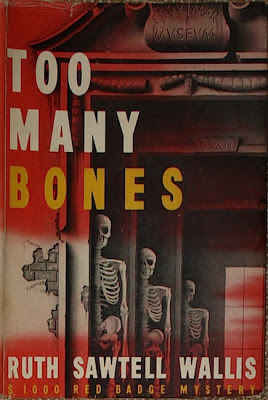 Long before Kathy Reichs was writing forensic anthropology mysteries there was the long forgotten academic and physical anthropologist Ruth Sawtell Wallis who perhaps unknowingly created the first mystery that would eventually become a very popular subgenre. Her book Too Many Bones (1943) uses the study of a group of closely related skeletal ancestors as the intriguing background for her debut mystery novel. The involved study of those bones are integral to the solution of a mysterious death that occurs in the story.

Kay Ellis finds herself in the lucky position of assistant to Dr. John Gordon, a bookish and of course stunningly handsome scientist, currently very involved in studying the skeletons of the Holtzermann Collection housed in the William Proutman Museum in the Midwestern town of Hinchdale. Most of the staff is surprised that the K. Ellis they were expecting turns out to be a woman, but none so taken aback than the imperious director of the museum Zaydee Proutman, young widow of recently deceased William. Zaydee not only keeps her eye on the business of the museum but on the handsome Dr. Gordon in whom she is very interested. Mrs. Proutman is none too happy that the museum's new assistant is a 21 year-old woman with brains and looks.

A bitter rivalry starts up almost immediately between the two women and is worsened by the outbursts of alcoholic musician Randy Bill who has been spurned by Zaydee. Add into the mix the sinister Alpheus Harvey who would like to be running the museum himself while Zaydee he thinks is only fit for publicity fundraisers and newspaper photo-ops; spinsterish Alice Barton, the museum's librarian who has a waspish tongue and a taste for gossip; an opinionated Swedish immigrant engineer in charge of the museum's faulty furnace and heating system; and a friendly but secretive janitor named Esquire who would like to marry Mrs. Proutman's personal maid Isabelle but is prevented from doing so and you have all the ingredients for impending murder. 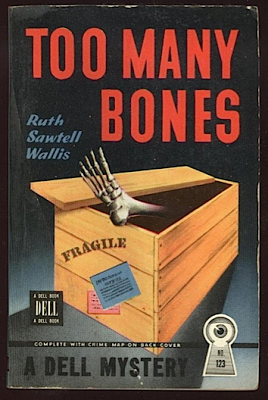 When Randy perishes in a horrific car accident and Zaydee disappears the very same night Sheriff Barton Brown suspects foul play. The museum and the town are searched thoroughly but it yields no sign of Zaydee or her belongings. Brown rushes through an inquest in order to put the blame solely on Randy calling it murder and suicide. Kay, however, sees lots of holes in Brown's hastily closed case. She turns detective to uncover the reason for Zaydee's sudden and convenient disappearance. In the course of her work she learns the grisly truth about what happened to Zaydee, digs up several deep dark secrets, and reveals an elaborate conspiracy to cover-up murder.

When Wallis finally gets around to making her book a real mystery -- more than halfway into the involved plot -- it picks up in momentum and interest. Prior to Kay's turning amateur sleuth the book reminded me of the kind of romantic suspense novel that was the specialty of Phyllis Whitney whose first mystery, Red Is for Murder, was coincidentally published the same year as Too Many Bones. Wallis' book is mostly about the rivalry between Zaydee and Kay and their attraction to the Byronic Dr. Gordon. There is a bit too much time spent in introducing her rather large cast and setting up the numerous motives for a possible murder. But her writing is always top notch, never dull, never stupid. There is some sly feminist commentary slipped into the story, too. Kay's complaints of the treatment of women in academia, especially unfair wage differences between men and women, make the book seem timely and resonant even for a 21st century reader. 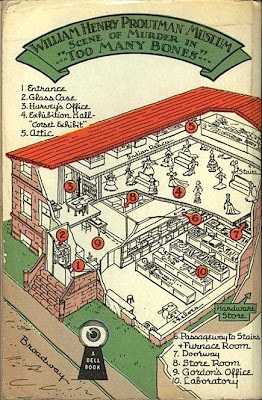 The anthropological background enlivens the story when the soap operaish elements threaten to take over the book. Late in the story Kay talks about what the FBI can do with bones in determining blood type that made me think that Wallis was way ahead of her time in terms of new spins with the mystery novel. Even more remarkable is Wallis' treatment of the two black characters who have their own love story and are primary suspects in the murder investigation. Frequently in Golden Age detective novels (and nearly all popular fiction for that matter) minority servant characters serve as comic relief or are practically invisible in the story. Both Esquire and Isabelle have rather large supporting parts and are given a human dimension atypical for the era. Their roles, in fact, are larger and less cartoonish than than the gaggle of D.A.R. ladies who visit the car wreck site and gawk and gossip in one of the odder moments in the book. It's no wonder that for these innovations Wallis received the Red Badge Detective Novel Award from publisher Dodd Mead joining a list of writers that includes Clifford Knight, Hugh Pentecost, Christianna Brand and Marco Page.

Ruth Sawtell Wallis was herself an academic. Her work as a mystery writer was a happy accident and only a small portion of her professional life. Wallis' real body of work is devoted to anthropology and includes a book on the first Azilian remains found in France, children's growth studies for the Bureau of Home Economics, and with her husband an ethnography of the Micmac Indians in Eastern Canada. A brief overview of her work in the field of anthropology can be found here.

For once in a long time I have reviewed a book that is relatively easy to find. Too Many Bones was published in hardcover by Dodd Mead, reprinted in hardcover by Grosset & Dunlap, and once again in paperback by Dell. The Dell mapback can sometimes be found for $3 in used bookstores in North America. I found at least ten copies for sale online ranging from $7 to $20. Happy hunting!

READING CHALLENGE UPDATE: And finally -- Too Many Bones serves as my last book in the "Vintage Mystery Reading Challenge 2013 - Scattergories" sponsored by Bev at My Reader's Block. This fits the category Yankee Doodle Dandy for any mystery set in the USA.