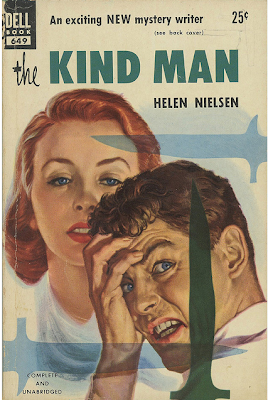 A recent post on Friday's Forgotten Books host site, pattinase, asked us "Do Men Read Women?" I know I do, but I thought I read a lot more women writers than I have done so far this year. Out of my total of 45 books in 2013 I have read only a measly twelve books by women writers. With Mother's Day around the corner and my guilty conscience nagging at me I thought I'd write up another overlooked and very good crime writer who is a woman.

The Kind Man (1951) is Helen Nielsen's debut novel and eerily it shares quite a bit with another book by a woman writer published that year and previously reviewed on this blog -- A Gentle Murderer by Dorothy Salisbury Davis. In both books we have a young man quite obviously troubled, possibly mentally ill, and haunted by his past. In both the two young men are obsessed with killing and a specific murder weapon. In Nielsen's book the tortured soul is Marty Weaver and he has knives on his mind almost all the time. Make that a specific knife. One that he happens to find and take home with him. And he thinks he must use it over and over to kill the people he loves. He's clearly not well, my friends. But is he really guilty of the murders that take place?

What makes this particular knife so special is that also happens to be a piece of evidence that went missing from a murder trial many years ago. That it should happen to turn up now and is used to commit another murder on a person who Marty barely knew is what drives the plot. Nielsen is fascinated with the effects of crime on the people who are left behind. Do the survivors manage to forgive? Can they learn to heal themselves after violence has ripped their inner lives to shreds? Can families ever be the same? Marty's anguished past becomes the key to understanding his obsession with violence, knives, and murder.

Though it sounds like a variation on the kind of thing Patricia Highsmith made famous a decade or so after, The Kind Man has its roots in detective fiction. Down to earth Chief of Police Homer Snyder serves as the detective of the piece. His reporter pal Max is a sort of Watson. With some prodding from Snyder Max goes digging into newspapers archives and uncovers Marty's notorious past. Under a different name Marty made headlines when he was a teen and so did the knife, a grisly weapon with a handle fashioned from an animal bone. That knife seems to be an exact replica of the one used to kill Francis Palmer.

The "kind man" of the title is Sampson Case, owner of a cannery business. His much younger wife Lola turns out to be one of those philandering temptresses that populated the paperback originals of the 1950s. Snyder soon discovers she is linked to the murder victim, Palmer, an avid gambler who was relentless in collecting his debts. For a while it looks as if Palmer's death is nothing more than gambling and gangster stuff. Several thousand dollars has gone missing and the search for the money and who took it from the corpse makes up a secondary part of the murder investigation. The case gets rather complicated when the man who discovered Palmer's body, a poor Mexican Sampson Case took pity on, is also murdered with that ubiquitous knife. Now it looks as if Snyder has a homicidal maniac on his hands. Sampson Case will play an important part in the unusual finale and the title of book will have greater significance than merely describing his demeanor.

Nielsen tells a great story. It's a multi-layered, complex plot riffing on the old-fashioned detective novels of the 30s and 40s but with a keen insight into the ravages of violent crime and its long ranging effects on those who have to pick up the pieces in its aftermath. The manner in which Marty's past keeps intruding, and the presence of the eerie knife make for an almost supernatural element controlling the characters. At times Nielsen is so masterful in her writing that she makes the murderer appear to be a menacing omnipresent force haunting Marty and not a real human being at all. And there is mounting suspense in the last eight chapters with gripping incidents following in quick succession. Impressive work from a novice to be sure.

Helen Nielsen went on to write  more crime fiction including the noir novels Detour (not the basis for Edgar Ulmer's movie) and Sing Me A Murder, both made well known when they were reprinted by the original Black Lizard imprint prior to its purchase by Vintage Books. Her short stories appeared regularly in Alfred Hitchcock's Mystery Magazine throughout the 1960s and she also wrote frequently for TV, notably two episodes for Perry Mason and several teleplays for both incarnations of Alfred Hitchcock's anthology series. Her story "Death Scene" as adapted by James Bridges for The Alfred Hitchcock Hour starred Vera Miles as a femme fatale mixed up with the chauffeur (James Farentino) for her Hollywood movie director father (John Carradine) and is one of the better episodes in the entire series. 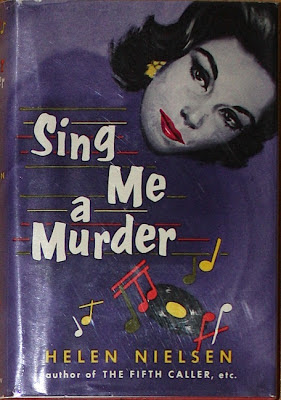