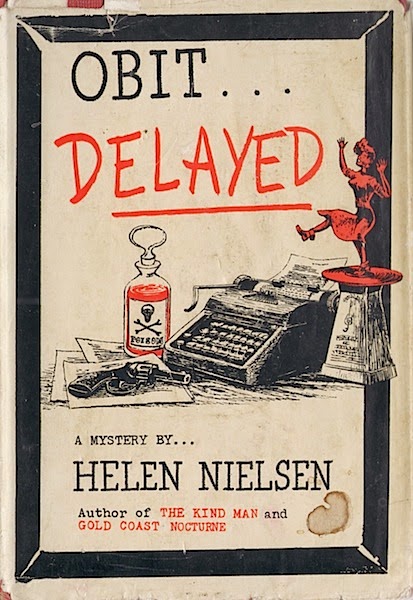 "Two forces. Interesting speculation indeed. But it had taken a small boy in search of a dog collar to identify the forces and uncover a crime."

Virginia Wales, a waitress in a hash joint in a California-Mexico border town, was a good time girl. Always looking for a laugh, an adventure, one of those "live life to the fullest" women who almost always land themselves in trouble at the expense of a good time. One night someone entered Virginia's hovel of an apartment and bludgeoned her to death with an award she won for jitterbug dancing back in 1937. An ugly crime, and an undeserving end for a woman who never really hurt anyone. But as Mitch Gorman says it was "[a] casual murder that didn't matter because it happened somewhere every night."

Helen Nielsen explores this tawdry, seemingly opportunistic, murder in Obit Delayed (1952), a story that begins as a domestic drama involving a lover's triangle gone wrong. It's a fine example of the detective novel as a character study of the victim. We get to know Virginia Wales, her troubling life masked by the veneer of an extroverted happy-go-lucky persona. She is still hung up on her ex-husband and keeps turning to him for help. But as the story progresses Mitch Gorman, a nice example of that detective novel mainstay the reporter sleuth, discovers that it's not Virginia's life that is the key to the solution of the murder.

Gorman is fascinated by the case. He uncovers a possible connection between Virginia's murder and a drug dealing gangster named Vince Costro. Dave Singer, Costro's lieutenant, had a relationship with the waitress but he is extremely upset over her death belying what he claims was only a casual friendship. Mitch thinks Singer knows who and why Virginia was killed but he's not talking to anyone. When another of Singer's girls, the garrulous gossipy lounge entertainer Rita Royale, turns up dead Mitch is certain the two women got in over their heads in some very nasty business. Business that Costro didn't want revealed. With the addition of these gangster characters the story enters new territory. 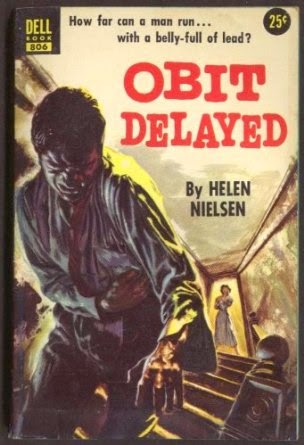 Deceptively familiar in its basic plot Obit Delayed is nevertheless a gripping, well told novel of non-discriminatory violence. Nielsen does an admirable job of describing how senseless murder, the fodder of tabloid journalism, can turn even the most cynical and skeptical reporter into a Nemesis of the hapless victim. Aided by society columnist Miss Atterbury (aka "the Duchess"), a smart-alecky colleague who would've been played by Eve Arden had this been a movie, Gorman devotes all his energy to turning a routine police case that might easily lay ignored on a sergeant's desk into a personal campaign for justice.

Multiple copies of the US first edition (Ives Washburn, 1952) and the Dell paperback published two years later will turn up in any internet book search and almost all copies are nicely affordable. The UK edition (Gollancz, 1953) is rather scarce. An eBook version is available from Prologue Books. If you are inclined to reading and collecting digital books I suggest you check out their website for a wide variety of vintage crime fiction. Why not start by acquainting yourself with Helen Nielsen's work? You're sure to come back for more after sampling this one.

This book serves as part of Rich Westwood's 1952 Crime Novel Reading Challenge for August and another book knocked off my Bingo card for Bev Hansen's year long Golden Age Reading Challenge.
Posted by J F Norris at 10:13 AM