I really don't know what to make of Thirteen Women (1932) by the eccentric stylist Tiffany Thayer. Is it a thriller? Is it a character study? Is it some kind of allegory on Fate? What I do know is it's tawdry, vulgar, lyrical, pulpy, poignant, disgusting, frustrating, infuriating, and utterly addictive. It's sort of the equivalent of driving by an utterly gruesome car wreck on the highway. You don't want to look, you know better. You, of course, are not a gawker or a rubbernecker. But when you get close enough you do slow down and you stare in horror and then look away, but you look back and you gape again. Then you move on. That's what it's like to read Thirteen Women. What can you say about a book that in the first chapter includes a dinner party scene in which the guests discuss a sex act that a depraved nanny performed on her charge and who ended up giving the boy a venereal disease? Of course it's all done in a sly innuendo type of writing, but it's just down right wrong, isn't it?

Thayer is not interested in making you comfortable as a reader. He wants you to squirm and recoil and shudder. He's a bit too obsessed with the nastiness and cruelty of life. He revels in pointing out his character's flaws -- their ignorance, their stupidity, their hedonism. The book is, I guess, meant to be a nihilistic view of the early years of depression era America told mostly from the viewpoint of female characters. But these women are merely symbols and puppets for Thayer's intensely cynical and fatalistic philosophies. Few of them resemble anything approaching a real person. The plot involves an absurd revenge plot decades in the making that stems from the villainess' life of abuse, neglect and bullying. She blames a group of schoolgirls for all her problems and vows vengeance on them all. She devises a ridiculous plan in which she creates the persona of an astrologer who sends letters to all the women in her past. The astrologer foretells death, suicide and disease for everyone.  And when the predictions start to come true one of the women sees not the power of superstition and Fate at work but a very real murder plot starting to unfold at the hands of a mad genius.

Illustrations from the 1st edition by David Berger

Laura Stanhope take her collection of letters to the police along with a packet of powder she received from the astrologer who goes by the preposterous name of Swami Yogadachi (a Japanese swami?). The powder was to be given to her son on his birthday according to the Swami's instructions and is meant to save the boy from a potentially fatal disease he predicts. Laura suspecting it harmful never did a thing but instead of disposing of it she saved it. For five months! She had to or else it wouldn't further the plot, right? The police have the powder analyzed and it turns out to be a highly poisonous compound usually intended as a pesticide for vermin. Thus begins the hunt for the murderous Swami Yogadachi and the search for the other recipients of his letters to prevent any further deaths. 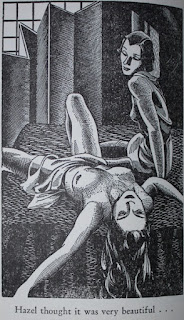 The story is a veritable Pandora's box of ills and pestilence released upon the reader. Murder, suicide, insanity, venereal disease, abortion, sex addiction -- it's all there in abundance. In keeping with the shock factor Thayer also includes a lesbian romance and makes it as tawdry and unattractive as one can imagine for a 1930s audience. Simultaneously making fun of the butch/femme stereotypes and also writing in such a manner as to titillate the easily aroused. It's not as tasteless as the sex addicted nanny story -- at times the relationship between Hazel and Martha is touchingly rendered -- but clearly the scenes are there for the reader who picked this book to be shocked.

Thirteen Women is told in a hodgepodge mess of letters, telegrams, newspaper articles, and author omniscient narration. We get to know the women through their own voices in their letters, but also through the condescending viewpoint of Thayer's narrator who at times is the author himself. Often Thayer steps into the story addressing the reader as "you" and giving his opinions of his characters as if they are real people ("You can't have Josephine Turner. Make up your mind to that. In the first place, I want her myself.") It's only one of the many unexpected parts of the book that make it a genuine head-scratcher yet strangely entertaining in a very offbeat way.

Tiffany Thayer's life, however, would make for a much more interesting book than any of his novels. There is a fascinating article here that goes into great detail about his beginnings as a writer, his friendship with Charles Fort, the origins of the Fortean Society which Thayer helped found, and his megalomaniac takeover of the society and its first magazine/newsletter Doubt. Someone should write a biography of the man. I'd read that with great interest. But as for further investigating the fiction of Tiffany Thayer I have had my fill after indulging myself in the pages of Thirteen Women.

This review was suggested to me by Curt Evans who has written about Tiffany Thayer's publisher Claude Kendall here. This week we chose to write about Thayer's bookend titles Thirteen Women and Thirteen Men. His review of Thirteen Men can be found at his blog The Passing Tramp.
Posted by J F Norris at 10:27 AM