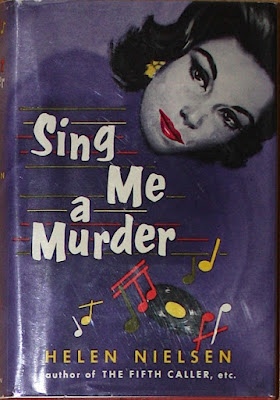 THE STORY: Shortly after his wife perishes in a house fire struggling playwright Ty Leander stages a fake suicide in the room of a murdered waitress to generate publicity. Then he announces he feels his life is so worthless that he intends to prove he was responsible for a death of the waitress. When it is later revealed that Ty's wife Julie, a well known jazz recording artist, and the waitress were look-alikes Ty turns sleuth and uncovers a wickedly nasty revenge plot.

THE CHARACTERS: Sing Me A Murder (1960) is a combination music and theater mystery. Nearly everyone in the case is involved in the entertainment industry in some way. There is an element of that heightened reality that pervades novels that take place in the artifice of the world of theater. Emotions are passionate, dialogue is rich with metaphoric expression, and behavior runs to the melodramatic. Mary Brownlee, the waitress whose murder trial serves as the background for the novel, was bludgeoned to death and her face burned with acid. She also happened to be wearing an outfit that was a replica of one Julie wore on the album cover of her latest record. An ex-boyfriend of Mary's is on trial accused of a crime of passion with Cole Riley, Ty's best friend, acting as his defense attorney. When Ty learns that Mary was a Doppelgänger for his singer wife Julie San Martin he begins to think that some kind of switcheroo might have happened. What if Mary is alive and the victim is really Julie? Ty is a troubled, mildly paranoid, man obsessively in love with his dead wife. He will do anything to make the circumstances of the house fire and Mary's murder fit into his private worldview. The more he digs into the past the more complicated it becomes.

Many of the characters do their best to extricate Ty from his fantasy world by alternately cajoling or chastising him to return to his writing. Marcus Anatole, Ty's agent; Alexis Draeger, a set designer who also designs houses on a commission basis; and even Cole Riley all do their best to counsel Ty against his foolish mucking up of the murder trial. Lt. Janus, however, is intrigued by some of Ty's insights and continues to investigate the murder of Mary Brownlee.

As usual there are minor characters who shine in Nielsen's work. Mary's landlord Mr. Gruenther is a portrait of a hot headed, narrow minded bigot. Mrs. Herbert is a comic kind of Glady Kravitz nosy busybody whose habit of spying on her neighbors Ty exploits. She also has a neat scene with Marcus Anatole who is sure she is holding back information in one of the pivotal moments at the end of the book. The two gas station attendants, Nick and Orin, have great moments too since Julie's car maintenance is crucial in finding out where she was on the night of the house fire. The monologue Orin Peters gives about his beagle and the living doll metaphor and how that relates to how men love is one of the highlights of the book. I'm always impressed when the real meat of a book and the most incisive dialogue comes from relatively minor and inconsequential characters. To me this rings true. I'm always being given advice and having important things pointed out to me by relative strangers and never the people who mean the most to me. Nielsen understands this often overlooked bit of real life brilliantly including in all of her books. 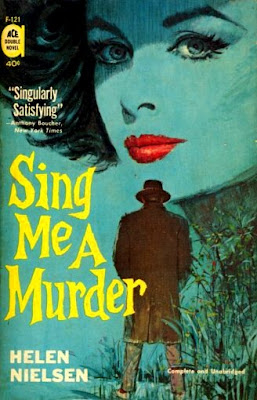 INNOVATIONS: The plot itself I think is highly original. I've never encountered a story with a attempted suicide that was arranged in order to implicate the suicide in a murder he didn't commit. Nielsen never ceases to amaze me in how she shakes up the genre with new angles and inventive ways for characters to turn sleuth.

I also was very intrigued by the idea of the haunted man motif in Sing Me A Murder. Janus tells Ty "Rooms are never haunted, Mr. Leander--only people" and Nielsen makes the most of this piquant observation throughout the novel. Ty is desperate to believe that Julie is still alive and nearly everything that happens in the book tends to reinforce his stubborn refusal to accept her death. In scene after scene, her music plays continuously on the records she made. Her image shows up repeatedly. Her clothes mysteriously reappear in her closet when they should've been burned in the fire.

THINGS I LEARNED: A major plot point involves an oil change and the mileage on Julie's Ferrari. I learned all sorts of things about the way gas stations are run in 1960. For instance Nielsen writes that a gas station attendant was "resettting one of the automatic pumps" when Ty pulls in to talk to him. Then the same attendant "writes up a service ticket" for a filling up his tank and cleaning his windshield. Credit card slips are featured in the plot as well as one of the major clues. I can still remember when we had to present our card and have it run through that sliding machine in order to get an impression of the number on the carbon copy. I guess the "service ticket" was actually the credit card slip. Also an oil change sticker is found on the hinge side of the car's body and not on the door where it is normally found leading Ty to realize that the oil change was done in a place other than their regular service station.

1960 CULTURE: Ty and Julie's home in Malibu Canyon is described in great detail. It was one of the many custom built houses designed by Alex Draeger who specializes in eco-friendly home design. Not only does Alex use natural materials in the construction of the house she takes advantage of the natural surroundings as part of the overall design.

When asked about the kinds of records played in Mary's apartment, Herman Gruenther says he can't tell the difference. "They sounded the same... All this new music sounds the same to me. Somebody bangs some kettles, and somebody else blows a horn, and some female moans."

QUOTES:  "There's hatred beyond fear; a hatred beyond love. There's the eye of the hurricane in us all, the quiet place where the storm ceases and the only reality left is the one thought--kill. We all kill, in one way or another, those who refuse to love us."

Marcus Anatole, the cynic of the book: "Love? What is love? A form of egotism. Ty's lost a mirror he was fond of gazing into to admire his own reflection." 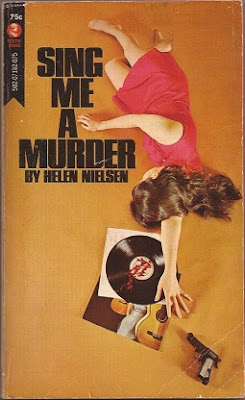 Lt. Janus pops peppermint candies into his mouth periodically to cover his bad breath. He tells Ty: "Wife's order. 'Too much smoking,' she said. She's right, too. That's the trouble with having a nagging wife, they're nearly always right."

EASY TO FIND? Ample copies available for sale in the used book market. In addition to the original US and UK hardcover editions, there are three paperback reprints and a Detective Book Club three-in-one volume which also includes The Ferguson Affair by Ross Macdonald and Murder After a Fashion by Spencer Dean. The most recent reprint of Sing Me a Murder was in 1988 as part of the series of reissued crime novels published by Black Lizard. Though Prologue Books has released several of Nielsen's crime novels in digital editions Sing Me A Murder is not among them. Sorry eBook fans. But happy hunting to all the rest of you!
Posted by J F Norris at 11:24 AM