FFB: The Woman on the Roof - Helen Nielsen 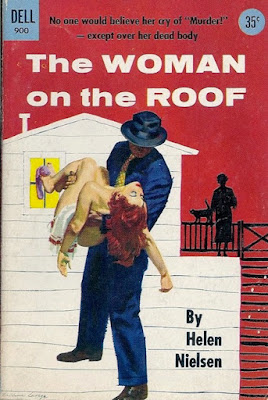 THE STORY: Wilma Rathjen is The Woman on the Roof (1954). She spends a lot of time watching her neighbors from her rooftop apartment that overlooks the courtyard building next door. One night while spying through their open, well lit windows she sees a dead woman in a bathtub but says nothing about it to anyone. Instead through her rash actions she unwittingly implicates herself in what turns out to be a murder set up to look like a terrible accident. When Wilma is targeted by the killer who thinks she knows too much Wilma flees making more foolish decisions and endangering others.

THE CHARACTERS: The viewpoints switch between Wilma and John Osgood, a police sergeant investigating the death of Jeri Lynn, an exotic dancer and would-be actress who was electrocuted in her bathtub. Told in the third person we get to know the intimate thoughts of only Osgood and Wilma. Their perceptions of the case vary wildly since Wilma is introduced as a paranoid neurotic from the very first page. Osgood eventually comes to see that what others interpret as the ravings of a "madwoman" are in fact truthful events but told to the police in such a hysterical fashion that she seems to be completely delusional if not guilty of the crime herself. The scenes with Wilma and Osgood alone are penetrating and we see that Wilma is hardly unbalanced but rather sharp witted and keenly observant. It's only her past that continues to haunt her and colors everything that could possibly be seen as threatening to her. The real pull of the story is in following Osgood's slow realization that everything that Wilma has done and everything she has seen and told him are not delusions but a slanted truth of sorts. She is holding back some key information and once he can get her to feel comfortable enough to tell all he knows he can solve the case. Yet at every turn in this often complex and highly suspenseful story Osgood is hindered by a killer who takes advantage of chance and coincidence and Wilma's mental imbalance.

The supporting players are a cross section of working class California and wanna-be entertainers. Nielsen knows this side of the Hollywood outskirts and the losers and dreamers very well. There are two show girls who act like the typical Hollywood starlets heightening mundane moments with melodramatic speech, a drop dead gorgeous hunk who likes to wash his sports car wearing nothing but his tight yellow swimming trunks, a has-been saloon singer who tries to befriend Wilma, the blowsy outspoken woman who runs a strip club, and the nosy ancient handyman who conveniently has keys to everyone's apartment and who can't help but do a little spying and sleuthing on his own.

INNOVATIONS: The Woman on the Roof is a rare example of a writer using a mentally ill character as a protagonist and not really caring if that lead role comes off as sympathetic. Still, Nielsen does an admirable job of presenting an obviously deeply troubled and neurotic woman well aware of her fears and paranoia and not turning her into the typical nut job you find in crime fiction of this era. Initially it's hard to like Wilma for all the seemingly ludicrous things she does but we do come to feel how trapped she feels. Sympathy does not come easy from Nielsen's pen but eases out over the course of the story. Her handling of Wilma's incarceration in a sanitarium at the hands of her brother sends mixed messages for most of the book. Was it the best choice or merely an easy way out for her often indifferent brother? Curtis Rathjen is more concerned about his public image as a rising star in real estate business and a possible political career than his sister's welfare. The role that Osgood plays, however, in teaching others about how to handle Wilma is perhaps her master touch in The Woman on the Roof.

Osgood comes to understand that seeing the crime through Wilma's skewed perception and trying his best to step into her shoes rather than dismissing everything she says as "crazy" is the key to finding the person responsible for the murder of Jeri Lynn and all the other crimes committed. Osgood not only learns a lot about his own prejudices about mentally ill people he comes to be Wilma's only friend in the book. In the course of this self-discovery of sorts he also manages to teach his police colleagues a thing or two about compassion and the role of witnesses despite preconceived notions of their fantasies or lies. This is one of the better crime novels I've ever read in how it deals with mental illness and the fear that tends to ruin the lives of those afflicted with alternate perceptions and misaligned realities. 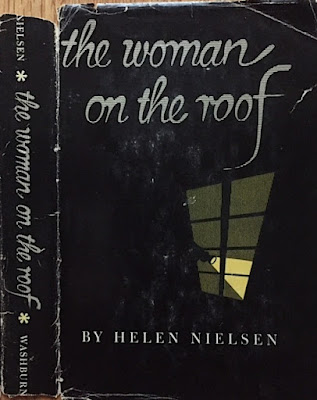 QUOTES: There was no mistaking Curtis' step--quick and firm as if each one cost good money and he was determined to get full value for every expenditure.


Wilma Rathjen looked normal enough, neat, simply dressed, certainly not like the obvious characters who could be seen any day parading the streets like a road company of The Snake Pit.


Wilma tried to stand tall and proud, but there wasn't enough of her to stand tall, and she looked about as proud as a Christmas tree on the day after New Year's.


"He's got the breath of a baby, providing the baby smokes cheap cigars."


Maybe [Wilma] was as guilty as the evidence indicated. Maybe she was crazy enough to keep in a cage and he wasn't far behind, but some of those questions would have to be answered before he could be sure. Even a crazy woman deserved that much of a chance.


When Wilma walked into the room Osgood felt sick. He'd seen women in the same condition thousands of time, but not this woman. Not a woman so fastidious in her dress and conduct, and so pitifully proud of her furniture and her [china] cups. In the forty-eight hours since he'd seen her last the woman seemed to have matriculated from hell.


Maybe he couldn't square the world, but he could at least square himself. Living was a private enterprise anyway; a man could break his neck trying to see which way the crowd went.


"Insane is a pretty strong term , Mr. Rathjen. If you had my job you'd stop thinking of your sister as a freak. This city is crawling with frightened people just like her. Maybe they've lost a loved one and can't get used to being alone; maybe they've just committed the terrible sin of getting old and unemployable. One way or the other, they're left with a lot of time on their hands and too many scare artists screaming in their ears."

THE AUTHOR: For more on Helen Nielsen and her crime fiction see my previous reviews of The Kind Man and Obit Delayed. Also check out Curt Evans' review of Gold Coast Nocturne, reprinted under the title Dead on the Level.

EASY TO FIND? The paperback edition pictured at the top of this post seems to be very common in the used book trade and offered at mostly affordable prices. The hardcover editions, both US and UK, are much more scarce. While I was reading this I made a trip to Omaha and visited Jackson Street Books for the first time. An amazing store that reminded me of the best of the old and now gone antiquarian bookstores in Chicago. In my poring over their mystery fiction shelves I found a first edition with the very scarce DJ of The Woman on the Roof . Of course I bought it. At only $12.50 it was practically a steal. That's how I managed to have two illustrations for this post. Proving that the constant search for vintage crime fiction often turns up a serendipitous find when you least expect it.

This is my second of several 1954 books and stories I read for this month's Crime of the Century meme hosted by Rich Westwood at Past Offenses.
Posted by J F Norris at 10:03 AM