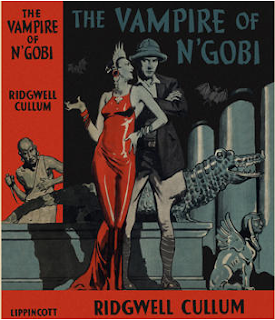 Through a ridiculously baroque method that involves subterfuge, pickpocketing and mistaken murder an African adventurer is sent a map so that he can find the most direct route to a lost city hidden outside of Zimbabwe. It appears that a queen who claims to be a reincarnation of an ancient sorceress wants the adventurer to be her mate and co-ruler. The actual journey to the city is the most interesting part of this book. The adventurer is accompanied by a Cockney cohort and a Bantu who wants nothing more than to kill as many “yellow men” as he can. A trip through an underground river leads them to the Gorge of White Death where they discover a forest of carnivorous trees or a man-eating fungus. It’s never really explained what they are. When he finally arrives in the city he is greeted by Queen Ramaanita who drives him (yes, they have cars and electricity in this lost city) to another hidden cave where the ruins of a human sacrifice amphitheater are located.

These are really the only interesting incidents in the book. There is no supernatural element and the “vampire” of the title is meant in the “dangerously seductive woman” manner. A deus ex machina finale culminating in three outrageous incidents -- one of them being a last minute rescue of the hero by a squadron of airplanes from the Rhodesian police force -- leaves the reader exhausted and unsatisfied.

Cullum is better known for his western novels none of which I have read. His style takes some getting used to, it's densely verbose with tangential or parenthetical comments interrupting the flow. About one third of the book is nothing more than exposition. No editor would stand for that kind of writing these days! The book as a whole is very episodic and overly done. For example: several extraneous characters are introduced early on, do their thing, and then never appear again. The real adventure, the real story for the search of the lost city, does not occur until well into the halfway mark of the book.

The Vampire of N'Gobi (1936) is a rather difficult title to find these days. As is usual with scarce titles the copies being offered online are expensive. The cheapest I found was $50 and seemed to be in collectable condition. In my opinion, though it's not really worth tracking down. The story is intermittently interesting however, with the exception of the fantastical elements mentioned above, rather run-of-the-mill. But that is one heckuva DJ, isn't it? Looks to be the same artist who did the covers for all the lost race books by Mark Channing that Lippincott published in the late 1930s.
Posted by J F Norris at 9:45 AM