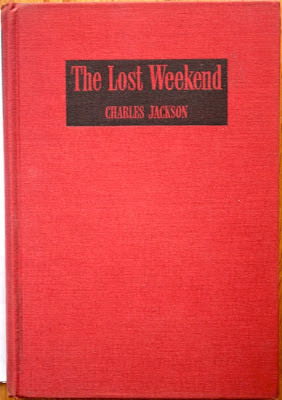 I don't have many author signed books as I tend to sell them as quickly as I acquire them, but this one I will be keeping for a very long time. I still remember how I came across it, too. Joe and I were book hunting one weekend, making our way through the western suburbs, and stopped in at a Frugal Muse store in Darien, IL. Next door to the main store they were having a $1 book sale. We found a few old mysteries but also this astounding book signed by the author.

On the back wall stuffed in among a bunch of modern books, there was this copy of The Lost Weekend (1944) by Charles Jackson. It turned out to be a first edition. On the inside there was a bookplate with the author's name and an inscription from the author. All that for $1! How could anyone resist such a find?

The Lost Weekend as many of movie fans know is the basis for a groundbreaking film about the horrors of alcoholism. It starred Ray Milland as the tortured drinker and was nominated for a seven Academy Awards winning Best Picture, Best Actor, Best Screenplay and Best Director.

It was also Charles Jackson's first novel. The book catapulted him into the forefront of the literati. In his relatively brief writing career from 1944 to 1967 he wrote numerous short stories collected in three volumes and three other novels, one of them the story of a man who falls in love with a young Marine -- The Fall of Valor -- another groundbreaking book about a touchy, if not completely taboo, topic for his era. Jackson never topped the success of his debut novel though. 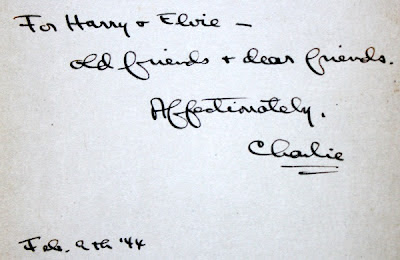 Dogged research proved the above signature to be authentic. But my scouring of biographies and articles about Jackson's life failed to turn up any clues about exactly who Harry and Elvie were or where they lived. At the time the book was inscribed Jackson was living in New Hampshire after a brief stay in Hollywood while the movie was being made. Books travel as much as people do. Harry and Elvie could have been living anywhere. Interesting that the book appeared to be his own as it also has his bookplate which is starting to lift off of the front endpaper.


Side by side comparison of the author and his bookplate shows a strange similarity.  Was it intentional to make Jackson appear to be Shakespeare? Or am I reading too much into that?

A fairly accurate brief biography of Jackson's life appears on this Wikipedia page.  He had a life just as unhappy and tortured as his fictional protagonists.
Posted by J F Norris at 10:55 AM