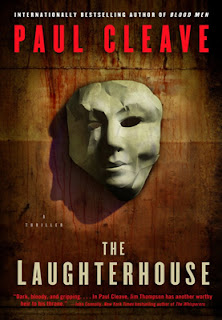 What do you get when you cross a serial killer novel with a spree killer novel? Oh, you think they're the same thing? Don't tell that to Paul Cleave who would like you to believe that they are not. His latest thriller The Laughterhouse is supposedly about a spree killer, but his murderer on the loose behaves exactly like your stock serial killer plucked from the pages of any contemporary thriller written in the last fifteen years. In all honesty I expected to loathe this book. I didn't. But I didn't love it either.

First off, the book has been stripped of all it's New Zealand color for an American audience. What is normally called the boot of a car has been changed to trunk, the bonnet of a car is now a hood. This kind of dumbing down irks me. The characters even refer to their money as bucks! I know the Kiwi currency is the dollar but do they really use American slang? There isn't anything in my edition that gives me a sense of Christchurch at all. The diner is even a ripoff of American culture as is the food. It was very strange. Was that part of Cleave's idea in this book. That New Zealand is no different than our crime ridden vulgar pop culture obsessed U S of A? No. Turns out  there is another culprit. A quick email to Paul Cleave verified the changes were made at the insistence of his American publisher.  Why am I not surprised?

What I do like is Cleave's unabashed, in your face, grisly descriptions of violence. He doesn’t hold back and he doesn't play favorites among his characters. If you're going to write a book like this you can't censor yourself or treat it palatably. I also like his sardonic sense of humor. But does everyone in the book have to exhibit that humor? After a while everyone started to sound the same. Even an 11 year old girl turns smart ass when she calls the murderer a "perv" and insults him like a cynical 20-something with lines like this one to her 8 year-old sister: "Deluded. See, Katy. I struck a nerve." It's a little too much to expect from even the most precocious child to be that sassy in the face of a man who has just bound her and is planning to stab her multiple times.

This book is like a soup made from every leftover in the refrigerator of a lazy cook. Chop it up, throw it in, stir it up, let simmer for over 400 pages. A little goes a long way, my friends.

Apart from the serial/spree killer there's series character Theo Tate, an ex-cop turned private eye trying to get over a "personal tragedy." I haven't read any of the other books that came before this but it didn't matter. One book's entire plot is discussed at length including giving away the ending so I felt like I've read at least two of Cleaves' books now. In addition, there is the ego-maniacal psychic Jonas Jones who wants to collaborate with the police. Through utterly contrived plot mechanics the killer also consults psychics on a regular basis hoping that one day he'll meet someone with genuine paranormal abilities. Sometimes the book with everything is a taste sensation, but in this case it's just flavor overload. 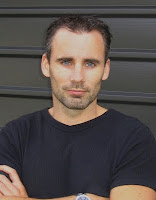 And so I have to ask – why? This subgenre has truly been exhausted. We already have a serial killer who is in love with her policeman nemesis (the books of Chelsea Cain) and a serial killer who kills criminals who have escaped the law (Dexter) among the many hundreds of variations, each one usually labeled "daring" and "original"by fawning critics. Is writing about a spree killer any more original? Especially one who doesn’t behave like a genuine spree killer but instead behaves like a stock fictional serial killer. And after what happened in Colorado at the Batman premiere can anyone truly say that crime fiction about spree killing is a legitimate form of entertainment?

There is an audience for this kind of book but more and more I am discovering that I do not count myself among these readers. The combination of excess, gross-out violence and the pop psychology pat answers to a killer's behavior have really worn out their welcome with me.
Posted by J F Norris at 11:31 AM