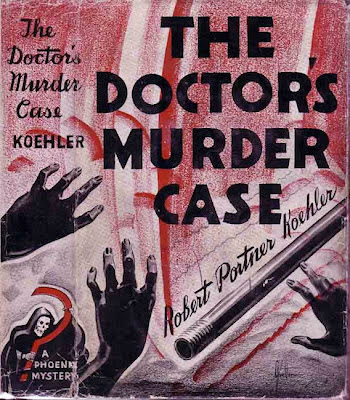 Another installment in my continuing series on alternative genre mystery writers -- those oddballs who try their damnedest to stump their readers with legitimate detective novels or try to spook and scare their readers with terrifying horror but often bungle in their attempts. Yet they persevere! And amazingly continue to be published, more often than not by second or third string publishing houses. Today I honor Robert Portner Koehler, one of the many writers from that diehard house of unintentional detective story hilarity -- Phoenix Press.

A more boring title could not have been slapped on this intriguing effort than The Doctor's Murder Case (1939). And it cheats the reader, too. The doctor is merely the narrator; it's not his case to solve. The subject matter rather than the narrator should've been celebrated in the title. The chapter titles are far more evocative of the true content of this typically convoluted Phoenix Press mystery. Try these on for size: "The Poltergeist", "The Devil Comes to Leams", "Death of a Witch", "Dark Necromancy", "The Passing of the Witch's Devil", and "Wizardry's Last Stroke." Any of those chapter titles would've been deserving for the book's title. You'd think that this book has all the makings of a John Dickson Carr or Gladys Mitchell mystery. Well, not quite.

Narrated by the fairly colorless Dr. Garrison who is treating an invalid spinster in the rural Massachusetts town of Leams the story is about the freakish bludgeoning death of Judy Priest (I know!), a local woman thought to be a witch. There are a few elements to the unusual murder that almost make it a true impossible crime novel. Arnold Grant, the crazed sexton, has been holding secret meetings of his cult group in a nearby barn. He's been whipping up some of the weak-minded ignoramuses of the town into a religious hysteria. Among his several pet topics is Judy Priest who he denounces as a witch because she happens to practice herbal medicine.

One night he gets his group so riled up that they head to Judy's house and start shouting at her and throwing stones at her house. She won't come out. Would you? Then a hysterical maid curses Judy and they hear a horrible scream inside the house. When they break into the house through a window they find that Judy has been struck down and killed. Was it a supernaturally caused death? Or did someone from the group manage to find a way into the locked house? Police questioning reveals that no one seemed to have left the group throughout their taunting.

Lieutenant Carson is the police detective who handles the case. He has a few odd detection methods (a Phoenix Press detective novel staple), one of which is paying close attention to slips in grammar:


"I warn you now, Lieutenant, wild horses won't drag that person's name out of me."
"Oh, it's a woman, is it?"
I showed my surprise.
"Don't avoid a pronoun, if you want to hide a person's sex. If it had been a man, you would have said his name without hesitating. Now, wouldn't you?"

As the investigation proceeds all manner of the supernatural, whether it be witchcraft or curses or poltergeist behavior, evaporates. The story focuses on Judy's long dead child and a possible connection with a kidnapping of years ago. What starts out as a creepy tale with Gothic atmosphere, freaky characters, madness and paranoia, ghoulish graveyard scenes, and talk of the criminal mind that reminded me of similar lectures in the work of Charles Dutton devolves into a pedestrian mystery with a kooky, "deep dark secret" lifted from a Brothers Grimm fairy tale. That is, if the Grimms had been writing while under the influence of a hallucinogenic drug. A second murder involving a bottle of beer that was somehow poisoned while remaining capped offers a second near impossible problem until the solution is propounded, one that is even more lame than the puzzle of how Judy was killed in her locked house.

The detection is mostly good, but towards the end it becomes laborious and confusing.  It's a shame that the story begins with such promise and ends up where it does. Koehler tries his best but just can't deliver a smashing ending without resorting to implausible motivations and moronic actions that only come from the minds of bad characters in hastily written detective novels.

The Doctor's Murder Case is Koehler's third novel.  He would go on to write an even dozen more mystery novels even branching out to create three series characters who appear in a trilogy of books each.  I have one more Koehler novel to try out, his sixth with series character Pecos Appleby and set in New Mexico.  I'll be reporting back on whether he manages to improve. I'm not too hopeful.
Posted by J F Norris at 8:20 PM