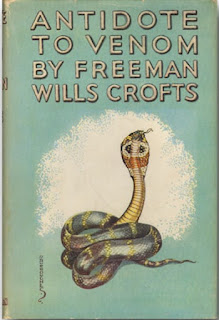 I wonder how many vintage mystery readers out there are like me and read every page of a book. I mean every single page, my friends. I read the dedications and make notes of odd messages then do research on the mystery men and women mentioned. I read the copyright pages looking for unusual notations. And I always read author notes and prefaces. If I didn't I would never have known that Antidote to Venom (1938) was Crofts' "two-fold experiment" in crime fiction. In his own words "...it is an attempt to combine the direct and inverted types of detective story and second, an effort to tell a story of crime positively." Curious that second part, don't you think? I think he succeeds even if it comes about in the most manipulative fashion.

First, a crash course on terminology. The inverted detective novel is a departure from the traditional whodunit which focuses on the murderer and his motive. Instead of the murderer's identity being kept hidden until the final chapter we know the murderer from the onset and are privy to all his thoughts and plans. The suspense comes in following the detective as he tries to uncover the fatal mistake that upsets the apparently perfect crime presented to the reader through the murderer's point of view. R. Austin Freeman and his detective Dr.Thorndyke were the models of this subgenre during the Golden Age. The TV show Columbo has become the modern day equivalent and is how almost everyone has become familiar with this version of the "howdunit" or perhaps more accurately "howdhescrewup." 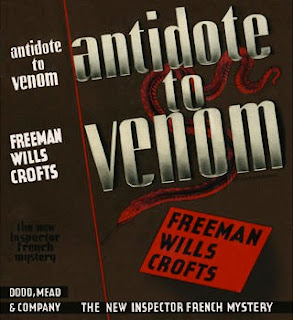 George Surridge finds himself trapped in a loveless marriage. He finds his only joy at work in his busy life as director of the Birmington Corporation Zoo. But he is in deep financial straits. His wife Clarissa has been living well beyond their means and George has kept secret from her his gambling problem. He owes an awful lot of money to debtors. But then there is his ailing aunt and her modest estate. If only she would die soon he could have about £8000 that would more than cover his debts and allow he and Clarissa to live comfortably again. George begins to daydream of murder plots.

One day he meets Nancy and a pleasant day of chit chat and an impromptu tour behind the scenes at the zoo soon leads to secret trysts at country inns and teashops. Before they know it the two are engaged in a full blown romance. George's criminal thoughts about murdering his aunt are displaced by his deceitful cover-up of his secret love life.

When his aunt's illness worsens leading to her death George finally thinks the legacy due him will solve all his problems. But he learns from his aunt's lawyer, David Capper, that the money is gone. The lawyer admits he stole from the woman to cover some bad investments. There is nothing left. The two of them are in similar predicaments, each needing to pay back debts with expediency. But there is another option - Capper's rich uncle. Coincidentally, this rich uncle also happens to be Professor Burnaby who was working with George in obtaining snake venom for use in his medical research. The lawyer proposes a murder by proxy scheme that will provide each of them with money they need. George will need to do four things one of which involves the deadly Russell's viper at the zoo. He will be clear of any possible guilt as he will have no motive for the death of the professor. Capper assures George he will also have an alibi the night of the murder. Driven to desperation and thinking he will be in the clear George agrees to become an accomplice to the murder.

The rest of the book details the amazing detective skills of Inspector French and the local police. At first the death of Professor Burnaby is seen as a freak accident. The snake appeared to have escaped through negligence on the part of the zookeeping staff. It also helps Surridge that a keeper had recently been let go for dereliction of duty. The local police see the snake theft as a mad revenge scheme gone wrong and look to the fired zookeeper as suspect number one. George of course is sweating bullets throughout the entire investigation. French suspects something more serious than a mere accident. Too many things seem too coincidental. Above all he is bothered by one thing: how did the snake bite the professor and then end up drowned in a rain barrel that was yards away from the body? French demands not only an autopsy of the professor's body but one for the snake.


I haven't had much luck with finding books by Freeman Wills Crofts that were exciting or engaging. He is primarily known for detective novels in which trains and boats and their timetables are examined and studied ad nauseum as part of the murder investigation. I have been bored by a lot of them and never finished those. Luckily, there isn't a train table in sight in this book. And for once with Crofts I was completely caught up in his story. George is both an object of pity and fascination. As presented his criminal thoughts and philandering ways are completely understandable. He is shocked by his actions and yet cannot stop himself. It's a fine examples of a character who is completely human falling victim to inexplicable desires and wholly succumbing to them transforming into a person he never thought he'd ever become. For a writer often derided for his shallow characterizations I think Crofts pulled off one of the most difficult jobs in crime fiction -- a compelling portrait of a sympathetic murderer. 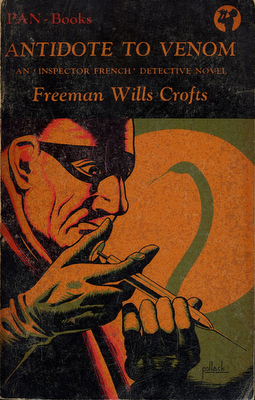 While there are some convenient inspirational moments and leaps of imagination in French's mulling over the oddities of the crime the real detection in the book outweighs those minor quibbles. Much of the best detective work is in French's research about the snake and the examination of a workroom of one of the suspects. I liked all of the zoo background which is most likely authentic based on Crofts' acknowledgments to a herpetologist who helped him with research.

The murder method alone is one of the most astonishing and bizarre deathtraps of this period in detective fiction.  It puts to shame the mechanical ingenuity of the gizmo in Fatal Descent by Carr and Rhode, a machine I still cannot understand. I think Crofts can be proud of this thoroughly diabolical and unfathomably constructed device for killing someone.  Even with a detailed schematic I couldn't see how anyone could dream it up - let alone build it and make it work. I imagine John Rhode letting loose with an impressive whistle when he read this book seventy plus years ago.

And about that bit about Crofts' "an effort to tell a story of crime positively"? I can't really give it all away. Let me just say it all has to do with guilt and justice and, oddly enough, an eleventh hour moment of prayer perfectly placed to achieve Crofts' desired effect. To me it seemed too pat and neat. It was an ending manipulated through coincidence and contrivance. A story of a crime positively told? Perhaps, but better to have labeled it the story of a crime with a moral lesson.
Posted by J F Norris at 12:00 AM