A murderer confesses his crime to a priest who is deeply troubled by what he hears and decides to find out who the confessor is and what exactly happened. Sounds a bit like that Montgomery Clift/Alfred Hitchcock movie, doesn't it? But it's the basic plot of Dorothy Salisbury Davis' third novel A Gentle Murderer (1951), yet another under-appreciated cornerstone in crime fiction. While it still clings to the basics of a detective novel Davis is more interested in the effect of the crime on the characters.

Father Duffy is almost as conflicted as the haunted young man who confesses his crime. He wants the unknown man to go to the police, promises he will visit him and help him make right of what is clearly sinful. Only when the priest learns of a bludgeoning death of a prostitute, coincidentally one of his parishioners, does he realize that the killer may have been the anonymous young man in his confessional. After all, there was all that obsessive talk of a hammer that disturbed the priest. Father Duffy turns sleuth and aims to learn as much as he can about the victim. In doing so he eventually learns the identity of the young man confessor and why he committed such a brutal crime.

The novel is built around the framework of a detective novel with a simultaneous police investigation playing out as Father Duffy does his more humanistic detective work. Occasionally the two stories meet and priest and lieutenant share with each other what they have learned. All the while the emphasis is always on character and behavior and not the plot or the crime. 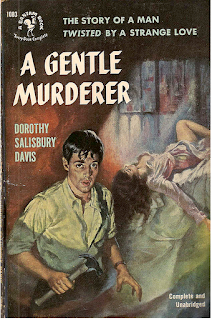 Davis' strength is in character work, especially women like Mrs. Galli and her daughter Kate, and a masterful replication of the Irish voice. Her own background as the daughter of Irish immigrants reveals itself in the many Irish Catholic characters and their unique manner of speaking. In addition to following the thoughts and actions of Father Duffy, Lt. Holden, and Sgt. Goldberg, Davis gives us a third point of view -- that of Tim Brandon. As with nearly every modern crime novel on our shelves today we get Tim's entire back story which slowly uncovers the reasons he has become a killer. It is this unusual triple point of view narrative and the focus on character rather than plot that makes A Gentle Murderer a stand out in the evolution of the crime novel. No surprise then that it appears on the Haycraft-Queen Cornerstone, a list of notable detective novels of the 20th century.

Some of the psychology is perhaps too Freudian for a modern reader's tastes, but nonetheless there is a sophistication in the presentation of a man whose dysfunctional homelife leads him to a life of crime. It is sympathetic portrait Davis paints and never with lurid colors.
Posted by J F Norris at 11:56 PM