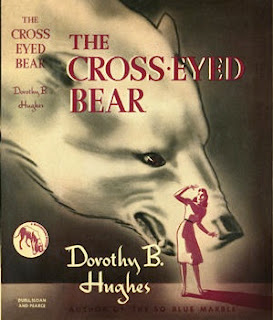 Much has been written about Dorothy B. Hughes, one time poet, mystery writer and champion book reviewer, but usually with an emphasis on the same two books over and over. Like Christianna Brand who for decades was only known for Green for Danger, you would think Hughes wrote only those two books (Ride the Pink Horse and In a Lonely Place) both of which like Green for Danger were adapted into exceptional crime movies. Is it the movies that have overshadowed her other work?

Though her overall output totals less than fifteen novels, she has a rich and varied body of work in which she played with many of the tropes of the detective novel mixing and blending them with other subgenres (the espionage tale, the woman in peril tale, the pursuit thriller) to come up with a kind of specialty tale of terror that would be her trademark. As the reviewer for the Chicago Sun once wrote: "Mrs. Hughes is...capable of making terror rise out of a sentence which, from any other writer, would seem innocuous." One of her most overlooked books is her second novel, The Cross-Eyed Bear (1940), an intriguing, exceptionally suspenseful, amalgamation of the whodunnit and the woman in peril thriller.

Lizanne Steffasson is hiding under an alias. She has travelled to New York to find the murderer of someone in her past. Through a chance encounter in a theater she overhears mention of a newspaper ad in connection with the Lorenzo Hotel. Later that night she finds what she believes to be the ad in question:


Wanted: A beautiful girl. One not afraid to look on
danger's bright face. Room 1000, The Lorenzo. 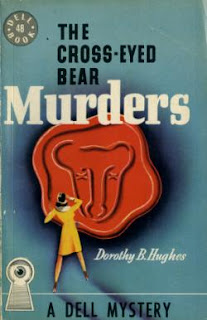 Fully aware that she is far from beautiful, Lizanne nonetheless dolls herself up transforming herself into a fair semblance of a glamor girl and applies for the job. To her astonishment after only a few probing questions she is almost immediately hired. And phase two of her plan can be put into operation.

Her new employer, Bill Folker, is a lawyer who works for a man that Lizanne also secretly knows -- Stefan Viljaas, the eldest son of Knut Viljaas, known by his less than complimentary nickname the "cross-eyed bear". During the course of the interview Folker tells a story that seems like something out a book of fairy tales or a Shakespearean romance. Viljaas, a Finnish billionaire, had three sons all of whom he despised. When he died he left to those sons his estate in the form of a single check along with some very strange rules on how the fortune was to be distributed:


...to them the father left three million dollars, unbelievably in cash. [...] The legacy was given in the form of a check, divided into three triangles, one for each son. This check could not be cashed until the twenty-first birthday of the youngest son, and only if the three sections were presented together. Each triangle contains not the son's name but Old Viljaas' seal of the cross-eyed bear. Furthermore, the check must be endorsed in triplicate with the cross-eyed bear.

Shortly before his twenty-first birthday the youngest son, Dene, disappeared while on a hunting trip never to be heard from again. Murder was suspected but no body was ever found. The seal with the cross-eyed bear was thought to be in his possession also seemed to vanish. Neither could be found his triangular portion of the check. As stipulated in the will the check must be cashed by April 1. If not, the entire fortune will go to a group of "fool societies that the Old Bear favored." Lizanne is hired to help find the missing sons, Dene and Lans, recover the missing check pieces, and learn who is in possession of the all important seal with the cross-eyed bear. 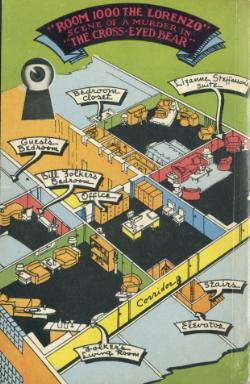 It is this wild "Mission: Impossible" task that takes Lizanne on a terrifying journey into a world of greed, deceit, betrayal and murder. All the while the reader is privy to all of Lizanne's secrets, cleverly and surprisingly revealed as she navigates her way through an alternative Manhattan in which no one is to be trusted. She finds herself involving innocent neighbors, implicating herself in the mysterious murder of her predecessor, and playing numerous roles with the men she meets. Though ostensibly in the employ of Folker we soon learn that she too has her own personal reasons for finding and assembling all three pieces of the highly sought after check.

Revealing anything further of this densely packed story would rob any reader of the full pleasure of its unusual, truly original story. It's odd and fantastical like her first novel The So Blue Marble (1940) which had an element of the supernatural. It's suspenseful as any Hitchcock movie and deftly constructed. And above all, it's intelligently written with a cast of original characters led by the strong-willed, complicated and realistically flawed Lizanne.

In only her second outing Hughes proved herself to be a contender in crime fiction with the promise of great things to come. She would more than live up to her promise in the even dozen books that followed over the next two decades. 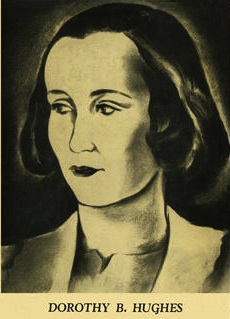