"Love's not all that beautiful. It's a grotesque business."
-- Gervais Larauch from The Prisoner 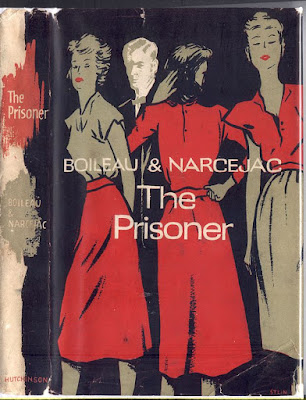 Sometimes I come across a crime fiction book that has so much going for it that I am hesitant to talk about its content yet feel compelled to bring it to the attention of those who have been unlucky enough not to have heard of it. In the case of The Prisoner (originally published in 1955 as Les Louves in French) by Pierre Boileau and Thomas Narcejac I have found such a book. And here is something unique for me -- I will not give even a smidgen of a plot summary. Here is one of those rare books that should be read without any prior knowledge of what happens. The DJ jacket mentions only that the two men in the opening pages have just escaped from a German prisoner of war camp in occupied France. Wisely it goes no further. Neither will I.

From the opening page with the slickly engineered prison escape via cargo truck to the final chilling paragraph the reader is in for a wild ride. It seems to have covered well worn territory with its duplicitous lovers and an impostor motif yet the authors managed to surprise me no less than three times. Just as I think I can outguess Boileau & Narcejac they prove me wrong again and again. If you are familiar with Vertigo and Les Diaboliques, two famous movies based on two of their early novels, then you know the kind of web of deceit these masters are so adept at spinning. The Prisoner easily ranks as the third jewel in a supreme triumvirate of their best crime thrillers. Each of the three make up their crowning achievements – little masterpieces of macabre suspense. 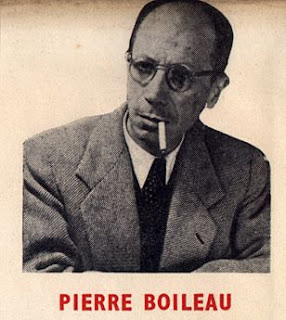 The Prisoner too has been turned into a movie and retitled Demoniac (1957). According to the imdb.com listing it stars François Périer and Jeanne Moreau - two classic French screen actors. It also happens to be one of the few films for which Boileau wrote the screenplay so it's sure to be very faithful to the story. I only wish it were available on DVD. I could not even find one clip on the various video websites that more and more are turning up scenes and entire versions of obscure movies like this.  I think that this particular book would even work on stage as a claustrophobic thriller. With a cast of only four people and a single set it would be also be easy to produce.

I will tempt you further with these tantalizing morsels: that superstition plays a heavy role in the proceedings, and that the narrator of the story is equal parts victim and culprit. There is one scene of ruthless cruelty in particular that took my breath away. The title, too, is metaphorically fitting. I cannot resist including this one passage as an example of the recurring motif of imprisonment:


[S]hould I go, should I stay. I began to realize that the danger was much the same in either case. If I made off, Hélène would soon guess why; it was the surest way to awake her suspicions. If I stayed, I was at the mercy of one false step, one thoughtless remark. I was their prisoner. [...] But hadn't I always been one? With my mother, with my wife, with Bernard in the prison camp and now with these two sisters it was the same story every time; prison and gaolers. 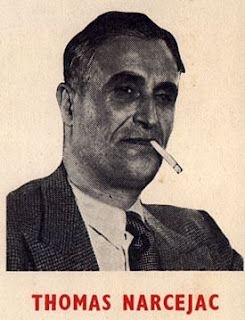 If you manage to find a copy of this book I suggest you snap it up. Like nearly all of Boileau & Narcejac's books that have been translated into English it is a difficult to find title. But it is one of the few that turns up in a paperback edition every now and then. I was fortunate (and incredibly lucky) to find a UK 1st edition in a dust wrapper for the unheard of price of £12. A miracle! It is a book I will hold onto for a long, long time.
Posted by J F Norris at 1:44 AM