Here's a sneak preview for my post on the neglected book I've chosen for Friday's Forgotten Books coming tomorrow. The book was adapted for the screen and made into an equally forgotten spy movie. 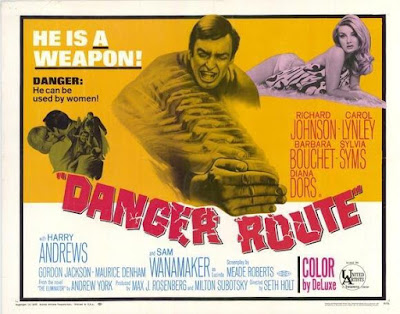 It was retitled Danger Route with Richard Johnson (the original choice for James Bond) starring as super spy and hired assassin Jonas Wilde, and Sam Wanamaker and Harry Andrews in other spy roles. The women are played by Sylvia Sims, Carole Lynley, Diana Dors and Barbara Bouchet (Johnson's former girlfriend). There is an excellent review here that goes into great detail about the film and also mentions that it can be viewed in streaming video format at Netflix. But when I went to watch the movie I found that Netflix had inexplicably removed the film. It had only been up for three or four months. Copyright issues? Who knows.

You can, however, watch the trailer for the movie below. (God bless the cinephiles who flood YouTube with these treasures!) The scenes depicted tell me that the adaptation is very faithful to the novel. I also posted the only other film clip available from the movie. It includes an edited montage of action scenes taken from a German version of the movie accompanied by the odd theme song by Lionel Bart (composer/lyricist of the musical Oliver!) and sung by Anita Harris. Bart tries his best to emulate John Barry's Bond sound and falls short of the mark. Trumpets blasts aren't enough. And those lyrics!

"To stay alive in this violent world a man has to have an edge. His is the edge of his hand!"

"A man has to travel on the danger route / A man has to toy with life and death..." Just a sampling of the not so memorable lyrics.