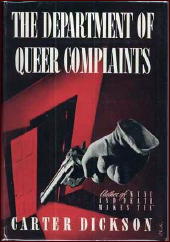 This is the only short story collection featuring "Carter Dickson's" (aka John Dickson Carr) lesser known detective Colonel March. I read the revised and updated version of this book which includes two stories previously unpublished in book form that were not in the original 1940 book. According to Douglas Greene's introduction to this updated book Colonel March was modeled after Carr's good friend and fellow mystery writer Cecil Street, aka "John Rhode" and "Miles Burton." If so, then Street must have had a great sense of humor in real life. Something that astonishes me because most of his books are rather lacking in a rollicking sense of humor. The stories in this volume were originally written in 1937 and published between 1938 and 1940 in The Strand Magazine. The final one appeared in February 1941. Two of the stories "The Empty Flat" and "William Wilson's Racket" did not appear in book form until 1963 in The Men Who Explained Miracles.
There are nine stories total and all of them deal with an impossible crime or an impossible problem. Not all the stories are about locked room murders though. There are stories about a room that disappears, footprints on a snow covered hedge that couldn't support the weight of any human, an invisible piece of "furniture," as well as the usual baffling murders with weapons that disappear or methods that seem impossible. In one case, there is even a story that was pilfered from and recycled in two well known Carr novels. 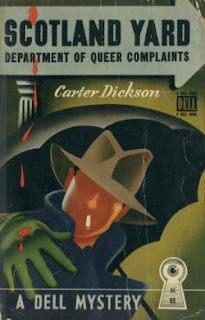 March who heads up the D-3, a special branch of the Metropolitan Police that only investigates unusual cases hence the slang name given the branch that give s the book its title. He is described by Carr as an amiable and large man (his weight of 17 stone is constantly mentioned), "with a speckled face, an interested blue eye and … a cropped mustache that might be sandy or grey." He also displays a jovial sense of humor. His gift is for noting the obvious in what appear to be puzzling problems and "he hits it right every time."
Of the original seven stories I particular liked these:
"The New Invisible Man" – This called to mind of The Curse of the Bronze Lamp in that the crime turns out not to be a crime at all. Also another instance of theatrical shenanigans as in The Problem of the Green Capsule.

"Error at Daybreak" - a man is stabbed while standing on a remote rocky area of beach with no one anywhere near him and the disappearance of his body thereafter. It may not have been brilliant in its solution, but the telling had excellent use of misdirection and so the ending came as a surprise to me.

"Death in the Dressing Room" – another case of misdirection well done. So much time is spent on a pickpocketing ring that the murder victim found in a locked room seems almost forgotten. When the murderer is literally unmasked I was impressed.

"The Silver Curtain" has an Anthony Wynne-like stabbing in a dead end alleyway. The method and means are also reminiscent of several of Wynne's books. I almost figured this one out. 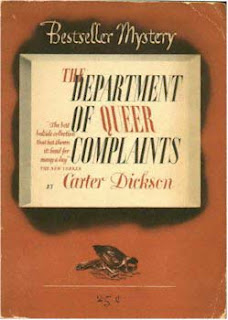 The other four were only so-so in my estimation. "Hot Money" is the one about an invisible piece of furniture used a hiding place for stolen money. But I have never considered the hiding place to be a piece of furniture in any room I've ever been in – even the many vintage apartments I've lived in. I'd call it a part of the room's construction but not a piece of furniture. That different use of the word was unintentionally unfair, but that's what comes of reading a story 70 plus years after it was written. Terminology and home construction have changed drastically. There is a silly story called "Footprint in the Sky" that takes place in the winter and has a lot to do with prints in the snow. It begins like something written by Mary Roberts Rinehart with a very "Had I But Known" air about it. The problem seems entirely contrived for the sake of creating an impossibility. It reminded me of the murderer's trick in Christianna Brand's Suddenly at His Residence (aka The Crooked Wreath) and is practically a cliché in this subgenre. "The Crime in Nobody's Room" is the story of a disappearing room and a body that seems to move after death. This includes a trick employed by Ellery Queen more effectively in a book I dare not mention. Here the culprit has a similar affliction and his behavior gives him away, but the two things he does seem once again contrived, not to mention stupid. 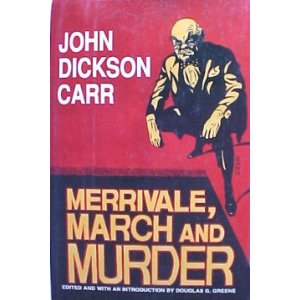 Then there is "The Empty House." The story opens with Douglas Chase, a history professor, bothered by a noisy radio blasting irritatingly loud music while he is trying complete his thesis that if accepted will provide him with a professorship at an American university. He is in competition with another history professor named K. G. Mills whom he has never met. He heads off to find the source of the bothersome radio and discovers that it seems to be coming from behind the door of an apartment with the name plate that says "K. G. Mills." He knocks on the door, a woman opens the door and he asks for Mr. Mills. She replies: "I am Mr. Mills. That is to speak with academic accuracy…my name is Kathleen Gerrard Mills, and I am the only Mills at the present moment." She, of course, is the very same K. G. Mills who is his competitor for the professorship. They exchange a few insults about each others' work before they get down to hunting for the irksome radio. Does this sound familiar? An initialed history professor who turns out to be a woman and the rival for another history professor? It should. A similar scene between two Dr. Campbells, both professors, takes place in the opening pages of The Case of the Constant Suicides a novel written in 1941 about four years after this story was written. And the woman professor in that novel was named Kathryn. Not much different from Kathleen. 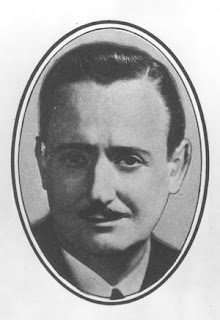 And that's not all! When the source of the radio is discovered a dead body is also found. The story reveals that the corpse is a lawyer who was investigating a haunted room (The Red Widow Murders, Night of the Mocking Widow, ) and apparently died of fright (He Who Whispers). But when the solution is revealed it turns out the murderer employed a method exactly the same as one of the deaths in The Reader Is Warned (1939). So we have a story that was cannibalized to make up at least two other books and shares plot elements with at least three other books. All of them coming after the time when the story was originally written, around 1937 as Greene tells us. This is assuredly the reason why the story was excluded from the original Department of Queer Complaints. The Reader is Warned was published only the year before and Carr probably didn’t want to be seen as a lazy writer who borrowed from himself.

For locked room and impossible crime fans this collection contains a few stories well worth investigating. Your tastes may differ from mine, but there is enough of the odd and bizarre to interest a variety of readers. It's not exactly a winner of a book all around. But I enjoyed it and especially was taken aback by the similarities in "The Empty House" with so many other Carr/Dickson works.
Posted by J F Norris at 3:19 PM