As you will learn from our good friend TomCat at his blog Detection by Moonlight A.C. Baantjer died one year ago today, August 29. TomCat asked some of the readers and writers of detective fiction blogs to join in a tribute to the Dutch writer on this anniversary of his death. I intended to write on a trio of Baantjer's books, but alas I only managed to read one all the way through while the other two I abandoned about one third the way through each. But this third kept me interested as it was very much a retro-Golden Age detective novel. And so here is a review of DeKok and Murder in Seance.

One might be tempted to call this DeKok and the Handbook for Poisoners as it is entirely preoccupied with poisons as a means of murder for the first third of the book. It is the fifth or sixth book I have read this year in which hydrocyanic acid is used to kill a victim and the third or fourth book which once again goes into a lengthy discussion on the uses of the chemical in photography, as a pesticide, and other industrial purposes. There is a chapter in which DeKok and the younger policeman Dick Vledder discuss the variety of poisons, the ability to discover it in a corpse during autopsy, why the heavy metals linger in the human body and other poisons are harder to trace, etc. etc. Because I have been reading far too many books with poison as the means this was all a little tiresome to me. But I continued going because DeKok himself is an engaging character.

DeKok -- who loves to spell his name in these English translations "with kay-oh-kay" -- is hard not to like. Alternately irascible and affable he's sharp witted, good humored and wastes no time in getting to the heart of whatever case he is working on. Here he is challenged to unmask the devious killer among a spiritualist society.  During the middle of their weekly seance at the home of the blind medium Jennifer Jordan one of the members drops dead. The victim, known as Black Julie among the circle, appears to have not a single enemy yet her death uncovers some interesting secrets, notably her real name which turns out to be Jane Truffle.

As DeKok proceeds in his investigation he is more and more troubled by the callous murder of Black Julie aka Jane. He begins to think that she was not the intended victim. This is subtly suggested through some of his questions which seem to be Columbo-like non sequiturs. He begins to ask all the women how they take their coffee. An astute reader will pick up on his reasoning for this line of questioning if he has been paying close attention to the discussion of poisons and how they can be administered. This is typical of the way DeKok runs his murder investigations. He allows the suspects to talk then takes them by surprise with an innocuous question but one that will prove to be instrumental in solving the case.

I enjoyed some of the supporting characters who seem to  appear regularly in the series. I know from reading portions of two other books that the bar owner Lowy is definitely a recurring character. Here he not only serves as comic relief but also as a key player in the murder of Black Julie. Lowy, you see, was a former thief and he heard of the attractive art collection in Jennifer Jordan's house but he and his cronies avoided it as a target when they learned she was blind. "You don't steal from no blind lady" he tells Dekok. This line of dialog will come back to haunt the policeman as the case adds two more dead bodies and the possibility of art forgery into the case. A painter named Peter Karstens, who does forgery on the side, also is featured as is his shapely lover who serves as his model and who enjoys parading around his studio au naturel. These scenes are some of the best in the book, not for the nudity, but for the dialog between Dekok and Karstens. Vledder also proves to be a perfect foil for DeKok. He is younger, more strait-laced and less tolerant of his superior who is often irreverent and eccentric in his investigative style.

This is an interesting series that I may sample more of in the months ahead. It took a while for me to warm up to DeKok but I can now appreciate him after completing Murder in Seance.  It's easy to see how he and his creator enjoyed a long life as one of the best loved characters in Dutch crime fiction.  I'm glad we have been allowed to sample nearly all of his books in these English translations. 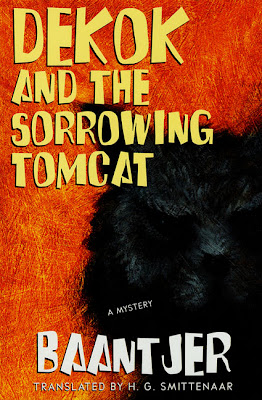 One thing more -- the translator, a certain H.G. Smittenaar, has taken it upon himself to add some very odd updated passages in these books. According to the publication history, clearly the books that I read were written long before the formation of the E.U. and the Netherlands' conversion to the Euro as its primary currency. Yet Smittenaar felt it necessary to talk of an amount in Dutch guilders in terms of contemporary Euros. This was in one of the books I didn't finish (Murder at Blood Mountain). In The Sorrowing Tomcat another one I didn't finish there is an equally bizarre discussion about an office machine that some workers refer to it as a fax yet DeKok still calls it a telex. If a book is written in the 1970s and the characters are using a telex machine, for Pete's sake call it a telex and not a fax! I was angered by this dumbing down for an English reading audience. Did the translator think Americans would have no knowledge of the past history of electronics and European currencies? I found no strange additions like this in Murder in Seance but I'm sure if two books had these weird updates then the rest of these English translations (and they number over 25) are sure to have a few more.
Posted by J F Norris at 9:16 PM