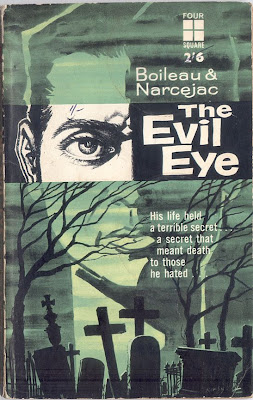 In the opening pages of The Evil Eye nineteen year old Remy Vauberet discovers he can move his legs. A big surprise for Remy since he's been languishing in bed for several years paralyzed from the waist down. He has been waited on hand and foot by two caretakers and was enjoying it all. But only one day earlier a healer visited the house and seemingly cured him by asking only a few questions. Now he's free to roam about the country.

Slowly the cause of Remy's paralysis is revealed to be rooted in the death of his mother. Talk of her death is avoided for fear of upsetting Remy, but he will have the truth. For his first day of new found mobility he takes a walk to the cemetery to pay his respects, but soon learns that his mother's body is not in the family crypt. He brushes this off as perhaps a mistake in his memory but it bothers him all the same.

When exiting the cemetery he is followed by a dog. The animal won't leave him alone and Remy glares at the dog wishing it were dead. Almost immediately after this thought the dog is hit by car and dies. Remy imagines that he was responsible for the dog's death and begins to obsess about this other newly found power. Is it possible that he can kill with a look or merely thinking of wanting someone dead?

At times seems Remy seems more like a tween than a nineteen year old on the verge of manhood. He whines, he throws tantrums, he daydreams, he imagines he is dashing lover. He even wavers between longing for the dependent life of his former idle invalid self and the desire to leave France and get a job and have some purpose. Like many teenagers he is filled with emotional turmoil and conflicting feelings. It doesn't help matters much that the shadow of his mother looms large over the household. The violent events surrounding her leaving still linger in the stifling atmosphere of the Vauberet household. Remy seems trapped even more than he was when he was paralyzed as he desperately tries to shake off a role that was thrust upon him by his family and caretakers.

It takes some skill to begin a book told from the viewpoint of character who is someone to be pitied then watch as he transforms into a villain. Then have all your perceptions of a character turned upside down when the story takes a detour into a new viewpoint. All that has passed is seen in a new light and all the feelings of pity or revulsion or disgust give way to sympathy, compassion and little bit of sorrow. It is with the character of Clementine, the housekeeper and cook for the Vauberet family, with whom the secret of the story resides. It is she who reveals all to us. Clementine, in effect, opens our eyes to who Remy really is and what really happened to his mother. You'd have to be a pretty hard-hearted reader not to feel some sadness for Remy in the final surprising pages of yet another twisty psychological tale from this master duo of French suspense writers.
Posted by J F Norris at 7:00 AM