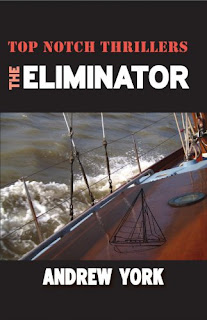 It's 1966. Spies were hot -- both in the bookstores and the movie theaters. Matt Helm was a sensation. He had already appeared in ten books and Dean Martin played him (in a very different guise) in two movies.  All 13 James Bond books had been published, were in multiple printings in paperback, four movies had been released, and the final book Octopussy & The Living Daylights was about to be released posthumously. Then mid-year in 1966 Jonas Wilde appeared on the scene. Who? Exactly.

Although a few insightful reviewers took notice Wilde and his creator Andrew York never really got the attention they were due. This is a series just as brutal and true to life as Donald Hamilton's books and filled with irresistible female characters like the Fleming books. Additionally, they are intelligent, literate, populated with fully realized complex characters and crammed with action-packed scenes that rival any contemporary thriller of the past ten years.  Luckily, for those who missed Wilde back in the late 60s and early 70s readers now have a new edition from the excellent Top Notch Thriller line (selected by hip Mike Ripley) available from Ostara Publishing. 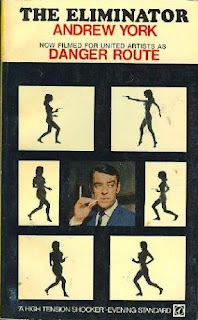 Wilde is a hired assassin who works for a nebulous branch of British intelligence known only among its elite members as "the Route." He's not your typical brawny, sociopathic, professional killer. Sure Wilde is an expert in deadly martial arts and can deliver a lethal karate chop to his intended target. Sure he has an admirably athletic body that arouses the attention of the women he encounters on the job. But he has a few traits you don't normally associate with a macho hired killer. Like for instance his fondness for rum and brandy laced cocktails like the Frisco, Daiquiri and the Alexander. To sharpen his mind and teach himself patience he plays chess and spends a lot of time sailing. His cover is as co-owner of a charter boat company in the Channel Islands. They call him "the Nobody Man." He adopts so many new identities and appears and vanishes during his assignments with the ease of a prototypical Jason Bourne that no police authority has ever traced him to the several accidents he's arranged as part of his elimination assignments.

At one point in the novel a character talks about the claustrophobic, ultra secret world of the Route:


"You belong to the tiny core within the core, within the box within the trunk within the huge shuttered mansion. You are part of the network that makes it possible for Jonas Wilde to operate."

It's a highly structured organization with only four outside members involved. Wilde receives his orders from Antony Canning, Peter Ravenspur provides new identity documents and weapons, and Stern and Bulwer help him with travel on their yacht Regina A. "The Route" has been a smooth covert operation but now Wilde wants out. Like Junior in Charles Willeford's Miami Blues he has a hankering for a normal life and longs to settle down with his girlfriend Jocelyn and forget his past. The higher level people have learned of this before Wilde has submitted his formal resignation and are planning to send him on one final assignment from which they hope he will not return alive.

Wilde learns that he must eliminate a Czech biologist who has perfected a method of germ warfare. When he receives his instructions there's something all too strange about the assignment. They want him to travel to England to do the job and he's never eliminated anyone in the country before. He usually gets a few days to prepare but they want him to leave in 24 hours. And his target will be surrounded by bodyguards and an American agent. All of it is very out of the ordinary to Wilde, but he agrees to do the job then disappear on his own afterwards. 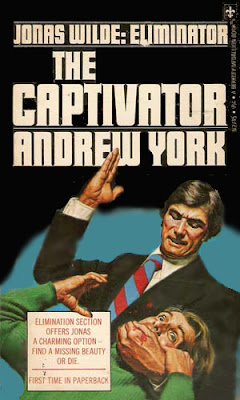 Nothing, however, goes as planned. No one can be trusted. No one is who they appear to be. It's classic spy stuff. And it's done exceptionally well here. Even the sex scenes are sexy as they should be and not sleazy as is the usual case in books of this type.
Surprisingly, in a book so hypermasculine and testosterone pumped it is the supporting female characters who are the most interesting and best realized. There is Rhoda Gooderich, a housekeeper at the estate where he must kill the Czech scientist, who Wilde must charm and seduce in order to get in and around the household. Wilde gives her several nights she will long remember (in more ways than one) even if she may lose her job for all the attention. Marita is a woman who claims to be Peter Ravenspur's niece, but who knows far too much about Wilde and his real work and calls him "Her Majesty's government's executioner." Most fascinating of all is Barbara Canning, his boss' wife, who at first appears to be nothing more than another example of the prim, neglected British spouse but who when forced into becoming Wilde's cohort takes to the spy life with an amazing hidden aptitude for the life of an adventuress. All three women are strong characters vital to the story who hold their own against a virile and wily man and are willing to risk everything to help him escape the clutches of some sadistic and ruthless villains.

York went on to write eight more thrillers with Jonas Wilde. I had never heard of any of these books prior to learning of the Top Notch Thriller reissue. The first book is such a superior example of the spy/assassin subgenre that I plan to read all the books. There are relatively affordable paperback editions of most of the Jonas Wilde books. I suggest you start with this one and decide for yourself. I guarantee you'll want to read at least another. He's every bit as good as Jason Bourne and in some respects Bourne owes everything he is to Jonas Wilde. 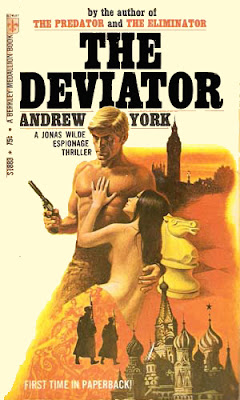 And if you haven't already seen it, be sure to check out yesterday's post about the movie adaptation of this book that was called Danger Route starring Richard Johnson, Carol Lynley, Barbara Bouchet, Diana Dors, Sylvia Sims, Harry Andrews and Sam Wanamaker.  I've included two video clips:  the original movie trailer and the opening five minutes which includes the entire title sequence (and a drippy wannabe James Bond style theme song) as well as the first two scenes of the movie.
Posted by J F Norris at 6:00 AM