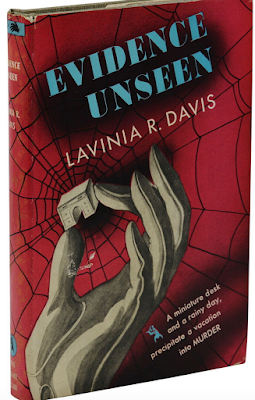 Lavinia Davis apparently struggled her whole life to improve her writing and to be taken seriously. Primarily known for her children’s books she wrote five mystery novels for adults, two of which feature antique dealer Eleanor “Nora” Hughes who meets her future husband, lawyer Larry Blaine, in the first book Evidence Unseen (1945) and settles into married life in Connecticut in the sequel Taste of Vengeance (1947). Well suited to detective novel conventions having knocked off a handful of mysteries for young readers Davis shows a flair for offbeat clueing and unusual details that make her plotting stand out from others of her school which is clearly based on the women in peril crime fiction subgenre pioneered by Mignon Eberhart and Mary Roberts Rinehart.

In Evidence Unseen Nora Hughes has just finished an involved transaction related to the sale of a miniature desk that has been restored by the only craftsman with the expertise needed to handle antique doll and miniature pieces. Dealing with the temperamental Italian woodcarver and furniture restorer has been more than she can bear. The abrupt way the sale is ended forces her to take a break from her successful antique business. She hands over the reins to her assistant and heads to the bustling seaside resort of Atlantic City, New Jersey.

No sooner has she checked in but she finds a dead body in her room. She learns the room she entered was originally assigned to Professor Elmer Hughes. The same initials on their luggage and the same last name caused a mix-up and Nora was given the wrong key. Was the victim intending to meet Prof. Hughes or Nora? Complicating matters is the fact Nora actually met the victim. He rode up with her in a limo along with a middle-aged society woman named Eudora Singleton and her companion/servant Minna Plevins. She made a note of the odd conversation in the limo as well as the package the future murder victim was carrying with him because it had the distinctive wrapping paper of the famed toy store F.A.O. Schwarz.

Nora uses her profession to her advantage as a sometime sleuth. Though not actually trying to solve the murder puzzling aspects of the crime linger in her imagination. As she makes friends and slyly questions people about what they were doing the day the man was stabbed in the hotel she studies her surroundings. Nora is always taking note of decor and furniture as a revelation of personality and character. Her keen vision and other senses also pick up unusual details like the bell logo on the package in the limo that signified it came from F.A.O. Schwarz, a missing black rubber cap from a walking stick or the bloody bandage on Prof. Hughes’ hand the day after she and Miss Singleton investigate a burglary in a cellar that was entered by a broken window. When speaking to a supposedly Swiss maid with a theatrically French accent Nora remembers that the maid slips into derogatory German slang when insulting an unliked female guest. And while pretending to sleep she hears a door open and catches a whiff of an exotic and distinctive perfume as someone enters, a perfume that can only belong to one person.

THINGS I LEARNED:  Davis reminded me of Helen McCloy in her habit of dropping arcane literary references throughout her book.  Nora is clearly well read, highly educated, and in tune with 1940s pop culture as evidenced by the following matter-of-fact allusions: 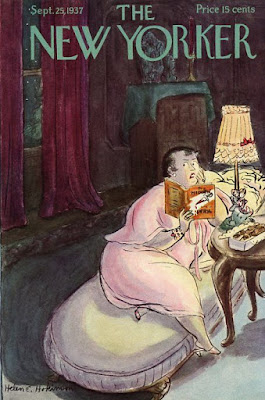 1. Unable to sleep or even relax after having literally stepped on a dead body Nora takes a sleeping pill. As the drug takes effect and she starts to drift off Davis has Nora recite this obscure poem:  "Thy sweet child Sleep, the filmy-eyed,/Murmuring (sic) like a noontide bee."  It's from "To Night" by Percy Shelley, and I'm sure these days is only known to students and professors of Romantic poetry.

2.  In describing Eudora Singleton Nora cannot help compare her to the cartoons of famed New Yorker artist Helen Hokinson.  I had to find out what these society matrons so well remembered by Nora looked like.  So here's one of Hokinson's finest examples decorating the magazine's cover (she had several New Yorker covers as a matter of fact). Very suitable for this blog and this post. You can get an perfect image of what Miss Singleton looks like and how she behaves if you study the many Hokinson cartoons found online.

3. After a night of too much drinking celebrating her engagement to Larry Nora wakes up with a slight hangover.  She thinks of Pegler's New Year's column: "Dear Teacher, Cocktails, wine, and brandy do not mix."  Off I went to find out who she was talking about. I unearthed a wealth of info on James Westbrook Pegler, notoriously outspoken columnist, "the angry man of the press", harsh critic of Roosevelt's New Deal, and most recently accused of being a Nazi sympathizer and Fascist. Here’s an overview that gives both sides of the man. More on Pegler from William Buckley here and from J.C. Sharlet here.

Evidence Unseen, overall a rather simple murder mystery incorporating a smidgen of an espionage plot, is more noteworthy as one of the finest crime novels by an American mystery writer depicting effects of war on civilian life. During the final months of the war Atlantic City has been transformed into a temporary home for soldiers waiting for reassignment or who are recuperating in a special hotel converted into a military nursing home. In fact, nearly all of the hotels in this seaside resort have been turned over to the US military and are housing hundreds of enlisted men from the Army, Marines and Navy. Nora is staying in only one of three hotels still serving as stopovers for the dwindling tourist trade.

These soldiers on the surface seem to be joking young men, happy to be home, far from combat, but the war is never far from their memory. While traveling on a commuter train Nora and Larry are jolted when the train comes to an unexpected jerking halt. Larry tells Nora that a solider pulled the emergency cord when he heard several airplanes flying overhead. Then he apologized when he realized his mistake. Even Larry is not immune to flashbacks to combat when he grabs Nora and pulls her to the ground on the Boardwalk when a car backfires. One passage is particularly moving when Nora begins to notice why the wounded soldiers are different from the other military men:

It was not the bandages that made her throat suddenly tighten, nor even the pitiful slowness of their steps. It was their silence which was almost unbearable. The other squads of soldiers who had passed had been singing or had stepped out proudly to the gala blaring of a band. But these old young men were absolutely quiet. As they passed beneath the sundeck there was no sound except the distant thudding of the sea and the pitiful lagging rhythm of their footsteps. 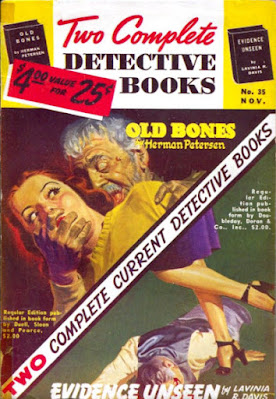 Unfortunately in this debut the mystery plot is mishandled in the final chapters. Melodramatic chaos ensues as Davis rushes to resolve the conflict and explain the motive for the stabbing death. The villain shows up with an entourage of thugs and proceeds to talk endlessly, feeble fights ensue, everyone is bound and gagged or hit unconscious, a fire is set to cause smoke and catch the eye of passing soldiers…. Piling up all these clichés on top of one another over the span of a mere five pages is the only aspect I can fault her as a novice writer for adults. Up to the less than satisfying ending Evidence Unseen is an excellent book, mostly for its wartime background and vivid characters. Davis’ commentary on wounded soldiers, the aftermath of combat, and what befalls those who saw actual fighting, killing and destruction all make this one American mystery set during the end of Word War 2 worth seeking out.

Finally, I must mention that Evidence Unseen is yet another mystery novel that uses knife throwing in the story. The way in which the idea is introduced is novel. Larry is watching several laborers amusing themselves by tossing their pocketknives at a target with Hitler's face on it.  He then asks one man what kind of knives work best for throwing and how far they can be tossed. Intriguingly, knife throwing is not used as means to commit the murder but rather as a way to get rid of the murder weapon. Though she gave us a flawed debut detective novel this odd touch seems to underscore how Lavinia Davis was trying to invigorate some of the conventions of detective fiction.  I have two more of her books to dig into.  Let us hope her plotting tightens up, she dispenses with hackneyed motifs and her unusual touches continue to multiply.