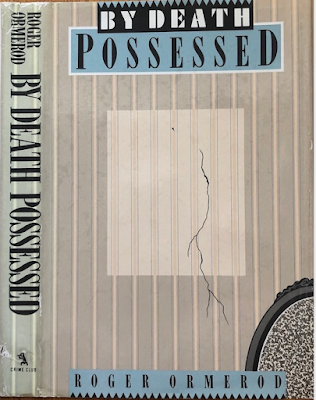 Photographer Tony Hines inherits a painting from his grandmother and takes to it to be appraised by experts on the Antiques Road Show (yes, the TV show). Dr. Margaret Dennis tells him that he has a rare painting by British ex-pat Frederick Ashe. Rare because only six of his paintings are known to exist and are held in a few museums in Europe and in private collections. Tony disbelieves her. He was always told that it was the work of his grandmother. Margaret says she knows Ashe’s brushwork and she points out the distinctive overlaid FA initials in the corner of the painting as his unique signature. “No, you’re looking at that the wrong way,” Tony tells Dr. Dennis. The initials actually read AF which stands for Angelina Foote, the name of his grandmother. Margaret assures him that he is the mistaken one. There is no doubt in her mind that the painting is by Frederick Ashe. She urges Tony to take the artwork home and insure it for £20,000. So begins Tony Hines’ unwanted adventure into the world of manic art collectors, art theft, and con artistry.

A quick visit to Grandma Angelina for background and the final word on the real artist behind the painting reveals a secret relationship and the discovery of Tony’s true heritage. His grandmother was in an arranged and loveless marriage but prior to the actual wedding had an affair with Ashe when she lived in Paris. She returned to England engaged to marry the man she did not love and pregnant with Ashe’s child. Tony's father was that child making Ashe Tony's grandfather.

She tells Tony that Ashe recognized in her a talent for painting that he fostered. As a joke she learned to paint exactly like Ashe and had so much fun that they made a ritual of their art creations. They would literally stand beside one another and paint the same scene or person, but each with a slightly different viewpoint, at a slightly different angle. It was almost impossible to tell the two paintings apart from each other as they both painted in the same style, used the same brushstrokes, shading and even shared the same palette of paint. They also signed their works using the same overlaid initials of F and A. That was Frederick’s idea – a monogram that would work for both of them on paintings that each of them had created.

Shortly after this remarkable life history Tony’s grandmother dies unexpectedly but not before he has uncovered 81 paintings in the attic. But who painted them? There is a story about the other set of paintings that involved Angelina’s enraged husband who in a fit of jealousy destroyed all the art work by Ashe and his wife – all but one painting that Angelina managed to rescue from a huge bonfire her husband lit in their backyard. It is this painting that Tony had appraised. His grandmother cannot remember exactly which ones were burned and which managed to survive. She is sure that Ashe’s were all destroyed. Only one other person may know the truth -- Angelina’s lifelong companion and servant Grace with several secrets of her own.

Together Margaret and Tony do some complicated detective work trying to figure out who painted the 81  paintings stored in the attic. They track down a British collector of rare art work with the wonderfully evocative name of Renfrewe Coombes, who claims to own two of Ashe’s paintings. Coombes is like a modern day Count Fosco in both his physical appearance and his sinister persona.  As disreputable as Wilkie Collins' archetypal Victorian villain Coombes surrounds himself with thugs and bodyguards and a secret treasure trove of rare art work. Tony at one point dwells on Coombes as a formidable adversary:

"I realize now that I must have been in a state of euphoria, brought about by the sheer magnitude of Coombe's villainy. To a person like me, he was so far from anyone I had ever before met I was quite unable to contemplate him as a serious obstacle. I was nervous, but strangely confident.  I was over simplifying."

Will Coombes be able to help Tony and Margaret or is he after the Ashe paintings to complete his own collection? 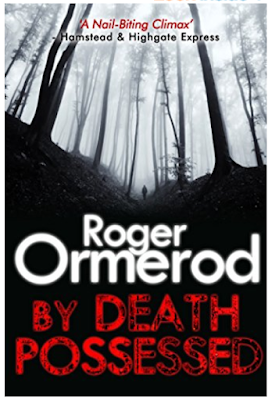 I may have given too much info about the set-up for this novel but all of that happens in only the first three chapters!  By Death Possessed (1988) may seem like pure suspense, but it is a definitely murder mystery with some surprising twists which I have learned to expect from the inventive and devious mind of Roger Ormerod.  I enjoyed this book quite a lot.  Some readers may feel there is an avalanche of double crossing in the finale and that some of the wrapping up is too pat and convenient. Despite that I'm all for a writer who will fully enter the world he has created. Ormerod is not afraid to wallow in the Machiavellian betrayals of these people who will do anything to own one of kind art.

This is quite a good example of the art caper subgenre and a nifty addition to the many crime novels featuring an Average Joe caught up in a world of con artists and criminals who uses his own knowledge (photography, to be specific ) to outwit them at their own game. Ormerod was a photographer himself and we get abundant detail on how Tony's photo lab operates. It's not just the author showing off, it's all for a purpose. Pay attention to the sections on photography and you may see what Tony is up to.  I missed it all and it was right in front of me.

Recommended for both Ormerod fans and those who enjoy mystery novels about art forgery and rare paintings.  By Death Possessed, like many of Ormerod's books is now available as a digital book (Kindle format) from Lume Books and -- luckily! -- is available for purchase in both the US and the UK.