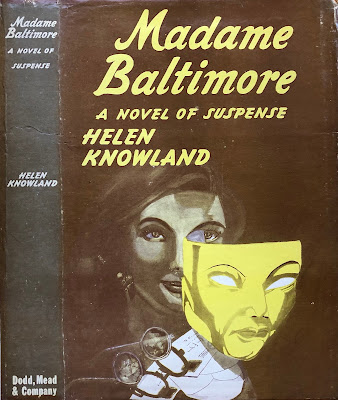 Madame Baltimore (1949) received quite a bit attention when it was first published. First, its author is Helen Knowland, wife of a prominent California senator at the time. Second, the book itself was one of the darkest studies of marriages gone awry in crime fiction to date. Had Knowland been more talented and dedicated as a writer she probably wouldn’t be the one hit wonder she became. Her personal life, however, interfered (more on that later). Still, one book is more than enough from Helen Knowland. She manages to cram a lot into her twisted portrait of infidelity and betrayal.

Madame Baltimore is quite a first novel and a signal for a type of suspense novel that would dominate crime fiction in the decades to come. Knowland was way ahead of her colleagues, the veterans of mysterydom, who were just beginning to acknowledge the transformation of the traditional detective novel into the novel of crime as psychological character study. In many ways Madame Baltimore looks back to the pioneering work of Elisabeth Sanxay Holding in the late 1930s and Margaret Millar’s early novels on the early 1940s as well as prophesizing the school of domestic suspense that would thrive in the 1950s and 1960s.

Our narrator is disillusioned Harriet Berkeley who has become completely obsessed with Washington DC wonder boy Foster Ford. In the first chapter she reveals her extramarital affair with Ford now lasting for over a year and that has been paying him $500 every month for the past four months. Initially, it seems as if she was paying Foster to remain her lover, but as the story progresses in its unique structure that travels backward in time we find out the money is for an entirely different reason, one that Harriet herself is responsible for having created. Harriet is not a nice person. The more we read about her the more we discover that she has allowed her desire for Foster to ruin her life and all those she thought she loved.

From the start we know that Foster himself is a cad because very soon into the story Harriet tells us she is being blackmailed. Foster demands he continue handing over $500 or he will tell her husband that she is not only cheating but that she is paying him and let Bob, her husband, draw his own conclusions about the money. There is an air of doom about them. Someone is going to pay dearly and Harriet will decide who that person is.

A discussion about a letter from an anonymous woman Harriet insultingly terms “Madame Baltimore” comes up in conversation. Harriet is incensed that Foster appears to have another lover. She wants to end their affair but Foster threatens blackmail. Then we learn that the letter is written by Harriet in an elaborate scheme to create another fictitious mistress so that she can break up Foster’s marriage. It all begins to seem like some dreadful soap opera plot. But things turn deadly very quickly.

As with all simplistic fantasizers Harriet gives no thought to possible consequences such as Drucie, Foster Ford’s wife, not willing to act according to Harriet’s plan despite her having confided that she is more than attracted to charming Charles McAllister. Funny how people have minds of their own, and often act out of a character. In her naïve imagination where Foster belongs only to her Harriet consistently fails to see that the people she ought she know well – her friends, her husband and even Foster himself – can make their own decisions and do so in ways that repeatedly backfire. 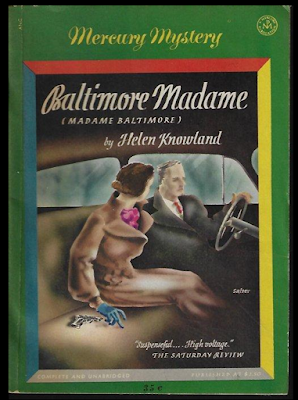 Ultimately, Madame Baltimore is modeled on a classic inverted detective novel. We know that Harriet is a schemer, a faithless wife and deceitful friend and is planning to murder Ford. Like many of these classic forms of the subgenre the reader is waiting for Harriet to discover her fatal mistake that will reveal her as the guilty murderer. The unusual aspect of this inverted novel, in addition to its rather ingenious construction of shuttling between past and present in order to build suspense, is that Harriet has not made one fatal error but a series of mistakes, all of them illogical and stupid, all of them because she fails to think clearly in her moments of madness. It’s the study of an obsessed mind slowly crumbling under pressure. A fantasy of a silly love letter from a fake person leads to more lies and betrayal.
Knowland has written her novel from Harriet’s point of view and yet as Harriet’s state of mind builds from worry to fear to paranoia each of the other characters becomes more and more distrusting. What about that other letter on pink paper, the letter Harriet didn’t write? Who wrote that one? Is there really another mistress in Ford’s life? Or has Drucie caught on to Harriet and playing mind games with her? There is an element of Gaslight that pervades the novel. Even though we know that Harriet is a nasty warped woman we wonder if her friends and husband are just as nasty. Who really knows what’s going on? Is everyone lying?

Knowland loads her story with plenty of unexpected twists. At one point there is an incident that almost makes this an impossible crime mystery. But that mysterious incident is readily explained within a few pages. If anyone ever finds a copy of this with the dustjacket I suggest you not read the spoiler-laden front flap. Not only does the blurb make the story seem as if the book is a whodunnit – and it most certainly is not – it ruins one of the most shocking surprises, a scene that occurs close to the book’s climax, well past the halfway mark! Very poor decision from the marketing team.

That this kind of novel of deceit, lies and betrayal is set in Washington DC is telling. Helen Knowland was married to one her era’s leading and most prominent Republican senators and clearly had inside dope on the movers and shakers in Washington. Foster Ford is supposed to be representative of the smarmier opportunists . She describes Foster as a man who “made a profession of his hobbies, without pay.” While he may not be making much money he is earning plenty of prestige and building a reputation as 1940s style influencer. 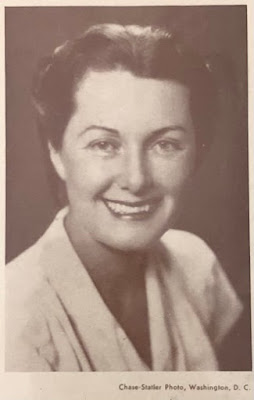 Helen Herrick met her husband William Knowland in grade school. Against parental advice stating they were too young to marry, Bill and Helen eloped on New Year's Eve 1926; Helen was 19 and Bill only 18. After a brief stint as a California state senator and following service in the US Army during WW2 Knowland was elected to the US Senate in 1945. He and his wife moved to Washington DC. While a US Senator Knowland served as leader on various committees eventually becoming Senate Majority Leader in the Eisenhower years.  He remained a US Senator from 1945 through 1959.

In 1972, four years shy of their 50th wedding anniversary, the story of Madame Baltimore sadly came true for Helen Knowland. Her husband had left politics to run his father’s newspaper in Oakland but also had been cheating on Helen for decades, the first occurring in 1958 and lasting nearly three years before the woman, Ruth Moody, died of a stroke in 1961. While in Oakland Bill got involved in real estate deals to help cover gambling debts. The mob was involved and his life began to unravel. Helen divorced him in 1972 after his second affair with Ann Dickson was uncovered.  Knowland married Ann but two years later in 1974, overburdened with debt, shame and guilt, he committed suicide. His rise to political power, his years as Republican Majority Leader during the height of the Eisenhower era, his eventual fall from grace in Washington, and his ruinous final years in Oakland are all detailed in the biography One Step from the White House: The Rise and Fall of Senator William F. Knowland by Gayle B. Montgomery & James W. Johnson.

Though Anthony Boucher mentions in his introduction to the digest reprint retitled Baltimore Madame that Helen had several books in the works, including another mystery novel, none of them were ever published. She had dabbled in writing, a few articles and short stories made it to print, but not one of her planned three books  -- a mainstream novel about Washington DC life, a historical western, and a mystery novel. The digest reprint appeared in 1957 during the heyday of her husband's political career. At the time of the reprint's publication William Knowland was Senate Majority leader, at age 45 the youngest senator ever to hold that position, and his dalliances were already surfacing. Perhaps real life was far too dramatic and demanding to ever compete with Helen's dark and criminal imaginings on paper.