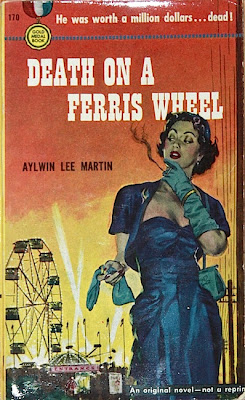 Here's a pop quiz, class. What do you think is the most overused plot gimmick in the world of vintage detective novels?

A. The secret passageway
B. Oxalic acid as a murder weapon
C. A twin or triplet is revealed to be the murderer
D. Knife throwing in a suspect's past life

Ten points if you answered D. Even though the others show up time after time, knife throwing is easily the most tiresome, the one that will get me rolling my eyes and uttering "Oh please, not again" more than the others. In the past two years alone I have read seven books that include knife throwing in the plot. Three of those books were locked room or impossible crime novels and the solution to the impossibility relied on the murderer's expert handling of kitchen utensils. But I bet not many of you have ever read the prizewinner in all of mysterydom dealing with knife throwing. I award the blue ribbon in knife throwing to Aylwin Lee Martin's Death on a Ferris Wheel (1951). Why? Because there are four – count 'em four! – knife throwing suspects in this book. Two of them are women! That makes for a potentially lethal group of suspects, doesn't it? You don't want to be upsetting these people at a dinner party or in a butcher shop.

The book opens with the discovery of the murder victim descending from his fatal ride in the titular amusement park ride. His throat is gashed terribly and it is determined that the only way he could've been killed was by a knife thrown at him as he was making his way down in the Ferris Wheel. That's some very expert knife throwing if you ask me, but as the sharp witted Captain Homer Aselin notes it wasn’t necessarily the throat that was the target. Anywhere on the body would have served the killer's purpose. Throat, chest, back -- he would've been dead no matter where the knife landed. 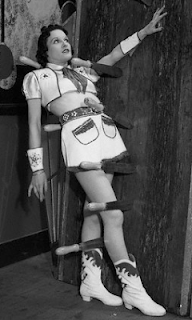 I guess it shouldn't be surprising that there are so many knife throwers in the book. After all, the setting for the crime is a travelling carnival and two of the suspects happen to be in show business. Or were at one time. As luck would have it both of the women who also at one time tossed a few blades back in the day were also former wives of Floyd Anthony, the murder victim and an ex-vaudeville performer who worked carnivals as a would-be comic, knife thrower and the handsome male half of a dance duo.

One of the highlights of the book is learning a lot of carny slang.


He was tossin' broads when he wasn’t grindin' for a G-String act.

He was dealing a three card monte game when he wasn't talking to the crowd about a striptease act.

A "skinned mush" is the cane a barker uses as a prop to draw attention to himself and the acts. "Mitt camp" is a palm reading tent. Classic stuff! I also found out that "fuzz" as slang for a policeman comes from carny lingo. Reading paperback originals is a real crash course in fading aspects of American pop culture.

At first the murder seems to be tied to the apparent theft of a diamond ring valued at $15,000 and Matt Hughes, our lawyer/sleuth, is hired by Arnold Kent to represent his wife who he suspects of aiding in the theft of the ring. But while uncovering the truth behind the disappearance of the ring (which eventually turns up in Anthony's personal effects) Hughes gets in over his head. Anthony turns out to be a former husband of Mrs. Kent who used to be his dancing partner under her stage name of Nola Barrett. And the theft might have been a cover-up for a blackmail payoff. This is all quickly learned within the first three chapters.

But that's only the beginning of the complicated plot. Soon the story becomes an overly involved tale incorporating a crooked casino and drug operation, bigamous marriage, elaborate blackmail schemes, two-timing lovers and murderous revenge. It's all pulp magazine rehash, not badly told, with some pretty good dialog, heavy on incident and with a few colorful characters including one of my favorite period un-PC stereotypes -- the gay pretty boy sadist. Oliver St. Julian is his name. (What else could it be?) He is, of course, often called a fruit, a pansy, or a nance but is always ready to smash someone in the face when called a name. Is he a knife thrower, too? You bet your gleamin' shiv edge he is!

In the end it's all a bit too excessive. The finale is a cumbersome and talky revelation of multiple secrets delivered in the old-fashioned B movie method with Hughes making page length monologues while the various villains throw tantrums punctuated with a healthy dose of swear words or collapse into confessional hysterical outbursts. "Yes, I killed him," says one character. "And I'd do it again and again." Or until there were no knives left to fling.
Posted by J F Norris at 12:00 AM