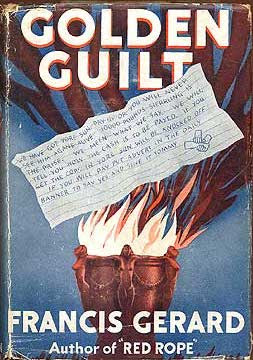 THE STORY: Sir John Meredith is off on another adventure involving kidnapping, revenge and another bizarre cult that hints at supernatural origins. In the prologue of Golden Guilt (1938) two men and one girl are “anointed” and banished to the Place of Fire “never to return until such a time as [they] have restored that which is lost and have avenged the sacrilege.” This outlandish thriller with a smidgen of a detective novel plot is populated with Aztec descendants, Russian gangsters, Mexican terrorists, a gang sporting tattoos of Three Clasped Hands, and a group of zealots from a lost kingdom in search of the legendary Golden Fleece.

THE CHARACTERS: Meredith does his best to prevent the kidnapping of Lord Allingham’s son Bobby with the help of his wife Juanita, Sgt Beef (who is remarkably related to Leo Bruce’s Sgt Beef!), Bradford and Col. Merryweather-Winter. Along the way two characters from previous books turn up, Sir Hector MacAllister and Clifford Craigworth, and assist our heroes in the complicated plot.

Add this title to the ever growing list of mystery novels and thrillers with a burial vault break-in. (I swear I need to do a post on this topic soon). After a funeral the Allingham family vault is discovered broken into and smashed coffins littering the interior of the chamber. Evidence points to the M.O. of “Soup” Smith, a notorious safecracker and burglar who preferred dynamite over picking locks to gain entry. Smith was recently released from prison and the search is on to track him down. 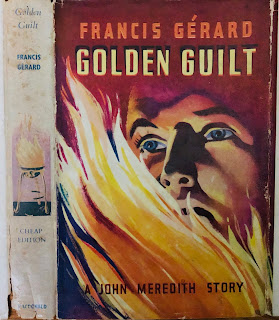 Some of the supporting characters were my favorite people in the heavily populated story and Gerard enjoys taking advantage of their eccentricity to indulge in his ever-present ribald and vulgar sense of humor. Lord Marshington, for example, is an aristocrat obsessed with growing roses. Meredith apologizes for interrupting him while in his garden and Sgt Beef is appalled when he hears his lordship mention he was planning on putting muck into Dorothy Perkins bed. Beef thinks the worst of this “supposed gentleman” who would throw horse manure into a woman’s bed chamber. The scene turns into an Abbot and Costello routine of wordplay and misunderstanding thankfully lasting only a few lines. But even in its brevity it made me laugh out loud.

INNOVATIONS: Like Secret Sceptre Gerard peppers his story with frequent allusions to Golden Age detective fiction writing and characters which supports my theory that these books are meant to be a send-up of the entire genre. See the QUOTES section for some of the better references.

This was my second favorite of the weirder entries in Francis Gerard’s series featuring Meredith, a British Foreign Office agent turned policeman. Brimming with action and eccentric characters Golden Guilt is another is Gerard’s near parodies of the ultra-heroic adventure thriller which originated with H. Rider Haggard and his books about Alan Quatermain and Leo Vincey then carried into the often self-parodying adventures of pulp magazine heroes. As for the capture and reveal of the villains of the piece all is not as obvious as it first appears. Gerard does a fine job of misdirecting the reader into believing that one character is the brains of the kidnapping then performs a nifty reversal in the final pages. In doing so he simultaneously supplies the requisite twist to the crime plot making this more than satisfying as a detective cum adventure novel. 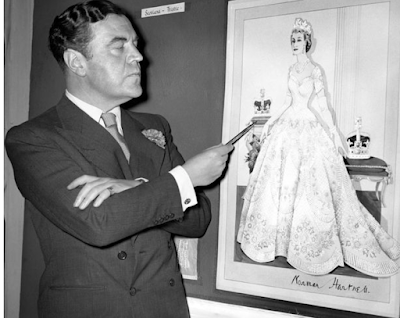 THINGS I LEARNED: One of the women characters is wearing a “…really complicated, though apparently severe black Hartnell dress.” Ignorance of early 20th century designers led me to look up Norman Bishop Hartnell (1901-1979). Probably much better known in the UK than in the US Hartnell was a fashion designer who did most of his work for the Royal Family. He was given the honor of Royal Warrant as Dressmaker to the Queen Mother in 1940 and the same for Elizabeth II in 1957.

QUOTES: “We found everybody’s finger-prints there…!” He snorted “You’d have thought, wouldn’t you, with all this damn silly rubbishy detective-fiction stuff that’s written nowadays that everybody, down to a three-year-old, would know not to handle a thing like that.”

“I’m not really trying to behave like a detective in a book, but you know the more I read detective fiction the more I realize that the detective heroes are quite right to behave as they do and keep their mouths shut until the denouement. After all, nobody likes to look a fool…”

“And you’re equally certain that there’s no pointer anywhere?” suggested Meredith. “No nice bloody thumb-marks left on a clean piece of white paint, for instance? No scented or monogrammed handkerchiefs dropped outside the window? No uneven footprints clearly indicating the presence of a red-haired French sailor off a Dutch boat with a bad limp in his right foot, and no butts of cigarettes of a tobacco only smoked by members of the Egyptian Embassy”? . . . No, I suppose not.” John sighed. “I always think those fellows in fiction have the easier job of the two.”

There had always been an amicable feeling of rivalry between Matthew Beef and his more famous cousin Sergeant William Beef, who has so signally put the amateur detectives in their place in the case which had made his name, and which had been chronicled by Mr. Leo Bruce under the heading The Case for Three Detectives. Moreover, Beef, who rather fancied himself at darts, could never quite beat his cousin William […] who was apt to be a little superior with Matthew over his recent successes.

“A stone jar which contains vitriol contains an evil thing, but the jar isn’t responsible for its contents. Madness is an evil, there’s no getting away from that; but does that necessarily make the madman, the vessel housing this horrible ill-balance, an evil thing?” 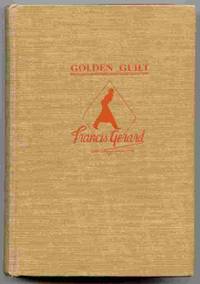 EASY TO FIND? Much to my surprise I found several very affordable used copies of Golden Guilt. There are couple of the Thriller Book Club edition (some with dust jackets) as well as the Cherry Tree paperback offered for sale from various online sellers. But be warned – the later Cherry Tree paperback reprints tend to be considerably abridged from the original text. Even more remarkable I also found six copies of the US first edition and two of the UK edition (later printings each) all of them were under $20. One of the UK edition comes with a DJ in better condition that the one I picture here. The remaining of the hardcover copies (with and without DJs) range in prices from $30 for the UK ed in DJ to $100 for a US first edition in “about fine” condition with a “very good or better” dust jacket. As far as I know none of the Francis Gerard books have been reprinted since the 1950s. Happy hunting and reading!
Posted by J F Norris at 12:16 AM