FFB: The Silence of the Night - Roger Ormerod 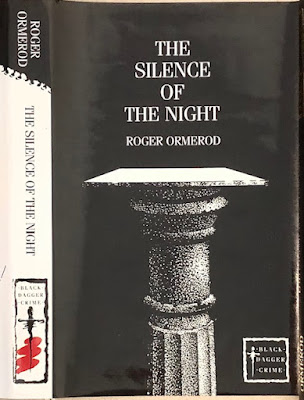 THE STORY: Weary of the world of police work David Mallin is now in security work, his most recent assignment is to guard the artwork – in particular, a Chinese vase from the T’ang dynasty – at an upcoming gala in the home of Hillary Keane, art collector and real estate mogul. But the night before the gala Keane’s home is burglarized, a man is murdered, and the vase is smashed to pieces. Mallin offers to help find out exactly what happened when his girlfriend’s uncle is implicated in the burglary and possibly the murder. Because Mallin was on site at the time of the burglary and was suspiciously knocked out by an unknown assailant the police immediately suspect the security guard of being involved in the crimes. Mallin works furiously to clear Elsa’s uncle and himself of all culpability.

THE CHARACTERS: Dave Mallin is modeled on the American private eye heroes of the 1940s. The entire book is imbued with the conventions of an action-filled pulp thriller. He speaks just like one of the generic wiseguy private eyes from books and movies of a bygone era. Very odd for a British book published in 1974. But he’s inherently likeable as a protagonist and I liked his irreverent treatment of his former police colleagues. He has all the inside dope on how police officers think and operate and this gives him an advantage over them as he resorts to a battle of both wits and methods in figuring out what happened at Killington Towers.

Elsa seems to be present only as a foil for Mallin’s coarse personality. In contrast to her boyfriend Elsa is refined, a wannabe sophisticate, who longs for a better behaved, more gentlemanly man in her life. She’s constantly bickering with Mallin and adding insult to injury flirts with all the well-to-do art collectors. One of these men, Martin Vale, spends a lot of time with Elsa. She accepts his attention mostly to irritate Mallin and because the guy has a Porsche. There is a running gag about her own car that has a faulty starter and a kind of stupid subplot about trying to get it repaired. Her Rover sometimes starts up fine, and at other times fails to start at all. This serves as a gimmick to keep the arguing flowing throughout the story. But what at first I thought was just dumb jokes and filler turns out to be an important plot point. Cars, their engines and whether they run well or not all turn out to be significant to the story and help Mallin defeat the villain in the end.

Speaking of subplots -- in addition to all the talk about art and antiques, specifically ancient Chinese porcelain, there is a parallel story about 17th century playwright manuscripts making this both an art mystery and a bibliomystery. The murder victim is Cameron Frazer, an oddball researcher obsessed with proving that Christopher Marlowe was the true author of Shakespeare’s works. He has managed to infiltrate the Keane household without invitation and holed himself up in the library refusing to leave. All this because in addition to the fine art collection Killington Towers houses a library of rare books and manuscripts. Keane inherited the library from the previous owner. Among those rare manuscripts is a Shakespearean first folio that Frazer was poring over at the time of his death.

Even more intriguing is the fact that Frazer is deaf. This presents an intriguing impossible crime of sorts. The police presume that the burglar was startled in his theft of the vase, dropped it, broke the thing, and then murdered the researcher so that he could not identify the burglar. But Mallin maintains that the murder was an inside job and that the killer must have known that Frazer was deaf otherwise he would not have attempted the burglary in the first place. So if it was an inside job why was Frazer, a deaf man, killed? He would not have heard anything, not a door being jimmied or a window being raised, and certainly not the smashing sound of the vase when it broke. It’s all rather mysterious. Mallin wonders which was the intended crime – the murder or the burglary? Was there even any crime at all? Was the burglary faked? Was the murder an accident?

Elsa’s uncle was involved in a shady deal trying to acquire the first folio for one of Keane’s collector friends, Alton Bloome who is visiting from Minnesota. Bloome is also interested in the Marlowe/Shakespeare conspiracy theory and has made manuscripts a hobby of sorts. The police are convinced the murder is the primary crime and that the vase being smashed was an accident as the murderer fled. But Mallin is not so sure it’s as easy to explain away. Elsa insists Mallin get to the truth and prove himself worthy after having failed to do his job of protecting the vase and other artwork.

Then it turns out that there is a copy of the T’ang vase in the possession of Martin Vale, local automobile dealer and the same man Elsa has been hanging around. Mallin begins to wonder if the burglary has something to do with collector jealousy and the murder was not at all the primary crime.

INNOVATIONS: As usual Ormerod fills his story with loads of red herrings among the well placed valid clues. I fell for the most obvious red herring while dismissing all the automobile talk as filler. None of the car talk, however, is filler. You don’t need to know the difference between a Rover (Elsa’s car with the faulty mechanism), an Oxford (Mallin’s car) or a Porsche (Vale’s alluring car) but any reader ought to pay attention to scenes when Dave and Elsa are arguing about whether the starter works or not. I should have known better having just read a book where I skipped over all the talk about photography and missed one of the best clues in that other book.

The smashed vase is of greatest interest to Mallin. He collects all the pieces and has it reconstructed by an art forger/expert he knows. When the vase is reassembled there is a small piece missing. This sets Mallin’s imagination afire. Elsa’s uncle was in the area of the library where Frazer was killed on the night of the murder and burglary. But he claims he did not hear the vase being broken. Mallin uses this as proof of his theory that the vase was broken elsewhere and the pieces were scattered around the floor to make it appear that it was broken. The missing piece is most likely to be found in something that belongs to the burglar/murderer. He believes the vase was stolen. He mentions this to the police referring to the incident as “the crash that wasn’t heard” -- The Silence of the Night, as it were. Alwright, the detective in charge, quips, “Like the dog that didn’t bark?” and laughs at Mallin. 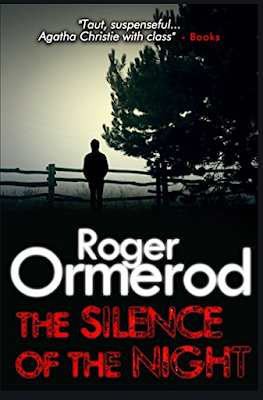 ATMOSPHERE: In keeping with the American private eye influences that permeate The Silence of the Night Ormerod creates a cinematic set piece for his climax. All of the car business leads to a breakdown in both mechanics and Elsa and Dave’s relationship. The two hot headed lovers break up seemingly for good and Elsa storms off to find Vale. Mallin ends up being pursued by one of the bad guys and we get a full blown car chase, shoot out culminating in a explosive wreck as the book’s climax.

Humor is interspersed making the book all the more engaging and readable. I particularly liked the absurd bit of business when Mallin wants all the male suspects to speak in a pretentious American accent in order to figure out who faked a phone call. The scene allows Ormerod to make fun of American gangster movies with one of the more amusing characters doing a near perfect impression of James Cagney snarling out 1940s movie dialogue. The tension is cut in an original way and the entire scene undermines the villainy of the professional criminal who was exploited by the murderer.

Overall, The Silence of the Night is an entertaining and unusual detective novel blending traditional Golden Age plot motifs, American hardboiled narrative style and Ormerod’s original use of contemporary and popular culture in spreading out innovative clues. My only complaints are 1. the villain in this book is rather obvious (if not his motive) 2. the only American character in the story, Alton Bloome, tends to speak in British idioms that no American would ever use. For instance, he says “set that down” rather than “put it down over there”. But this is just nitpicking on my part. I enjoyed meeting Dave Mallin, Elsa and the rest of the regular gang and look forward to reading other books in the Mallin series. There are sixteen books in this series, most of which are available in digital book format from Lume Books as well as fairly affordable used copies from online sellers and used bookstores.

BONUS!  Try to find a copy of the 1993 Black Dagger reprint (pictured at top and the one I own). There is a brief introduction with some biographical info on the author written by our friend Martin Edwards!  He was writing introductions back in the 1990s for the CWA sponsored "Black Dagger" reprint series. This book and five others were selected by CWA members Peter Lovesey, Marian Babson, and Peter Chambers.  If all of them are as unique as this book I'll be looking for more of them. 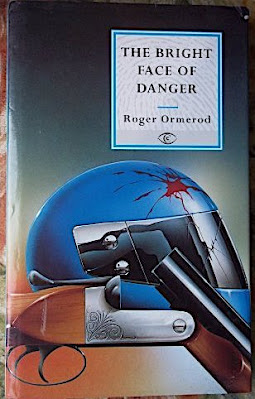