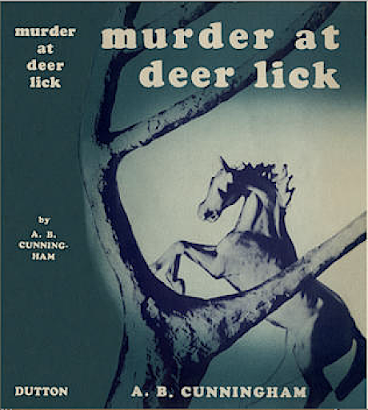 THE STORY:  Powerfully built, intimidating but respected physician John Bruce is found stabbed. His pistol still in its holster, his fierce and equally intimidating horse is roaming nearby a bit confused. How could the man have been knocked from his horse and killed? The horse was known to be "as savage as a boar hog." No one could have approached the doctor while on the animal without major difficulties. Yet Dr. Bruce was discovered off the horse, contusions on his arms, his throat cut and multiple stab wounds to his body. Even more remarkable, the pistol still in its holster proves the doctor never had a chance to defend himself. It was some sort of surprise attack but from where? The body was found on an open roadway beneath an old tree. Nowhere for anyone to hide. Sheriff Jess Roden is faced with this puzzling murder and some surprising additional mysteries in the aftermath Dr. Bruce's brutal killing.

THE CHARACTERS:  Murder at Deer Lick (1939) is the first detective novel in a long series featuring Sheriff Jess Roden, the sole law official in the fictional county of Deer Lick in Kentucky. Roden, as I've discussed previously here and here, follows in a long line of rural fictional detective who use their knowledge of animals and plants to help gather evidence and solve the crimes. Tracking of footprints in these books is very often not so much about human feet as it is about animal tracks. In the case of Dr Bruce's murder someone has cleverly obliterated all traces of tracks and yet in the end this obliteration turns out to be a dead giveaway as to the identity of the murderer when Roden witnesses exactly the same pattern being made somewhere else while investigating the crime. 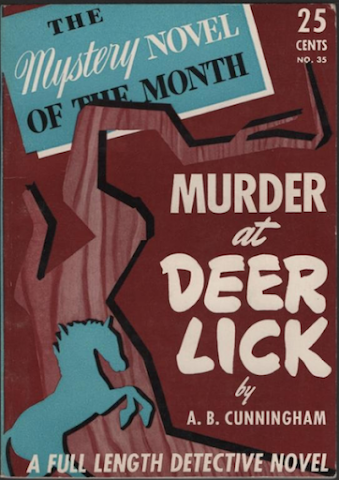 In one of the opening chapters we get an elaborately detailed biographical sketch on just how Roden has used his knowledge of the woods, streams and fields of Kentucky. It's a brilliant example of what sets a country detective apart from his urban colleagues and is as eye opening as the first glance of a meteor shower. His talents include identifying fish with only a single clue ("a pike by a single tooth, a bass by the anal fin, a perch by one scale...); secrets of mammal life ("..the difference between the smell of muskrat and mink, the shape of a gray squirrel's teeth,...the deep-heeled track of a polecat..."), reptiles ("the size of turtle eggs..., the smell of a copperhead..."), and birds ("how a [heron] made its nest"). He knows the tastes and scent and texture of dozens of trees by touching, smelling or tasting their leaves, nuts and roots. All these observational skills of the natural world only serve to fuel his observation of humans: "He was aware that Ed Lefferton held his cud of tobacco in his right jaw, ...that Mun Lee was left-handed, that little Bo Strange talked to himself, that Potbelly Losee always wore an asafetida bag suspended from a dirty twine string around his great fat neck."

That last fact is crucial in solving the murder of Dr. Bruce. When Losee is singled out by the townspeople as a possible suspect Roden learns that the treasured asafetida bag went missing and Potbelly was beside himself with worry. Later, that bag is found clenched in Doc's hand and things look bleak for the poor mentally retarded young man. Mute since birth and feeble minded Potbelly can barely understand simple sentences, but his mother has a special way she can communicate with him and calm him where all others fail. She asks Roden to do his best to prove that her son is innocent. Mrs. Losee knows in her heart that her dear son could never have killed anyone though he certainly has the strength to harm grown men.

Other suspects include Mun Lee, a young man with a secret who wants desperately to leave town with his girl and is adamant that Roden has no business knowing why he wants to flee. Roden prevents Mun's flight on several occasions, once resulting in a fist fight. Perhaps the most suspicious of the lot is Ezekiel Stout, a crazed preacher, who had a disagreement with Doc Bruce over the way to treat Middy Wily's smallpox. Stout took Middy out of the physician's care, very much against Doc's direct orders, to a prayer meeting trying to save the isck woman. She died in the makeshift church surrounded by Stout's zealous followers; prayer no aid against the ravages of disease. It doesn't help matters that Roden is prejudiced against the preacher who he views as a hypocrite who he knows is a wife beater and sadist.

This last bit is an excellent touch in direct contrast to contemporary novels set in the South in which most law officials back up the local preacher and are devout Christians. Roden has an intolerance for fake religion and disdains blood and thunder style fearmongering in the guise of teaching the Lord's ways. Cunningham seems to be voicing his own opinions about zealotry and religious hypocrisy in addition to adding another dimension to Roden's character as this lengthy section vehemently denounces Stout's methods and his foolish, unquestioning followers.

Roden is assisted by his deputy Cary Davis, a coffinmaker named Ed Lefferton, and the local coroner, who is yet another of those forerunners to the cynical medical examiner with a deep black humor, a now common character type. Cunningham foreshadows another convention of crime fiction series novels in that many of the supporting characters have mini-dramas of their own to deal with. Apart from Mrs. Losee's fear of Potbelly being arrested, tried and hanged for the physician's murder there is the drama of Ed Lefferton's ailing wife Molly, the rivalry between local midwife Aunt Minervy and Rev. Stout, and Mayme, a housekeeper formerly employed by Doc Bruce, who makes several attempts to seduce Roden even managing to inveigle her way into his home with the promise of skilled cleaning and delicious cooking. 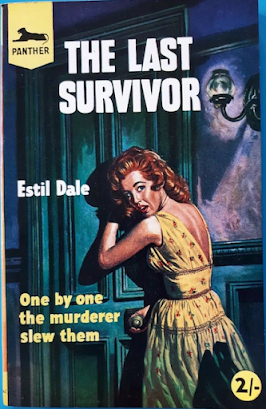 INNOVATIONS: Cunningham has invented a rather bizarre method of murder in the death of Doc Bruce. This will prove to be an ongoing feature in the Sheriff Roden series like an accidental death that is actually an cleverly engineered poisoning or in another book a death trap of mechanical ingenuity that rivals the imaginative murder means in the John Rhode detective novels. The manner in which Roden stumbles across the actual method of Doc Bruce's murder is both gruesome and efficient. Witnessing this unexpected episode forces Roden to re-evaluate nearly all the evidence he has at hand.


THE AUTHOR:  Albert Benjamin Cunningham (1888-1962) was born in Linden, West Virginia. He was a educated at Muskingum College in Ohio, did graduate work at New York University where he also received a PhD in sociology and psychology. After serving in World War I Cunningham taught English at Texas Tech University from 1930 to 1945. In addition to the 21 detective novels featuring Jess Roden he wrote one crime novel under the pseudonym "Estil Dale" and several mainstream novels as "Garth Hale." During the late 1920s Cunningham also wrote some mainstream novels under his own name prior to turning exclusively detective fiction in 1939.
Posted by J F Norris at 3:06 PM